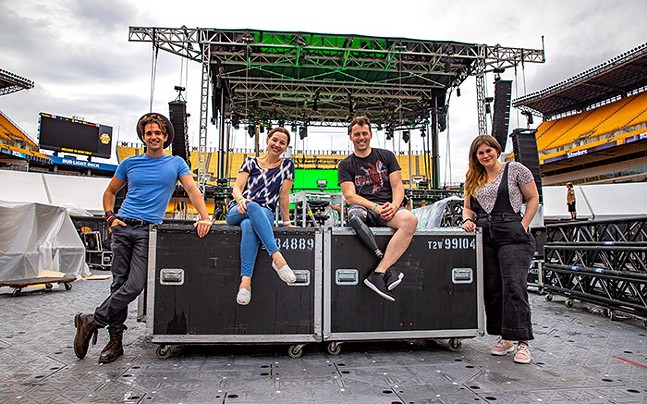 CP Photo: Kaycee Orwig
The stars of Pittsburgh CLO's The Wizard of Oz in front of the stage at Heinz Field: Dan Deluca (Scarecrow), Jessica Grove (Dorothy), Evan Ruggiero (Tin Man), and Drew Leigh Williams (Lion)
The Pittsburgh CLO is coming back after a year of being in the dark due to the pandemic, but not to where many might expect. Instead of the Benedum Center in Downtown Pittsburgh, the theater company is making an unprecedented return at the home of the Pittsburgh Steelers, trading in football helmets and black-and-gold jerseys for a witch’s hat and a yellow brick road to debut their 2021 summer season opener, The Wizard of Oz, at Heinz Field.

“Toto, we’re not at the Benedum anymore,” says CLO executive producer Mark Fleischer. A stage has been built in the end zone to showcase the theater’s most talented performers in a two-show series titled “Summer Under the Stars” featuring the aforementioned Frank Oz classic and Pittsburgh CLO’s Broadway Musical Celebration in honor of the company’s 75th anniversary. American Idol alumni Clay Aiken, originally slated to star in The Drowsy Chaperone this July at the Benedum Center before the pandemic forced the CLO to cancel their original season line-up, is now hosting Broadway Musical Celebration, and both shows will be accompanied by the Pittsburgh CLO Orchestra. The unorthodox venue will hold up to 4,000 guests, including tables and chairs directly on the field in front of the stage. 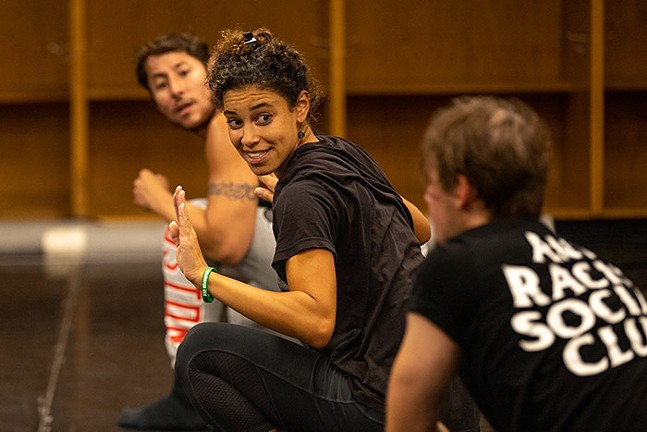 CP Photo: Kaycee Orwig
Pittsburgh CLO dancers learn new dances for The Wizard of Oz in a rehearsal room inside Heinz Field.
The Wizard of Oz, the first installment of the series, begins on Thu., July 8 and continues through July 10.

“It’s a show that grandmother and grandfather loved, and grandchild, and everyone in between,” Fleischer says. “The idea was we thought it was a perfect show to bring neighbors and family members out together in the outdoors.”

The first day of rehearsals was on Thu., July 1. The skies were grey, and the mid-summer humidity lingered in the air, but that didn’t seem to bother the cast of The Wizard of Oz. The stars of the show who play Dorothy (Jessica Grové), Tinman (Evan Ruggiero), Scarecrow (Dan DeLuca), and Lion (Drew Leigh Williams) appeared in awe seeing the stage being completed on Heinz Field for the first time. “Summer Under the Stars” will be their first time returning to a stage in over a year.

“If you’re a native Pittsburgher, you love Pittsburgh sports — that’s the biggest thing. So to be doing a musical on an NFL field is absolutely so exciting,” DeLuca says. “It’s a sense of community and homeness.”

CLO’s original production Broadway Musical Celebration follows Oz, launching on Wed., July 21 and continuing through July 24. It’s a 90-minute ode to Broadway featuring iconic numbers and medlies from a variety of popular Broadway musicals, such as Mamma Mia, In the Heights, The Color Purple, and An American in Paris. 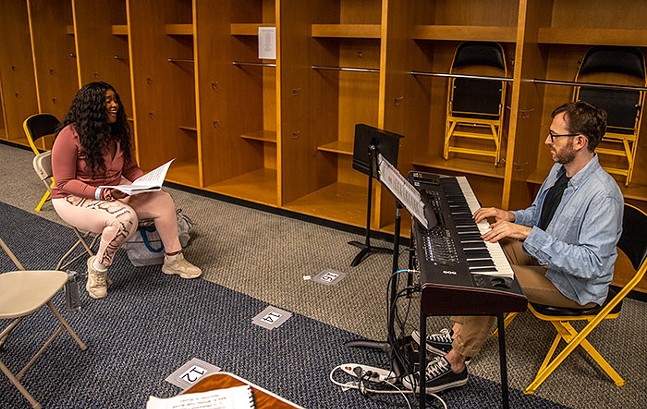 To make the production of each show the best it can be, Fleischer says CLO hired experts from New York who usually work in live concert productions. Lighting designer Andrew Giffin — who previously attended the Pittsburgh CLO and received their Gene Kelly Award in 2014 — has worked on prestigious events, including Justin Bieber’s Believe world tour.

The stage Pittsburgh CLO is using was originally placed at Flagstaff Hill in Oakland with additions of runways on either side of the stage. As for scenery, they’re incorporating a giant digital video wall rather than traditional backdrops. CLO is also installing multiple IMAX screens by the stage where cameras provided by the Steelers will shoot live close-ups of cast members during the performance for those seated farther from the stage. 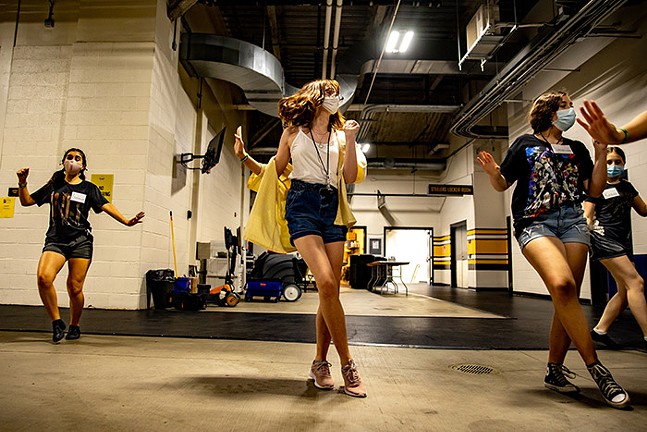 CP Photo: Kaycee Orwig
The Youth Ensemble practices a dance inside Heinz Field.
Fleischer says there will not be any mandatory COVID-related safety measures like mask mandates. However, the tables on the field are spaced about six feet apart. He adds that with the abundance of room Heinz Field offers, guests can choose to sit close to others or far apart in the stadium seats.

The season at Heinz Field also signals a throwback for Pittsburgh CLO, which initially opened in 1946 at Pitt Stadium.

After a devastating year of isolation due to the coronavirus pandemic, Pittsburgh CLO aims to uplift the community once again with musicals, and a return to their roots.

“We went to the Steelers, and they couldn’t have been more gracious,” Fleishcer says. “[The Steelers and Pittsburgh CLO] are both here to try to take care of the community, and I think it’s going to be great.”

When the Pittsburgh CLO announced their indefinite closure in April 2020, the CLO lost 252 performances, and their academy moved to online learning. During this time, the organization launched their “Raise the Curtain Campaign,” which Fleischer says did “really well.” CLO raised enough to keep the theater company afloat and to bring back shows when conditions allowed.

“I have to say, and I'm sure you can talk to any theater or nonprofit in the town, no matter what they serve, this city has stepped up in a way to make sure we're all here on the other side,” says Fleischer. “Pittsburgh has great pride in its institutions.”
Summer Under the Stars, Pittsburgh CLO’s 75th anniversary Broadway celebration. July 8-10, July 21-24. Heinz Field. 100 Art Rooney Ave., North Side. $15-85. pittsburghclo.org