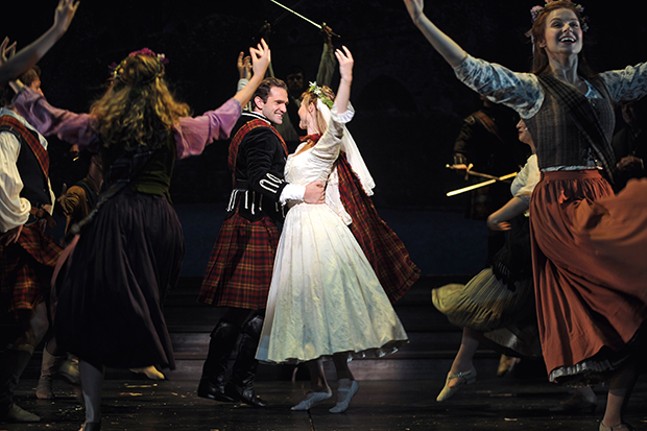 As I watched Pittsburgh CLO’s production of Brigadoon, I was a little startled to realize that in my millennium-spanning career as Pittsburgh’s most beloved tastemaker, I’d only ever seen this Lerner & Loewe musical once before. The reason why is clear.

This is a dance-heavy show and you need an outfit with the resources capable of bringing together this many great dancers; CLO hits the jackpot.

Brigadoon is the name of a Scottish village which emerges from the Highlands mist once every 100 years. The people themselves have only aged a day, but the world has seen a century go by. There’s trouble afoot when two Americans stumble into Brigadoon as it’s rising from the fog. One of them, Tommy, falls for Fiona, a village woman. She loves him back but if she where she to go away with him, the town will be destroyed. And if he stays, he won’t ever be able to leave.

It could be worse. The Brigadoonians could wake up to discover, as the Scottish mist evaporates, they now live on a Trump golf course! There’s also a comedy subplot when the other American, Jeff, falls in with local lassie Meg.

But what there really is, is a hell of a lot of dancing. The original famously featured dances by Agnes de Mille, here expertly recreated by choreographer Mark Esposito in a solid, handsome production directed by Dontee Kiehn.

If you only have one day every 100 years, would you really want to spend half of it dancing in the village square … but then, when you can move as bold and enchantingly as this cast, who would stop you?

It’s impossible to take your eyes off Garen Scribner plie-ing around the stage as Harry Beaton; his sword dance is a highlight. And then Erica Wong shows up and captivates with the exquisitely moving “Funeral Dance.”

Occasionally all this leaping stops for a while giving the cast a chance to sing some of Lerner & Loewe’s gorgeous tunes; here we get a band of solid performers anxious to show off their pipes. Jeff Kready and Eryn LeCroy as Tommy and Fiona and plow through their numbers with power and passion. Natalie Charle Ellis has fun with Meg’s soubrette comedy songs and Jason Babinsky unfurls some remarkable comedic timing as Jeff.

Tim Mackabee’s designed a set we might call “Rural Scots Minimalism” and it works, beautifully lit by Paul Miller.

Brigadoon continues through July 22. Benedum Center for the Performing Arts, Downtown. 412-456-6666 or pittsburghclo.org