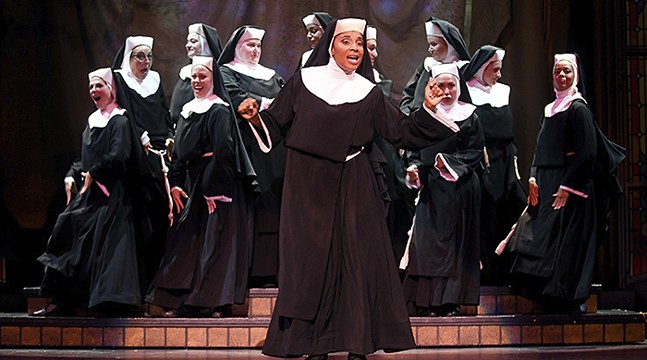 Pittsburgh CLO finishes its summer 2022 season with Sister Act, a rollicking musical adaptation of the hit 1992 film starring Whoopi Goldberg. Playing now through Sun., Aug. 14 at the Benedum Center, the musical — set in ‘70s Philadelphia, as opposed to the film’s setting of ‘90s San Francisco — follows a flashy nightclub singer who goes into Witness Protection as a nun in a stuffy convent, only to discover a higher calling for her showmanship.

Tamyra Gray brings down the house as Deloris van Cartier, a professional singer down on her luck. We meet her on Christmas Eve 1977 as she auditions in an empty nightclub for her mob boss boyfriend and his goons. Even though she and her backup performers, played by Kiara Lee and Saige Smith, give a terrific performance singing one of the show’s best numbers, “Take Me to Heaven,” Curtis, the boyfriend (Benjamin H. Moore), doesn’t seem at all interested in giving Deloris stage time.

The plot takes off when she witnesses Curtis kill a suspected police informant in his posse. Deloris flees to a Philadelphia police station for protection, where she encounters Eddie Souther (E. Clayton Cornelious), a bumbling cop who she knew from high school as “Sweaty Eddie,” an awkward kid who always had a crush on her. As Eddie, who eventually becomes Deloris’ love interest, Cornelious rescues an otherwise flat character with a goofy earnestness.

Eddie convinces Deloris to testify against Curtis and ushers her to a nearby convent that is in no way ready or eager to receive her. The convent, Queen of Angels, features high-strung, mostly-white nuns led by an icy Mother Superior (Anne Tolpegin), and it’s immediately apparent Deloris doesn’t fit at all. Nonetheless, she goes “incognegro” as a nun named Sister Mary Clarence and moves in while she waits for Curtis to go to trial. Mother Superior soon realizes that she can keep Deloris out of her hair by putting her to work doing something she’s good at, singing in the convent’s truly dreadful choir.

In short order, Deloris takes over the choir and coaxes first-rate vocal performances from her fellow sisters, transforming the group into a musical sensation that might save the convent from going broke, if Curtis and his gang don’t find Deloris first. Curtis’ surprisingly funny and likable henchmen, TJ (Tré Frazier), Joey (Davis Wayne), and Pablo (Robert Ariza), comb Philadelphia looking for Deloris, and, once they locate her, shine in a second act number about how they would each go about seducing their way into the convent (“Lady in the Long Black Dress”).

The production’s design frames these performances in a thoughtful and appealing color palette curated by set designer Adam Koch, lighting designer Paul Miller, and costumer Lez Brotherston. Lilacs and blues occasionally come to life with contrasting yellows, greens, oranges, and reds as Deloris navigates Philadelphia’s nightlife, and as the sisters discover and embrace their passion for song. An intricate set by Koch features gorgeous stained glass inside the convent and bleak, but not dull Philadelphia streets outside of it

In the show’s best songs, composer Alan Menken’s music accomplishes the curious task of presenting new songs that sound like they already exist, like the opening number “Take Me to Heaven,” the crowd-pleaser “Raise Your Voice,” and “When I Find My Baby," Curtis’ bouncy Motown love song about how badly he wants to find Deloris so he can kill her. Robbie Roby’s snappy choreography excels in numbers that pull from the history of pop and soul background dancing to make CLO’s Sister Act an unexpectedly glitzy good time. 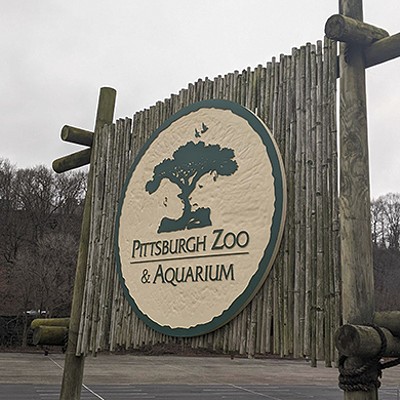