A solid production of the Rodgers & Hammerstein revue suffers from the sameness of the material. 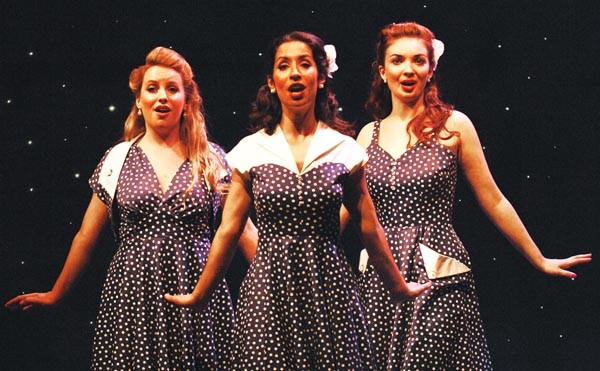 A GRAND NIGHT FOR SINGING

I guess you can't blame Rodgers & Hammerstein for being the most successful creators of musical theater in history. They were just writing what they wrote; it's not their fault a vast majority of Americans clutched them to their bosoms.

So the question that keeps popping up during the Pittsburgh CLO Cabaret's very sturdy production of the R&H revue A Grand Night for Singing is whether the vast majority of Americans are knuckleheads.

Richard Rodgers composed the score, Oscar Hammerstein II wrote the lyrics: Between the two of them, they created such musical-theater landmarks as Oklahoma!, Carousel, The King and I and The Sound of Music.

Hammerstein is considered the best book-writer in the biz — the book being the show's structure, plot and dialogue. As a lyricist, however, Hammerstein was considerably — well, "less skilled" isn't correct, so let's say "less interesting." His lyrics are awash, if not submerged, in a pool of pseudo-pastoralism. The man simply never shuts up about the birds, trees, moon, stars, flowers, clouds, wind and skies.

It's generally held that the music Rodgers wrote with lyricist Lorenz Hart was emphatically more adventurous than what came later with Hammerstein. I don't want to suggest that R&H weren't geniuses ... but any revue featuring more than 30 of their songs has to combat the creeping "sameness" of the material.

Still, A Grand Night for Singing, originally conceived by Walter Bobbie and directed by Jack Allison for the CLO Cabaret, is a thoroughly respectable salute to R&H. If something like this is your dish, chances are you're not going to care about dazzle and difference. You're looking for a soothing and talented evening of comfort — and this production won't disappoint.

Allison's direction is nimble, and as music director and pianist, Brent Alexander displays protean gifts. The young performers never once sound a false note, and each has a chance to shine. There's power in both Paul Jordan Jensen's "This Nearly Was Mine" and Kristiann Menotiades' "Something Wonderful." Likewise Katie Oxman's compelling "The Gentleman Is a Dope," Bre Pursell's plaintive "If I Loved You" and Quinn Patrick Shannon moving "Love Look Away."

But if I'm honest, after a while the sameness does more than creep. As good as Alexander is, a few more instruments could have livened things up and countered the piano-bar feel of the production. And it takes nothing away from these technically polished kids to say that more seasoned performers, ones who'd been around the block several times, might have had some tricks to help animate the soulful (and eventually deadening) earnestness of the material. Michael Montgomery's costumes look quite handsome, but given how monochromatic the numbers are, why stay firmly rooted in a color scheme of blue, black and white?

But that's just me bitching. I've no doubt that if you like this material, you're going to love this show.