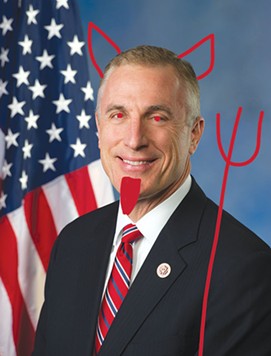 If there were an Olympic event for being an overall horrible person, Tim Murphy would have won gold, silver and bronze in 2017. And that’s why he has been named City Paper’s Worst Pittsburgher of the year.

To qualify for this award, the recipient must be pompous, pious, slimy, smarmy, two-faced and hypocritical. Instead of doing work to spread goodwill and make this a better place to live, the recipient must be selfish and arrogant and only do work to advance their own career or public image. In other words, we were looking for the asshole’s asshole.

We decided in pretty short order that former Republican U.S. Congressman Tim Murphy was our guy.

The 65-year-old — whose district included mostly white, conservative areas like Upper St. Clair, Robinson and parts of Allegheny, Washington, Greene and Westmoreland counties — resigned in October after 14 years in the U.S. House of Representatives. He had been outed by the media about an extramarital affair.

Now ordinarily, I believe that someone screwing up their private life is their own business. But Murphy’s situation was special. When the affair first came to light in September — Murphy’s name came up in the divorce proceedings of his former mistress — the U.S. Navy launched a review because adultery is a crime under the Code of Military Justice, and Murphy is a commander in the Naval Reserves. But that was just the tip of the iceberg.

In October, a text surfaced between Murphy and his then-girlfriend, Shannon Edwards, in which Murphy asked the woman to get an abortion because she was apparently carrying Murphy’s child (the woman turned out not to be pregnant.)

“And you have zero issue posting your pro-life stance all over the place when you had no issue asking me to abort our unborn child just last week when we thought that was one of the options,” Edwards wrote in a text to Murphy.

Murphy then responded: “I get what you say about my March for life messages. I’ve never written them. Staff does them. I read them and winced. I told staff don’t write any more. I will.”

The problem for Murphy is he has been beating the pro-life drum for years, and was lauded by anti-abortion organizations and received campaign funding from them. In fact, on the same day the Pittsburgh Post-Gazette broke the story, Murphy voted in favor of pro-life legislation just as he has dozens of other times over his career.

To be clear, Murphy isn’t winning this very prestigious award because he had an affair. He’s the worst because of his second-to-none level of hypocrisy on matters like abortion. And, if I were a Bible-beater, I’d also ask Murphy if this is the way a God-fearing man would act. After all, those of us on the left are “godless reprobates” simply because we believe in equality for everyone and that a woman has the right to choose what happens to her body.

As if being a two-faced hypocritical jerk wasn’t enough to secure this honor, Murphy went the extra mile by being a mean jerk to his employees. In the days after the abortion news hit, other stories surfaced indicating that Murphy was a horrible boss. The P-G reported on a June memo from Murphy’s chief of staff, Susan Mosychuk, that said Murphy was creating a hostile work environment because of his “inability to communicate without expressions of rage, criticisms or insults.” That behavior, she wrote, resulted in a “near 100 percent turnover in one year’s time.”

So, for engaging in top-shelf hypocritical behavior and being a shithead to the people in his office, Tim Murphy easily walks away with our highly coveted Worst Pittsburgher of the Year award. Ironically, Murphy, a psychologist who spent much of his congressional tenure working on mental-health issues, once wrote a book called: Overcoming Passive-Aggression: How to Stop Hidden Anger From Spoiling Your Relationships, Career, and Happiness. The way he’s acted, it makes you wonder if he’s actually read it.