Five years ago, Leon Ford was shot and paralyzed by police. Today he’s trying to make a difference in Pittsburgh, Silicon Valley and everywhere in between. 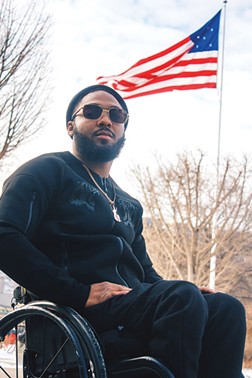 In 2012, Leon Ford was shot and paralyzed by a Pittsburgh police officer during a routine traffic stop. Police say he ran a stop sign and was detained because his name and appearance were similar to those of a man suspected of illegal activities.

Three officers were on the scene at the time Ford was shot. The officers tried to forcibly remove him from his vehicle before one officer, David Derbish, entered the car as it began moving. Derbish then shot Ford five times.

Ford was charged with aggravated assault, but in September 2014 a jury found him not guilty. The following year, District Attorney Stephen Zappala dropped the remaining charges against him.

This year, Ford’s federal civil-rights suit against the officers involved in the shooting finally went to trial.

“I knew we won,” says Ford, who recalls one of the jurors crying during the trial. “It was a complete wipeout. It was clear as day.”

But unfortunately, the result wasn’t what Ford anticipated. In October, officer Andrew Miller, who was accused of assault and battery for attempting to pull Ford out of the car, was cleared by the jury in the civil trial. The jury deadlocked on the charges of excessive force against Derbish.

“I went through a stage of depression,” says Ford, temporarily dropping the customary smile he had worn throughout the trial and other appearances in the years since he was paralyzed. “I was shot, I was paralyzed and I was denied justice. But I believe I have been a great citizen to Pittsburgh.”

Pittsburgh City Paper agrees. This year, the newspaper has selected Ford as its inaugural Pittsburgher of the Year. In the nearly five years since Ford was paralyzed, he has spoken out against police brutality, and he travels around the country to share his story. Locally, he has been an advocate for affordable housing and decried the displacement of residents in East Liberty.

And now he’s transcending the label of victim. Just last week, he was hired by a California-based venture-capital firm. He says he plans to use the position to bring change to Pittsburgh’s East End and to prove he isn’t defined by that one night in 2012.

“Everyone thinks of me as the guy who got shot by police, but I have so many other components,” Ford says. “That’s only one night of my life. It’s been five years of fighting and I’ll be fighting for the rest of my life so it doesn’t happen to anyone else. But that label only defines one moment. It doesn’t define who I am as a person.”

Earlier this month, 24-year-old Leon Ford was basking in the California rays. After the outcome of his trial, he struggled to cope and ultimately went west to collect his thoughts and reenergize himself.

But the trip turned out not to be the vacation he’d planned. While in California, he spoke at Twitter headquarters, where he met the social-media company’s CEO. At a party he attended with his mentor Stephen DeBerry, whom Ford met at a conference in Washington, D.C., he met the owner of the BET network. During the week he was in California, Ford also met people from Facebook, and even had a meeting with professional football player Marshawn Lynch.

“I was just on the ground networking,” Ford says. “It’s rewarding when I get to help connect people and find innovative solutions.”

And the networking paid off. His mentor DeBerry was so impressed with Ford during the trip that shortly after he returned to Pittsburgh, Ford learned he’d been chosen to serve as “entrepreneur in residence” at DeBerry’s venture-capital firm, Bronze Investments.  There he’ll be developing smartphone applications and working on projects to support affordable housing in Pittsburgh’s East End neighborhoods.

“I have a desire to be a part of rebuilding the East Side to make it more inclusive for people who grew up there,” Ford says. “I want to be a property-owner. I want to develop some projects that really benefit and support people from the community.”

Ford’s recent success is a testament to his social capital. He’s spent the past few years traveling the country to speak at schools, nonprofit organizations and prisons.

And in addition to the people he’s touched in person, he’s also gained a following of supporters on social media. In August, Ford — who gets around in a wheelchair — posted a video of himself walking with the assistance of a walker as his 4-year-old son cheered him on. “Keep pushing. Don’t give up,” Ford’s son says. The video has been retweeted more than 150,000 times and viewed more than five million times.

“Although, the doctor’s prognosis has not changed, rehabilitation is going great and I am hopeful that I will one day walk again,” Ford says. “My son is by my side every step of the way.”

But despite all the positive changes, Ford has seen in his life, he says Pittsburgh is stagnant. Asked whether community-police relations have improved since he was shot, Ford says “not at all.”

“If you’re talking to someone with a political motive and who isn’t really connected to the neighborhoods, they’ll say it improved,” Ford says. “But from where I’m sitting, I see good people standing behind bad politics. This absolutely didn’t improve. Some people are scared and afraid to speak up.

In order to address the ever-present problems, Ford says those in leadership positions should be talking to people like him and Jordan Miles, an African-American man who was beaten by three Pittsburgh police officers in 2010.

“People are having conversations about community policing and building relationships, but no one talks to me or Jordan Miles about it,” Ford says. “It’s impossible to have these conversations without him or myself at the table.  A lot of the elitist black folks will meet with the mayor and they won’t bring these issues up. Until we reconcile what happened to me, what happened to Jordan, we can’t say we’re being progressive.”

Last year, the city issued a $125,000 settlement to Miles, a move many saw as a step toward repairing community-police relations. But the city has yet to reach a settlement with Ford. For now, even though he says the battle has been exhausting, he plans to go back to trial in early 2018, with a smile firmly planted on his face, to pursue a civil verdict against the man who paralyzed him.

“I still experience PTSD, I still have dreams. Whenever I see police in Pittsburgh I feel anxiety,” Ford says. “If we don’t hold people accountable, they feel like it’s OK. They’ve taken something from me that I can never get back.”

In January, Ford will release his book, Untold, which tells the story of his experience and proposes solutions to the problem of police brutality. He says that his struggle for justice in the courts is about more than personal gain. He says it’s one more step toward addressing the many issues that adversely impact minority communities.

“I’m definitely hopeful for a verdict in my favor, but I’m even more hopeful for change. Whatever the verdict turns out to be, I know I’m in a position to change Pittsburgh. I feel the city has a desire to be progressive, but we’re not as progressive as people might think,” Ford says. “Personally, I’m hurt. I feel abandoned and bullied. However, I see an opportunity for growth.”