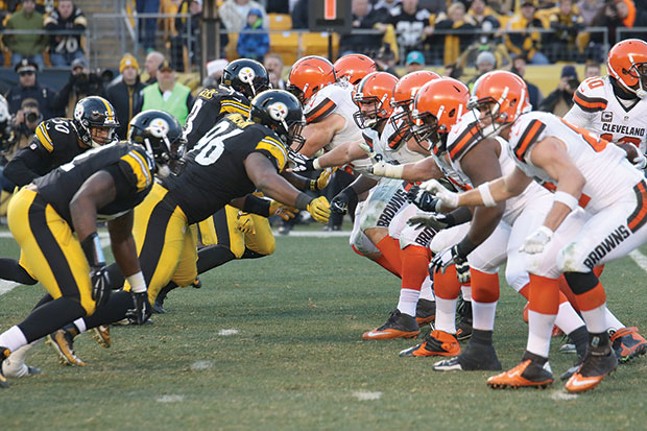 Once again it is time for the never-acclaimed Cheap Seats Bestie and Worstie Awards. This is the third annual installment of an awards show without the distraction of an actual ceremony, trophies, a sponsor or self-respect. All we provide is the acknowledgement that you did very well or very poorly in the past year.

Diaper Dandy of the Year: Eric Williams Jr. The freshman guard for the Duquesne Dukes has already earned a spot in the starting rotation. If E Dub 2, as he has just been nicknamed by me, is any indication of Keith Dambrot’s recruiting skills, Duquesne fans are in for some big celebrations in the future. Williams was born in 1999, started kindergarten in 2004, was old enough to drive in 2015, and has already found a place on an upstart college basketball team.

Worst Use of a Performance-Enhancing Drug: Starling Marte. In the past, athletes like Lance Armstrong, Roger Clemens and Alex Rodriguez actually performed better when using a banned substance. That wasn’t the case for Marte. Statistically, it was a lateral move at best. Marte is cleaning up his act and playing winter ball this offseason to make up for the 80 games he missed in 2017 while suspended.

Best Performance of a Football Unit: The Steelers offensive line. Maurkice Pouncey, David DeCastro and Alejandro Villanueva are all going to the Pro Bowl. The Steelers line alone had more Pro Bowlers than a lot of other teams in the NFL.

Worst Performance by a Home Team: The Pitt Panthers men’s basketball team. In January, the Panthers suffered the indignation of the worst loss ever witnessed at the Oakland Zoo, the Fitzgerald Field House or anywhere else they have played in the past 100 years. Cheating Rick Pitino led Louisville’s team of ill-gotten recruits to a 106-51 win over Pitt.

Best Pirates Offseason Performance: Porch Pirates. Yes, those unsavory thieves who steal packages from people’s doorsteps had a better offseason than the Pittsburgh Pirates. At least they picked up some things of value. Nick Burdi and three Rule Five draft picks is all the Pirates have gotten for Christmas so far.

Upset of the Year: Pitt Panthers football. This award goes to the Panthers almost every year. The 13-9 upset at West Virginia, in 2009, and the win last year over undefeated eventual national champion Clemson were just preludes to this year’s shocker. The Miami Hurricanes came to Heinz Field overconfident in their No. 2 ranking. Freshman Kenny Pickett sent them home with a 24-14 loss and a lesson to never underestimate Pitt football.

Worst Performance by a Sports Organization: Cleveland Browns. Even the Washington Generals have more pride than this team. As of this writing, the Browns are 0-30 the past two seasons, a mark that has never been matched in the history of professional football. At press time, the Browns still had games remaining with the Bears and the Steelers. Even if they make it past the Bears, 1-31 is nothing to build on.

Best Performance by a Sports Organization: Pittsburgh Penguins. The back-to-back Stanley Cup champions put themselves into the record books as the first consecutive hoisters of Lord Stanley’s Cup in almost 20 years. The unfortunately named Nashville Predators put up a little bit of a fight, but once again hundreds of thousands of Pens fans got to celebrate in the streets during the month of June.

Worst Behavior from a Sports Fan Who Lives in Pittsburgh: The idiot Patriots fan from Beechview who caused a ruckus on the T after the recent Steelers/Patriots game. Local news captured a man from Beechview who got into a fight with Steelers fans after the referee-aided victory by New England. He threw a brick at the T and unfortunately the brick — unlike Tom Brady’s footballs — hadn’t been deflated, and wound up injuring an innocent bystander.

Best Sports Prediction: The Cheap Seats. In September, I predicted that the Steelers would go 13-3 on the season. Barring an upset by the Texans, that’s exactly what they are going to do.

Worst Reaction to a Cheap Seats Column: An unnamed reader who sent hate mail via Twitter. Upon reading the prediction, a certain keyboard warrior thought that we had greatly underestimated the Steelers. He responded with: “just read your predictions and guess what, you are a dumb [expletive], no one can predict that [expletive] are you [expletive][expletive]. They are going undefeated. Please quit your job you stupid [expletive].”

So, that means I head into 2018 gloating with a Bestie and the moral victory of proving a moron wrong.