They lie, cheat, steal and win. Yep, that pretty much sums it up.

Every week during the NFL season, power rankings are released. Pointless arguments ensue over whether an 8-4 team is really better than one that’s 9-3. These rankings are fleeting and only a small picture of how a team is performing.

But I’ve always believed that if you’re going to do something pointless, do it right. So now, after days of extensive research, I’m proud to present the Cheap Seats 21st-Century Power Rankings. That’s right, we traveled all the way back to the year 2000, a time when you could *69 a Chi Chi’s for directions to one of its not-yet-to-be-destroyed-by-an-e-coli-outbreak establishments. Or, you could fire up your computer and wait seven minutes through a series of buzzes and pings until CompuServe got you online.

This list isn’t made up of fake news or speculation; these rankings are based solely on numbers. Each team is listed with the number of regular-season wins followed by playoff victories in parentheses. The top team and bottom team are pretty easy to guess, but you will see a few surprises in between.

32. Cleveland Browns: 83 (0). They had the same number of wins going into this season. They’ve had just one playoff appearance this century, and the Steelers had the honor of knocking them out.

31. Detroit Lions: 105 (0). Nobody is more grateful for the Browns than the Lions. Unlike the Browns, they have a decent quarterback in Matt Stafford; like Cleveland, however, they’ve also suffered a winless season.

30. Houston Texans: 110 (3). If the rankings were for dumbest name, they would probably just edge out the Browns. Give them credit though for three playoff wins and the fact that there are two teams with fewer wins, even though the Texans didn’t exist until 2002.

29. Oakland Raiders: 114 (4). Just lose, baby. The once-proud franchise has been deteriorating along with the worst stadium in football. The next stop for this traveling circus will be Las Vegas. 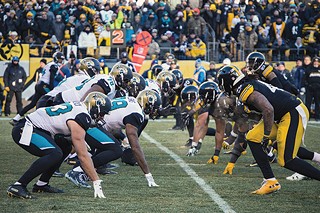 28. Jacksonville Jaguars: 116 (2). The Jags were arguably better in the ’90s when they were just babies. But things are looking up. They almost made it to the Super Bowl a year after going 3-13.

27. Washington: 117 (1). The NFL’s worst owner, combined with the most offensive team name, accounts for the karma this junk organization receives. Just like the other people in Washington, they throw a lot of money at problems to try and fix them. They do have one playoff win, but they’ve spent more than $1 billion to get it.

26. Buffalo Bills: 121 (0). Still no playoff wins, but the future looks mediocre, and they’ll take it. A playoff loss to Jacksonville was the most exciting thing to happen in Buffalo since they lost all those Super Bowls.

24. Tampa Bay Buccaneers: 126 (3). The best one-hit-wonders since Dexy’s Midnight Runners. Their Super Bowl win in 2002 was the last time they won any playoff game.

23. Arizona Cardinals: 129 (5). One of the all-time worst franchises in any sport is turning the corner. They went from 1948 to 1998 without a playoff appearance. “Pittsburgh West” is now churning out respectable teams and even reached the Super Bowl, only to have Santonio Holmes’ touchdown catch in the corner of the end zone squash their impossible dream.

21. San Diego/L.A. Chargers: 136 (4). Good players haven’t been a problem for the team. LaDainian Tomlinson, Drew Brees and Philip Rivers have all put on the uniform. However, putting together good teams has been more of a problem.

20. Cincinnati Bengals: 137 (0). Ohio’s best team is in a four-way tie for most regular-season wins with the next three teams. But, of course, the Bungles are ranked lower because they have zero playoff wins despite winning four conference championships.

19. Miami Dolphins: 137 (1). The fish are just slightly better than the Bengals with that one playoff win. On the plus side, they are the best team in Florida. They never really recovered from Dan Marino’s retirement.

18. Chicago Bears: 137 (3). Da Bears’ only highlight of the new century was Rex Grossman leading them to a Super Bowl loss against the Indy Colts.

17. NY Jets: 137 (6). It’s surprising that the Jets have won that many playoff games, more than 17 other teams. In New York, though, they’re still Garfunkel to the Giants’ Simon.

16. Tennessee Titans: 142 (3). Stuck in the middle despite playing in one of the greatest Super Bowls of all time. The Music City Miracle is their Immaculate Reception. Well, except for all of the success that followed.

15. Kansas City Chiefs: 142 (1). It was another one-and-done for the Chiefs this season. Their only playoff win was against Houston in Texas. Their last home playoff win was orchestrated by Joe Montana in 1993. Great googly-moogly.

14. Carolina Panthers: 145 (8). The Panthers have seven more playoff wins than the Chiefs and two conference titles. Unfortunately for them, they ran into Peyton Manning and Tom Brady when they finally made it to the big game.

13. Minnesota Vikings: 147 (3). They go berserk in the regular season and run out of steam in the playoffs. In fact, it was like they didn’t even show up for the Jan. 21 NFC Championship against Philadelphia. The ghost of that missed Gary Anderson field goal still curses them.

12. Atlanta Falcons: 149 (6). The new Kings of Choke will always be remembered for their Super Bowl collapse last year.

11. New York Giants: 149 (10). When they go to the playoffs, they make the most of it. Every football fan that hates the Patriots so much must give some love for the men in blue. Without the Giants, New England would obnoxiously be bragging about their seven Lombardi trophies, while preparing to go for their eighth.

10. Dallas Cowboys: 150 (2). When they go to the playoffs, they make the least of it. They are in the top 10 in regular-season wins this century, which is surprising. Conversely, they have as many playoff wins as the Jaguars, which is hilarious.

9. New Orleans Saints: 157 (8). Drew Brees doesn’t get enough credit as he climbs and climbs the NFL record book. His Super Bowl win in the ’09 season ensures he will never have to pay for a drink on Bourbon Street as long as he lives.

8. Seattle Seahawks: 161 (13). They’ve scored Super Bowl appearances from both conferences, winning one. This organization has gone from nobodies to somebodies this century. Only three teams have won more playoff games this century.

7. Baltimore Ravens: 166 (15). We hate them, but 15 playoff wins and two Super Bowls this century means we also have to respect them.

6. Denver Broncos: 169 (7). Fewest playoff wins of the top nine teams. But they have a Super Bowl and did use Tim Tebow to knock us out of the playoffs one year.

5. Green Bay Packers: 178 (12). Greenfield’s own Mike McCarthy has a lot to do with the constant success of this proud organization. Going from Brett Favre to Aaron Rodgers helped a little too.

4. Indianapolis Colts: 180 (12). The Manning/Dungy years were very kind to Indy. Lots of playoff games and lots of playoff losses, but they did win it once.

3. Philadelphia Eagles: 182 (11). They are the least successful successful team. They are third in regular-season wins; they have 11 playoff wins, but no rings. They get another shot at it on Feb. 4.

2. Pittsburgh Steelers: 188 (15). Three head coaches in 49 years is still one of the most incredible stats in sports. Your Steelers know how to draft great players almost every single year.