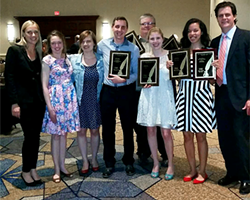 The award, named after Pulitzer Prize-winning Pittsburgh Post-Gazette journalist Ray Sprigle, is awarded to the best daily, non-daily and magazine stories of the year. CP has won the award the past four years, and this year marks Nuttall's second-consecutive Sprigle award. Read the award-winning stories here, here, here and here.

"The stories produced last year by Rebecca and Ryan highlighted one of the most pressing issues facing low- and middle-income residents in our city," says City Paper editor Charlie Deitch. "I'm proud, not only of the work they've done on this topic, but the stories they've continued to produce on this very serious crisis."

Also taking home awards Thursday night: first-time winner Celine Roberts for her coverage of a documentary on the local food scene; Nuttall for her in-depth look at the low number of African-American males receiving the Pittsburgh Promise scholarship; and editor Deitch for a selection of his column, Pittsburgh Left, and the 2015 Pittsburgh Pirates Preview. In addition, Deitch and City Paper intern Jessica Hardin won the award for Health, Science or Environmental reporting for their coverage of Pennsylvania's fight for medical marijuana. Deitch covered the policy side of the issue while Hardin's in-depth feature on a mother's decision to illegally give her child medical cannabis received special mention from the judges.

"I'm extremely proud of all of our winners and finalists as well as the behind-the-scenes editors and designers that enable us to put out a quality print product every week and a quality online product every day," Deitch says.