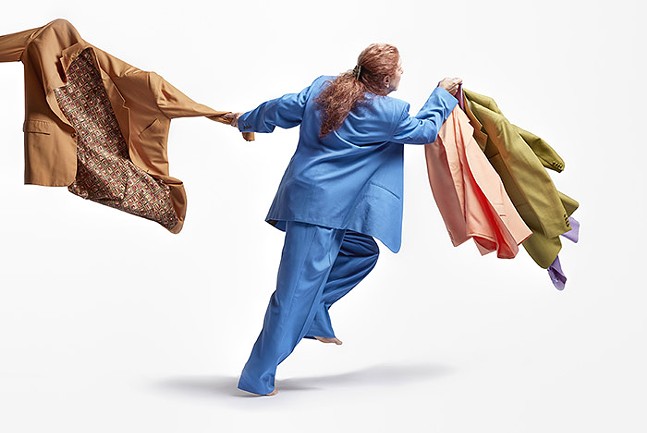 Frank Walsh
Beth Corning in The World As We Know It

DANCE
The World As We Know It
by Lisa Cunningham

Watching Corningworks’ artistic director, choreographer, and dancer Beth Corning perform on stage is like observing an artist paint a picture. She is as breathtaking in creativity as she is in movement. Five nationally and internationally acclaimed female dance soloists join Corning for The World As We Know It, the latest Glue Factory Project series, with original productions showcasing performing artists over the age of 45. All six dancers will perform original solo works taking on the #MeToo movement, woven together with Corning’s choreography. The performance promises a bold take on the proverbial glass ceiling. How bold? A warning comes attached to this performance: “This program contains nudity.” Wed., Oct. 23-Sat., Oct. 27. New Hazlett Theater, 6 Allegheny Square East, North Side. $25-30. corningworks.org

Black coat? Check. White shoes? Got it. Black hat? Right here. Cadillac? I’ll call an Uber. There’s really no wrong way to get to Sandcastle to see Rancid, Pennywise, Suicidal Tendencies, and more power-chord punishers. Just make sure you wear your spiked leather and not your Speedo. 10 a.m., Sept. 14, The Lots at Sandcastle, $39.50–$45. druskyentertainment.com

Musician David Bazan rose to prominence with his indie rock band, Pedro the Lion. The group didn’t necessarily describe themselves as a Christian rock band, but they certainly attracted a lot of Christian fans, due to Bazan’s openness talking about his faith. When the band split in 2006, it was partly due to the fact that Bazan was starting to lose his religion. The documentary Strange Negotiations follows Bazan through this journey as he grapples with what it means for his career, and his life. Director Brandon Vedder and producer Ty Morse (a Pittsburgher) will join audiences for a screening at Regent Square Theater. 8 p.m. Sat., Oct. 5. 1035 S. Braddock Ave., Regent Square. $12. cinema.pfpca.org

MUSIC
GWAR — Use Your Collision Tour
by Alex Gordon

"The crowd literally looks like they're bathed in their own blood, writhing and dying with glee. It was the best thing I had ever seen in my life." That's from a 2015 post on Reddit from a person seeing their first GWAR show, and it might qualify as the best litmus test for whether or not you'd enjoy seeing the band live. GWAR is, as they say, not entirely of this world and probably one of the only bands with a "mythos" tab on their website. But all the myth-making sometimes obscures that they're a badass metal band with killer riffs and fabulous drumming. If you only know about GWAR from the outfits and stories, treat yourself to some writhing and dying of your own when GWAR lands at Mr. Smalls Theatre with Sacred Reich and Against the Grain. 7 p.m. Fri., Sept. 13. 400 Lincoln Ave., Millvale. $25-28. mrsmalls.com

FILM
Plan 9 From Outer Space with Swampwalk
by Amanda Waltz

Bad cinema and live music collide when Spirit celebrates the 60th anniversary of the schlocky, Atomic Age alien invasion film, Plan 9 From Outer Space. Presented by Matthew Buchholz of Alternate Histories, the evening will include a screening of cult movie director Ed Wood’s 1959 sci-fi classic with an all-new score performed live by Pittsburgh musician, Swampwalk. Buchholz says he choose Swampwalk because he thought the “haunting but playful music,” sense of humor, and electronic tones were perfectly suited to Plan 9. New and limited-edition posters will also be for sale at the event. 9 p.m. Tue., Oct. 29. 242 51st St., Lawrenceville. $12 in advance/$15 at the door. alternatehistories.com

It isn’t an exaggeration to call the Pittsburgh Monster Pumpkins Festival “pumpkinsanity.” Some of the season’s largest gourds — weighing up to 2,500 pounds — take center stage at the city’s second monster pumpkin fest. Competitive growers from across the country gather to showcase their fall giants during the weekend-long event. But that’s only one part of the weekend. Watch master carvers etch into gourds, see a 2,000 pound pumpkin smash into a ball pit, and cheer on the brave as they dive headfirst into a pie-eating contest, no hands allowed. This year’s biggest attraction (besides the pumpkins) is the Great Pumpkin Paddle, a rowing regatta of real gourds-turned boats racing down the river. Sat., Oct. 19-Sun., Oct. 20. North Shore Riverwalk, North Side. Free. monsterpumpkin.com

Headlining at the Rex Theater for a special Halloween performance is Buffalo-based quartet Aqueous. If the band’s previous Halloween shows are any indication of this year’s event, the rock and groove powerhouse will have a theme woven into its set that night. During Aqueous’ 2018 performance at the Knitting Factory in Brooklyn, the group went with a Nick Toons theme, incorporating music from the TV channel while dressed as characters from Doug, Rocko’s Modern Life, Ren & Stimpy, and Rugrats. 8 p.m. Thu., Oct. 31. Rex Theater, 1602 E. Carson St., South Side. $16. rextheater.net

100 plays, parties, movies, concerts, and events to spice up your fall