In Pittsburgh, sports of all types make headlines every day. Here’s a quick look at some of the stories we remember most, in random order.

It was fitting that 2017 started off with an old rivalry that hasn’t really been a true rivalry in what seems like forever. On New Year’s Day, Steelers backup players (the team had already made the playoffs) took on a Cleveland Browns squad led by Robert Griffin III and Jeannette High School standout Terrelle Pryor. In a normal situation, any team’s reserves are likely to lose to another team’s first string.  As it turns out, the Steelers came back to tie the Browns before beating them in overtime. It was the end of a season that Cleveland fans and players were glad was over. Cleveland finished 1-15, and the team’s owner, Jimmy Haslam, addressed the media at Heinz Field afterward. Being here in that situation had to be a tough pill to swallow for Haslam, a longtime Steelers fan who was determined to build his franchise in the successful image of the Steelers. On that day, he realized that his team was light years away from even competing with Pittsburgh, let alone overtaking it. (Josh King)

Steelers vs. Patriots I

At halftime of the 2017 AFC Championship game, the New England Patriots held a 17-9 lead over the Steelers. In the third quarter, the Patriots would score 16 points and go on to rout the Steelers 36-17. The scoreboard tally was closer than the actual game. Tom Brady threw three touchdowns to remind the Steelers that he did, in fact, own them. The Patriots went on to win the Super Bowl, and once again Brady’s greatness overshadowed Ben Roethlisberger’s. The sad reality is that if Tom Brady weren’t in the NFL, Ben would have had a chance to be considered the greatest QB of all time. The Patriots got the best of the Steelers in Ben’s rookie season, and got the best of Ben in what then appeared to be perhaps his last. In an interview with 93.7 The Fan in the days following, Roethlisberger wouldn’t commit to playing another down. He said he needed some time to think about his future, and that he wanted to leave the game healthy. Luckily for Steelers fans, Ben would come to camp, but he hinted again that the 2017 season could very well be his last. (JK)

This racetrack in Sarver, Pa., becomes its own little community during the summer. Drivers and fans pack the place weekly to see top-notch dirt-track racing. The track celebrated 50 years of operation in 2017 and is still going strong. (Charlie Deitch)

In January, the Steelers linebacker coach got into a dustup with city police on the South Side. In the aftermath, local and national media reports mentioned every run-in that Porter had had with the law over the years, even those irrelevant to the case at hand. What reports didn’t mention was that the arresting officer, Paul Abel, had a checkered past as well, including an intoxicated, off-duty pistol-whipping of a man Abel mistook for someone else. CP was glad to point out the hypocritical reporting. (CD) 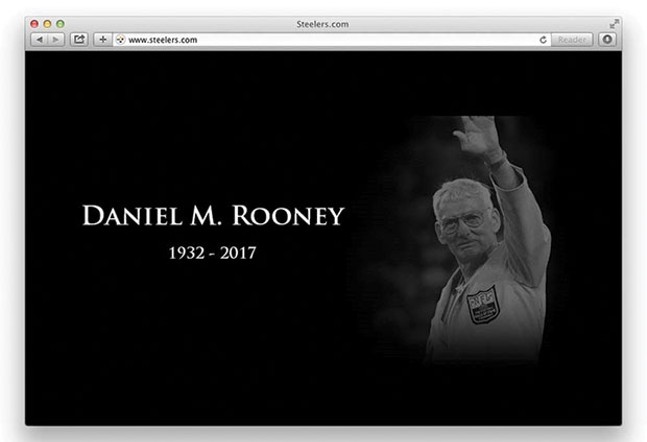 The Steelers online tribute to Dan Rooney after his passing

The death of Dan Rooney

If Pittsburgh ever had a “royal family,” it’s probably the Rooney clan. And in April, it lost the Steelers’ patriarch and former ambassador to Ireland Dan Rooney. The city turned out to mourn in full force at a Heinz Field memorial. He was a great owner and made a difference in the NFL and the city. As President Barack Obama said after Rooney’s death, he was a “championship-caliber good man.” (CD)

The Pirates’ Jung Ho Kang had an incredible 2016 season; then the bottom fell out. In late 2016, in his home country of Korea, Kang crashed the car he was driving and was charged with his third DUI in seven years. This was after Kang was accused of sexual assault in Chicago in early 2016. This past February, Kang pled guilty to the DUI and received an eight-month suspended sentence. Although he wouldn’t serve time, the conviction kept Kang from getting a U.S. work visa, and he missed the entire season. It’s unsure what will happen to Kang in 2018, but his baseball skills may have taken a hit. He was recently released from the Dominican Winter League due to really poor performance. (CD)

As if the loss of Kang weren’t enough, Pirates outfielder Starling Marte was banned for 80 games and the 2017 postseason for using performance-enhancing drugs. So before it truly got started, the Pirates’ season was over. The loss was so detrimental that it triggered negative press for the rest of the season. The Pittsburgh media, who often pull no punches, hit the Pirates harder than ever. It was a frustrating season, and as the calendar turned, fans and media got less and less patient. The club did have a few bright spots, with first baseman Josh Bell emerging as an everyday player. (JK)

By many accounts, Pirates pitcher Jameson Taillon has what it takes to be a legitimate Major League ace over the course of his career. After what he’s gone through, he certainly deserves it. After Tommy John surgery in 2014, and surgery for a hernia in 2015, 2017 was to be his first full season in the majors. However, in late April, he was diagnosed with testicular cancer and underwent surgery. He was back on the mound five weeks later and finished the season. (CD)

In April, The Summer King, an opera about the life of Negro Leagues baseball star Josh Gibson, who grew up and played in Pittsburgh, made its debut here. (CD)

In February, the biggest women’s hockey stars came to town and showed off their talents during the NWHL All-Star Game at the Penguins training facility in Cranberry Township. (CD)

James Conner signs with the Steelers

The toast of the Pitt Panthers in 2016 after returning to the field following cancer treatments, running back Conner was drafted by the Pittsburgh Steelers. During the preseason, his jersey became the best-selling in the NFL. (CD)

In the pro-wrestling heyday of the 1980s, Bill Eadie was a legitimate superstar as one half of the tag team Demolition. In July, he wrestled the final singles match of his career for Pittsburgh’s KSWA during its Brawl Under the Bridge, in Homestead. (CD) 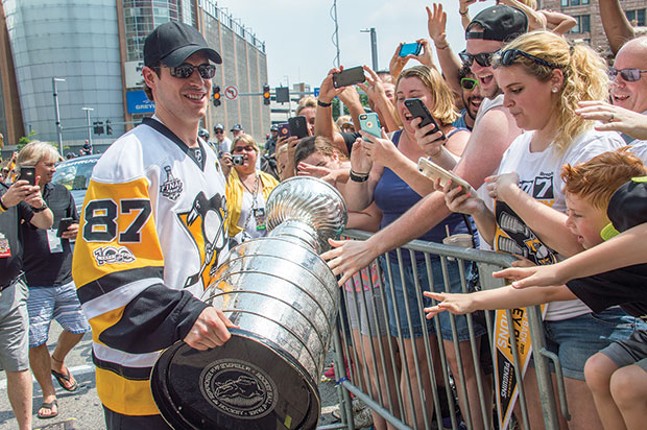 The Penguins became the first team to win back-to-back Stanley Cups in 19 years. While it was a monumental feat, the Penguins expect to win championships every year. The Pens’ journey for a third cup is off to a slow start. But if it happens, it will be a major deal, especially for goalie Matt Murray, who has a real chance at NHL history as he goes for his third cup in his third year in the league. (JK)

During a December game in Cincinnati, Shazier injured his spine when he attempted to tackle the Bengals’ Josh Malone. He was taken off the field and has spent several weeks in the hospital following spinal-stabilization surgery. Shazier began rehab and even attended the Steelers-Patriots game a week later. (CD)

This week-15 NFL matchup was nothing like the AFC Championship game. The Steelers played with confidence and controlled much of the game. Roethlisberger had a great game, and Brady looked rattled at times. The Pats went ahead, 27-24 late in the game and the Steelers appeared to win it in the final seconds, when Big Ben hit Jesse James for a touchdown. However, thanks to the NFL’s asinine catch rule, the Steelers lost. Here’s hoping the Steelers get another shot at Brady in the playoffs. (CD)