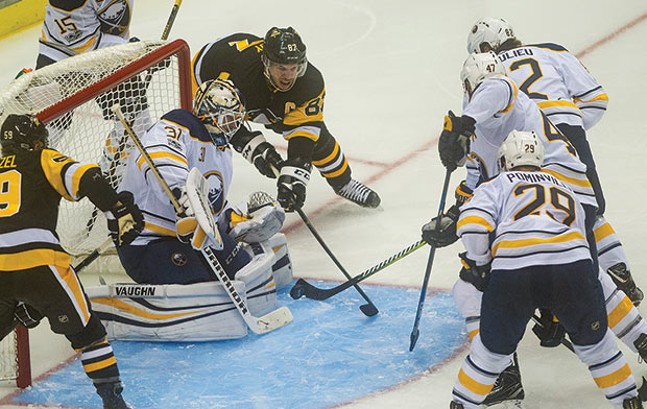 CP photo by Vincent Pugliese
The Buffalo Sabres face the Pens at PPG Paints Arena in 2017.

While some people are excited for this week’s Super Bowl, a lot of us have decided to just turn our attention straight to the ice. All we have to look forward to now is the Pittsburgh Penguins’ quest for a third straight Stanley Cup.

Last week, I unveiled Cheap Seats’ 21st-Century NFL Power Rankings and the Steelers won the silver medal. This week we look at the NHL. The Vegas Golden Knights are not included, but former Pen Marc-Andre Fleury is showing Sin City how it’s done with a 12-4 record and 1.77 goals against average. He could arguably be the best goaltender in the history of two franchises. The formula for the ranking that follows is based on playoff success. Ten points for winning a playoff series and an additional 20 for hoisting Lord Stanley. In the event of a tie, regular-season record determines the higher placement (playoff series wins in parentheses).

30. Atlanta Thrashers/Winnipeg Jets (0). No series wins; heck, no playoff wins. Both incarnations of this terrible franchise made the playoffs once and were promptly swept. They are the Cleveland Browns on ice.

29. Florida Panthers (0). In 1996, they beat the Pens on their way to the finals. It was the last time they’ve won a series. Even Jaromir Jagr bringing his talents to South Beach couldn’t lift this team.

28. Columbus Blue Jackets (0). The Jackets quickly adapted to the Ohio model of pro-sports futility. The six professional teams in the Buckeye state have one trophy since 1990. It was in basketball.

27. New York Islanders (1). Since knocking the Penguins from their quest for three straight Stanleys in 1993, the Islanders have won one playoff series. The curse of 1983 continues. That year the Isles, 76ers, Raiders and Orioles were World Champs. Not one of them ever won again.

26. Arizona Coyotes (2). Wayne Gretzky tried to right this ship, taking over as owner and director of operations. A few years later he gave up, proving that he is not as good an owner as Mario Lemieux.

25. Edmonton Oilers (4). They are the 49ers of the NHL. Both teams were 1980s dynasties, winning four championships. Both added one in the 1990s. Both made it to the finals once this century, and both lost.

24. Toronto Maple Leafs (4). The last time they won a Cup was in 1967. At least the Hockey Hall of Fame is in Toronto, where fans can go to see some good players.

23. Calgary Flames (4). Jagr’s most recent team is a little better than it’s been most of the century, but not much.

22. Minnesota Wild (4). More like Minnesota Mild. If this franchise folded, no one would notice.

21. Buffalo Sabres (5). There really is nothing at all to cheer for in Buffalo, is there?

20. Dallas Stars (5). Another team that had a brief relationship with the great Jagr. At least it’s had more playoff success than the Cowboys.

19. Nashville Predators (6). Six playoff series wins, and three of those were last season. The Pens squashed their dreams last year and proved that Tennessee is the Ohio of the south.

17. St. Louis Blues (7). In each of the Blues’ first three years of existence, they went to the Stanley Cup finals and got swept each time. Well, it’s been 48 years and they haven’t been back. Legendary losers.

16. Vancouver Canucks (7). A steady but unspectacular franchise. They have the indignity of letting the Rangers win the Stanley Cup for the only time in 78 years.

15. Montreal Canadiens (8). Still the gold standard in terms of all-time history, but the luster is fading. They won it all in 1993, the last time a non-U.S. team did so. It’s up to them to Make Canada Great Again.

14. Ottawa Senators (10). Or maybe the Senators will. This century, they’ve been the best team north of the border. A pretty well-run franchise that seems to be contenders every year.

13. Philadelphia Flyers (10). For Pens fans, when Jagr donned a Flyers uniform, it created a mind-exploding blast furnace of hatred that could be matched only if Tom Brady signed with the Ravens. The Flyers are good at losing in the Stanley Cup Finals; they’ve done it six times since 1975.

12. New York Rangers (11). Goalie Henrik Lundqvist is the king of nothing. The Rangers hoisted the Cup the year before Pearl Harbor was bombed and only once since. But the Madison Square Garden faithful loved Jagr when he played there.

11. Colorado Avalanche (8). The Cup win in 2001 moves the Avalanche up the list, but it’s been 10 years since the team won a playoff series. At least its fans can get high.

10. Carolina Hurricanes (9). The Pens swept them on their way to the Cup in ’09 despite Bill Cowher in the stands rooting for the ’Canes. They never recovered and haven’t been to the playoffs since. But they won it all in 2006, before the Curse of the ’Stache doomed them to mediocrity.

9. Boston Bruins (9). Jagr looked wicked awesome when he donned this brand of black and gold. The Bruins’ Cup in 2011 is their only one since 1972. But their obnoxious fans still brag incessantly about it.

8. San Jose Sharks (14). The highest-ranking team to not win it all. Fourteen playoff series wins is still pretty impressive. They got close two years ago, but those Pens are dream-crushers.

7. Tampa Bay Lightning (12). The Bolts ’04 Cup was so shocking that the league had to shut down for the entire next season. Tampa is a very successful expansion franchise that counts Hulk Hogan among its fans. Whatcha gonna do when the Lightning runs wild on you?

6. New Jersey Devils (12). Martin Brodeur won three Cups in his storied career, including one in 2003. The Devils were in the playoffs every year from 1990-2013. They have declined significantly in recent years. But in 2014 their leading scorer was, you guessed it, 42-year-old Jaromir Jagr.

4. Anaheim Ducks (14). What? Yes, they have greatly improved since Emilio Estevez was let go. Fourteen playoff series wins and a Stanley Cup is pretty mighty.

3. Detroit Red Wings (17). The most consistent franchise in all major sports. The Wings missed the playoffs last year for the first time in 27 years. They’ve won two Cups this century and faced the Pens in back-to-back classics in 2008 and 2009.

2. Chicago Blackhawks (16). Entering the 2010 season, the Hawks had not won a championship in almost 50 years. Since then, they’ve collected three Cups, good enough for second place.

1. Pittsburgh Penguins (21) They are the team of the century so far. Jaromir Jagr got his start here, but was just passed on the all-time Pens scoring list by Sid Crosby. The 21st century started out a little shaky, but Crosby, Malkin and the gang have made this franchise the envy of the hockey world. With 21 playoff-series wins and three Cups, nobody is better.

So Pittsburgh has the second-best football team in the country this century and the best hockey team in North America. Remember that and savor it when the 21st century MLB Power Rankings come out in March. As with the upcoming Pirates season, don’t get your hopes too high.