City Paper has writers and reporters all over the city today covering the Donald Trump rally and protests. We will update this blog live as news breaks and reports come in.

10:23 p.m.:
We're wrapping up our live coverage of the rally and protests during Trump's visit to Pittsburgh today. Shortly after a burst of chaos between Trump supporters and protesters outside of the David L. Lawrence Convention Center, a police line formed. The crowd dispersed shortly afterward. We'll have more content and analysis tomorrow. 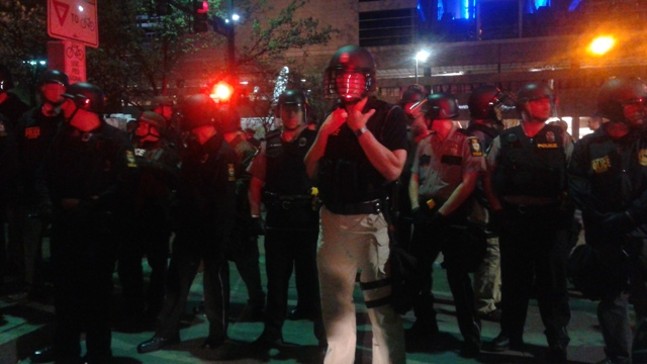 
Dance off between #Trump protesters and supporters happens just before short burst of chaos erupts pic.twitter.com/6SRaka6jpW

(Editor's note: We are unsure why Ashley Murray's Twitter location switched from Pittsburgh to Detroit.)

9:03 p.m.:
Photos from Aaron Warnick of protesters being detained by police


"No Trump, no KKK, no racist USA," chant protesters in Pittsburgh at Trump supporters pic.twitter.com/EZM2lnjpzU


8:41 p.m.:
Trump's speech has been over for some time now, but many supporters and protesters still remain.


One of the protesters outside of the Donald Trump rally in Pittsburgh pic.twitter.com/MKzjj50udr


Competing chants of "Build the wall" and "Fuck your wall" after #Trump rally in Pittsburgh pic.twitter.com/QmaCsgVxfQ


8:32 p.m.:
Video of protesters at rally being detained by police:


Crowd leaving Trump rally is directed away from protesters #TrumpDay


8: 20 p.m.:
Aaron Warnick has returned and reports that in the past 20 to 30 minutes three protesters were taken away by Pittsburgh Police. We'll have videos and photos shortly.


Supporters pumping sign in fist to "Y'all Ready for This?"


8:03 p.m.:
Video of protester being removed from Trump Rally:


Crowd shouting "traitor" at reporters in the media pen after Donald Trump says the media is worse than politicians. #TrumpDay


7:54 p.m.:
Trump is yelling at and engaging a protester inside the rally. Luckily, the "Trump, Trump, Trump!" chant worked as advertised! Also from Ashley Murray:

#Trump tells protester in Pittsburgh crowd that he has "weak voice" and to go "home to mommy."


7:49 p.m.:
From Aaron Warnick outside the convention center:


Trump says 15,500 border patrol people endorsed him last week. Says they have not endorsed a presidential candidate before #TrumpDay #Trump

7:37p.m.:
Protesters and Trump supporters seem to be getting closer.


"How about Joe Paterno? We gonna bring that back? How about that whole thing?" Trump asks crowd in Pittsburgh

7:28 p.m.:
Donald Trump is addressing the convention center crowd, and he's talking about Pittsburgh's woes. He says we're not doing well and that he'll bring steel back. It seems like he's running for president in 1984.


7:15 p.m.:
Aaron Warnick reports that a Trump supporter, upon surveying the line of protesters, called them "walking fucking vermin."

Photo by Aaron Warnick
7:08 p.m.:
Aaron Warnick has sent back this photo of Trump protesters coming face-to-face with Trump supporters with only police officers in between.

6:54 p.m.:
CP's Ashley Murray just called in about a surreal/ slightly creepy announcement that was just broadcast over the public address system at the convention center. A deadpan voice read: "Mr. Trump will continue his lifelong defense of the right of free speech in America. As a matter of fact, he supports the First Amendment as much as he supports the Second Amendment. However, some people have taken advantage of Mr. Trump's hospitality by choosing to disrupt his rallies by using them as an opportunity to promote their own political messages. While they certainly have the right to free speech, we have provided a safe protest area outside of the venue. If a protester starts demonstrating in the area around you, please don't touch or harm the protester. This is a peaceful rally. In order to notify the law enforcement officers of the location of the protester, hold your rally sign over your head and start chanting, 'Trump, Trump, Trump!' Ask the people around you to do likewise until the officer removes the protester."

Photo by Ashley Murray
6:45 p.m.:
From staffer Rebecca Nuttall: There were several African-American vendors selling Trump merchandise. While several said they support Trump, another was adamant that he did not and noted most vendors in his group sell Sanders merchandise too.

"When they see me with the Trump hat and pin on they think I support him," said Errol, 62. "This is like the perfect crime. It's fun. I made $1000 in New York yesterday."

Photo by Rebecca Nuttall
6:37 p.m.:
Photog Aaron Warnick says crowd from Fetterman protest alone is well more than 300. Other groups will meet this protest at the convention center.

5:56 p.m.:
CP's Aaron Warnick says about 200 protesters have gathered with Braddock Mayor John Fetterman at 12th and Smallman streets to begin marching to the convention center. He tells the crowd to be
"peaceful" and "respectful."


Group of protesters at corner of Grant & Liberty Downtown to converge at Donald Trump rally in Pittsburgh #TrumpDay pic.twitter.com/EQ6ke4Qvo0


3 #BernieSanders supporters turned away from town hall, told it was a private event, they even gave away obscene #Trump signs b4 entering


5:15 p.m.:
Photographer Renee Rosensteel says the line of Trump supporters waiting to get into the David L. Lawrence Convention Center is building but quiet. Protesters will be making their way toward the site in the next 30 to 40 minutes.


Trump protesters should "hey ho Donald Trump has got to go" some #Trump supporters yell back, but no fights pic.twitter.com/DYAnKk3DiH


#Trumpday supporters say economy is weak why business leader should be in White House, says Trump says some wrong things, right 95% of time


4:15 p.m.: Sean Miles of Cleveland is in town to sell Trump t-shirts and hats for $20 a pop. He says business is very good and when asked if he supports Trump he said: "Why not try to make a billion dollars like him?"

A school bus just drove by and all the kids shouted "Hillary!!!" at the crowd waiting for #Trumpday @HillaryClinton


3:15 p.m.:  From arts editor Bill O'Driscoll — As if two pro sporting events going off within blocks of one of Pittsburgh’s two Trump-related events tonight isn’t enough of coincidence, here’s a wackier one: The
click to enlarge

At one point, in fact, the two men will be just blocks apart, Trump chatting with Sean Hannity at Soldiers & Sailors Memorial Hall while Fox screens his new film at the Carnegie Lecture Hall. After learning of the coincidence two days ago, Fox publicly challenged fracking enthusiast Trump to a debate on climate.

Don’t hold your breath: As of 2 p.m. today, when CP talked to Fox by phone, the Trump campaign hadn’t taken up the challenge.

But Fox — speaking from the road to Pittsburgh, where he’s been stumping for Bernie Sanders — was happy to talk about how his new film, How to Let Go of The World and Love All the Things Climate Can’t Change, implicitly rebukes Trumpism on multiple levels.

Fox visits as part of a 100-city tour previewing How to Let Go …, which looks at how people around the world are working together to adapt to climate change. (The screening is free; register here.)

“Donald Trump should be ashamed to show his face in Pittsburgh,” said Fox in a press statement. “It’s the first city in the world to ban fracking. Western Pennsylvania is ground zero for contaminition from drilling and fracking.”

Moreover, Fox tells CP that he’s “been thinking about how outrageous it is that [Trump] denies climate change while so many of his properties are coastal developments” in places like Manhattan and Miami Beach — the latter of which is already seeing routine dry-weather flooding at high tide. Fox wonders whether Trump’s leases indemnify him against tenants’ losses: “It’s his buildings that will go under first.” (CNN also addresses this irony here.)

Fox, a native of Northeastern Pennsylvania now based in New York City, says that for fellow New Yorker Trump to not “acknowlewledge the imminent peril to New York due to climate change is incredibly irresponsible.”

But Fox says there’s also something deeper at stake. “The Trump campaign is encouraging the worst value system in us ... greed, violence, racism, intolerance. The [anti-]fracking movement and the climate movement is encouraging the best in us” — things like democracy, unity, caring about fellow humans.

Human-caused emissions of greenhouse gasses have already locked in such serious consequences as rising sea levels and worse storms. To prepare, says Fox, we must “get rid of the extra rounds of shells and get ready the extra seat at the table and the spare bedroom.”

Fox says his new film touts such values. So, he says, does Bernie Sanders, whom Fox introduced last night in Binghampton, N.Y. — where Sanders called for a national fracking ban.

How to Let Go of The World and Love All the Things Climate Can’t Change screens at 7 p.m. tonight, followed by a Q&A with Fox. Donations will be accepted. The Carnegie Lecture Hall is at 4400 Forbes Ave., in Oakland.


3:10 p.m.:
Katie McGinty, a candidate for the United States Senate seat held by Republican Pat Toomey issued a statement a few minutes ago regarding Trump’s Pittsburgh visit. Although it was technically more about Toomey than Trump: “Today in Pittsburgh, Pennsylvanians will get to see a preview firsthand of what the Trump/Toomey ticket looks like. For months now, Donald Trump has delivered offensive and derogatory comments to men and women of all races, ethnicity and religious backgrounds.  All the while, Pat Toomey has remained totally silent, refusing to speak out against Trump’s hate. Instead, Pat Toomey has affirmed that he will support the Republican presidential nominee – even if it is Donald Trump.” One of her opponents in the Democratic primary, John Fetterman is holding a protest of Trump's visit later this afternoon.


3:01 p.m.:
"There's underlying themes [in a lot of places] of trying to decrease diversity," says Ellen Connally from Greenfield. "Pittsburgh is a city of bridges, and I wanted to have a clever play on that theme," she says about her sign. 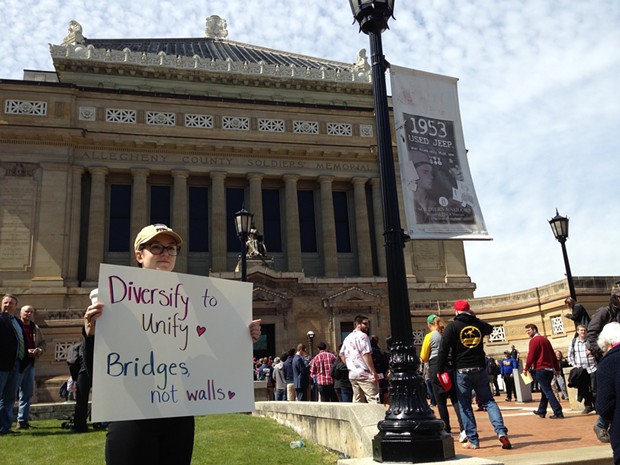 2:30 p.m.: Staffer Ryan Deto is covering the protests going on outside of the Soldiers and Sailors Memorial Hall in Oakland. The online threats of armed Trump supporters that put police on alert last night have so far proved unfounded. Deto said no armed supporters have shown up at Mazeroski Field. Police tell him it is quiet so far. One guy who did show up, however, was this guy wearing a military uniform with a Nazi swastika on his arm and shouting: "Make America Great Again."
click to enlarge