CP Photo: Lucy Chen
Pittsburgh City Council chamber
Over the last several years, high profile fights between Pittsburgh City Council and the mayoral administration have been rare, if nonexistent. A few years ago, when former council president Darlene Harris (D-North Side) was seated, spats were a bit more regular, but they were largely contrarian and, in the last years of Harris’ time on council, mostly consisted of unpopular takes about bike lanes. Harris unsuccessfully ran for mayor in the past and was regularly Pittsburgh Mayor Bill Peduto’s only outspoken critic on the nine-member council.

But that amicable relationship between council and mayor might not last, as some councilors — particularly Ricky Burgess (D-Point Breeze) — have signaled a desire for city council to have more control over aspects of city government that currently belong to a mayoral administration.

In September, Burgess introduced two bills that have raised some eyebrows on Grant Street. The first is a bill that would require additional, and lower level, mayoral staff appointments to receive confirmation from city council before being approved. The second is a push to shift approvals of developments from the Pittsburgh Planning Commission to city councilors, giving them expanded authority to fast track development projects within their districts.

These attempts portend a Pittsburgh City Council that is stronger and more forceful than before, and sources who spoke to Pittsburgh City Paper believe it could just be the beginning of a string of attempts to wrestle more power away from the city’s executive office and into the council.

One person very familiar with Pittsburgh City Council, and who spoke to City Paper on the condition of anonymity, said the timing of these attempts — which come as Peduto is vacating office at the start of next year after losing this year’s primary election tostate Rep. Ed Gainey (D-Lincoln-Leminton) — is suspect. 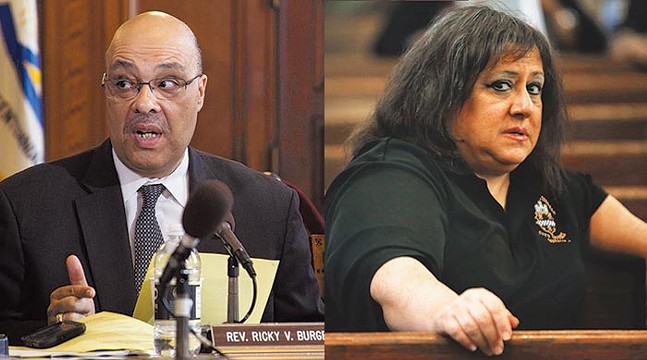 CP Photos: Mike Swartz and Jared Wickerham
Pittsburgh City Councilors Ricky Burgess and Theresa Kail-Smith
“Certainly seeing the zoning bill come at the same time as the bill proposing changes to how the city confirms new directors and deputy directors was kind of telling,” says the source. “I would not be surprised to see more. I think there is a larger intent from some [council] members and that will likely continue to play out.”

Burgess and other council leadership, like Council President Theresa Kail-Smith (D-West End) have spoken to wanting council to have more say in certain aspects of running the city, but they reject any notion these moves are to undermine a new mayoral administration.

In a joint statement issued by Burgess, Kail-Smith, and Councilor Daniel Lavelle (D-Hill District) to City Paper, the councilors acknowledge Pittsburgh is undergoing a transition, and they say they look forward to “working together with and supporting” a new mayoral administration. However, the statement also frames Burgess’ proposals as providing “greater oversight” and says that city council is the branch of local government that is “closest to the people.”

“Although we are preparing for a new Mayor and a new Administration, city council, the city’s legislative branch, is the branch of local government closest to the people. Our charter-given mandate is to be the policymaking body of our government,” reads the joint statement in part. “These bills will go through Council’s deliberative process for consideration, debate, possible amendment, approval and/or denial. As President, President Pro-Tempore and Finance Chair of city council, we strongly believe that today, and for the foreseeable future, city council is committed to a productive relationship with the Mayor and Administration, with each respecting the role of the other. We believe a strong mayor and a strong council will build a stronger City.”

During a Sept. 29 standing committee meeting, councilors Deb Gross (D-Highland Park) and Erika Strassburger (D-Shadyside) had questions and some doubts about Burgess’ zoning change proposal. Gross shared concerns about decreasing the amount of time the community could weigh in on projects, and Strassburger questioned the part of the proposal giving councilors the ability to fast track projects.

During the meeting, Burgess said he was open to amending his proposal, but stood strong on wanting councilors to have increased authority on development projects in their districts.

"I'm not open to the idea that council should not have this authority,” said Burgess on Sept. 29.

The proposed ordinance would amend the city’s zoning code to allow city councilors to identify developments in their district and designate them as a “community concern.” That designation would give such projects an expedited review by the city’s planning department (which operates under the mayoral administration), as well as allowing city council to have more say in these projects. Additionally, the designation shortens the time the Pittsburgh Planning Commission (a body of appointees recommended by the mayor and approved by council) has to approve projects from 90 to 60 days. And if the planning commission didn’t address the proposal within 60 days, the project would be automatically approved.

This is the opposite of the process now, which says if the planning commission doesn’t reach a decision within 90 days, the project is rejected unless the developer is granted an extension. 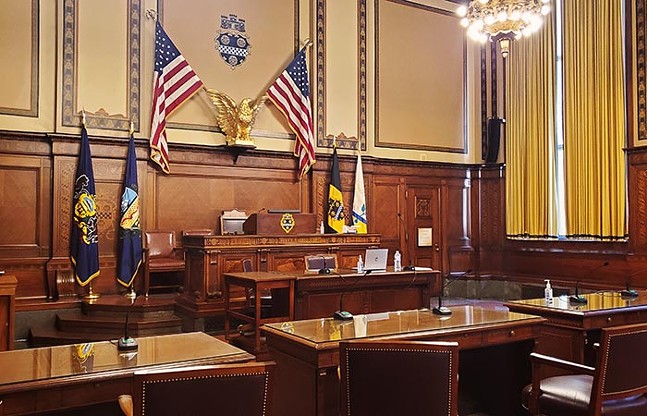 Rick Swartz is the director of the Bloomfield-Garfield Corporation, which helps facilitate development and community outreach in the Pittsburgh neighborhoods. He calls the zoning amendment proposal a “solution in search of a problem” and says it would contradict many recent initiatives to ensure community input is taken into account before projects reach the planning commission or zoning board.

Swartz says this was the reason behind the creation of Registered Community Organizations like BGC in the first place, and it could undermine the entire community process the city has established.

“So if city council were given the power to reverse whatever decision comes out of this lengthy process, for reasons that might be arbitrary at best, neighborhood residents are eventually going to decide the entire system is weighted towards the people with the most power and influence, and refuse to put their time and energy into it,” says Swartz.

Some argue for streamlining or even doing away with the community input process, as community groups have been successful in blocking otherwise popular projects that have support of council in cities across the country, including Pittsburgh. For example, Pittsburgh’s zoning board recently rejected a zoning amendment for a large mixed-use project near the East Liberty busway station that had support from council, the mayor, and transit advocates. The zoning board cited community concerns over potentially increased traffic and blocked views in its rejection.

But Jason Roth, an architect and a constituent of Burgess who is very familiar with the city planning process, says this push shouldn’t be confused with a broader effort to improve land use policies in the city. He says the streamlining only happens when the councilor wants it, and every other project goes through the typical city process. And smaller projects, anything under 8,000 square feet, can’t be fast tracked by councilors. The proposal also does not mention any broad land use goals, like increased density, changing parking minimums, or adding housing near public transit.

Roth says this proposal to allow councilors to designate projects of community concern could give individual councilors more say on development projects than the mayor has. He believes this is a push by Burgess to undermine Gainey, the likely incoming mayor.


“It seems like a desire to redefine their role.”

The source who spoke to CP on condition of anonymity agrees this move looks like an effort to undermine a future Gainey administration. They say it’s well known that Burgess doesn’t have a good relationship with Gainey, and Burgess and other councilors might see an opportunity to avoid any high profile battles before Gainey gets into office.

“It is a redefinition of the body. It is kind of amazing that they have the gumption to do this,” said the city council source. “It seems like a desire to redefine their role.”

During his campaign, Gainey criticized some new development for not being inclusive and campaigned on some zoning change proposals like citywide Inclusionary Zoning, which would require certain, usually large developments, to include a percentage of affordable units.

When reached and asked about Burgess’ proposal, the Gainey campaign said, "Rep. Gainey and his team are monitoring the bills, but he respects council's prerogative to legislate in these areas and is not taking a position at this time."

Any obvious animosity between council and Gainey hasn’t been very evident. Kail-Smith even recently campaigned with Gainey in the West End. Kail-Smith supported Peduto in the primary, but council now is backing Gainey, seemingly to help ensure the likely scenario that a Democrat wins the general election, as there is Republican opposition.

It’s also unclear how current mayor Bill Peduto feels about these moves on proposed zoning changes. Peduto hasn’t weighed in publicly on the proposal, and Peduto’s spokesperson Molly Onufer said, “If it is passed, Mayor Peduto will review the legislation when it is sent to him.”

Overall, however, the proposal is still leaving some uneasy. With the city budget process starting, the source who spoke to CP says the budget will likely have more priority in the city council chambers, which the source says could allow for some of Burgess’ proposals to pass under the radar. The source says that if council wants to redefine itself and pass these bills over the next three months, it might not face too much opposition.

“If these bills were to pass,” the source says, “the mayor would be able to veto them, but I would guess that is not a huge priority right now, since the administration is probably focused on the budget.”