Rogers claims he was let go for his criticisms of President Trump. Since his firing on June 14, 2018, he has moved his cartoon to syndication and continues to publish his popular left-leaning comics on his website.

Rogers was given the award at the National Cartoonists Society's annual ceremony on Sun., May 19 in Huntington Beach, Calif. 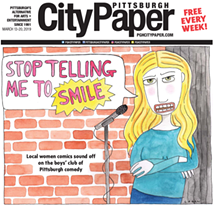 Cover illustration by Teresa Roberts Logan
Another first: The MC for the awards ceremony was Pittsburgh's own stand-up comic Teresa Roberts Logan, the first woman to ever host the event. Pittsburgh artist Wayno, who attended the event, says Logan was "amazing." In addition to comedy, Logan also is the creator of the syndicated comicstrip Laughing Redhead Comics, and she illustrated March 2019's City Paper cover story on the sexism faced by women in Pittsburgh's stand-up comedy scene.

Pittsburgh artist Vince Dorse was also a nominee for the second year in a row for Online Comics-Long Form for his Untold Tales of Bigfoot graphic novel.

The National Cartoonists Society, the world's largest organization of professional cartoonists, honors the year's "outstanding achievements" in the annual ceremony. Props to all the local comics artists making Pittsburgh proud.