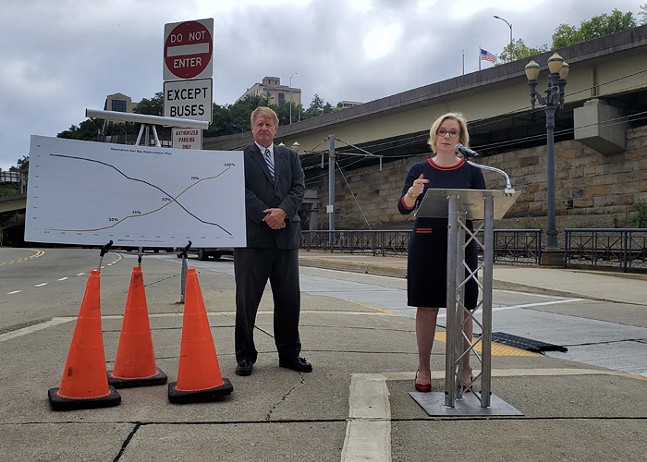 Pittsburgh Regional Transit has committed to transitioning to a zero-emission bus fleet by 2045.

This means, according to PRT officials speaking at a press conference this morning, acquiring gradually larger increments of electric and alternative-fueled buses every year as older vehicles age out of the system.

“We run our buses for 12 years, so every vehicle that we're retiring out, we will keep for 12 years,” said PRT CEO Katharine Kelleman. “Those diesel buses, they're going to be here for 12 years, and when we replace them, we are committing to completely clean vehicles when we bring them in.”

Kelleman said the company will continue to buy a portion of new diesel buses until it has the appropriate infrastructure at each of its four garages to charge and maintain higher numbers of electric vehicles. She said she suspects the lion’s share of its future fleet will be electric-powered, but transit leaders are also considering hydrogen and other alternative fuels.

Currently, six of PRT’s 700-plus fleet are electric powered and 15 more are on order, officials say.

Kelleman was joined by a range of local stakeholders, including Allegheny County Executive Rich Fitzgerald and representatives from the U.S. Department of Energy, Duquesne Light, Sustainable Pittsburgh, and others.

Fitzgerald stressed its potential health benefits to communities where air quality is currently tarnished by vehicle emissions and industrial pollution.

He said they want to move their vehicles "towards electrification, hydrogen, and other alternative forms of energy to move us around and get our folks to work, get them where they have to go, get them to school, and get them traveling to the places to improve their lives,” with an addendum that he also wants "to make sure that, in these neighborhoods, that the air quality and the environment is going to be improved for people who live on and near our transit line.”

“Sustainability is built on our relationships to each other and to the world around us. And that's what's so exciting about today's announcement,” said Joylette Portlock, executive director of Sustainable Pittsburgh. “With this plan for creating a zero-emission fleet, PRT is taking steps that advance several regional sustainability goals at once.”

Some of these goals include, according to Portlock, strengthening communities and their economies through improved transit, while also elevating public health and the environment.

Brian Guzek, vice president for corporate strategy at Duquesne Light, said his company is partnering with PRT to help it meet the infrastructure needs of a largely electric fleet.

“We're investing in those charging infrastructures in that partnership to make sure that we're there in the moments that matter for our region and for our partners,” Guzek said. “As the PRT continues the evolution that we're seeing here, Duquesne light is ready.”

Kelleman said new electric buses cost around $1 million — compared to diesel vehicles which are priced at around $800,0000 — but notes much of that higher up-front cost will be recouped over time through reduced fuel and maintenance expenses.

“The cost is higher on capital, but it's lower on operating,” Kelleman said.

Kelleman and Fitzgerald said federal funding will play a big role in funding the vehicle upgrades.

Officials unveiling the plan acknowledged the 23-year commitment relies, to some extent, on successive leaders honoring their pledge, but said they remain optimistic nonetheless.

“There's no guarantee that the next county executive, the next governor, the next administration or team in Washington is going to do that,” Fitzgerald said. “But we're going to put plans in place that we think are best practices, and hopefully they'll follow through in future generations.”