“We are more than just Pride weekend. When it comes to LGBTQ community, we battle all these things every day.” 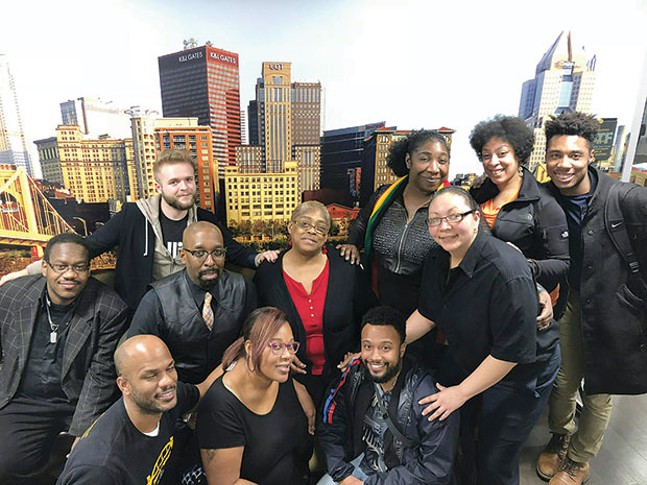 “We have vision,” says Black Pride spokesperson Cheneal Relazez Hilton. “We are leaving other things outside the door, and we aren’t speaking about other Prides, unless we are partnering with them.”

In 2015, controversy surrounded the Pittsburgh Pride Festival and a rift formed within the LGBTQ community. The area’s largest LGBTQ organization, the Delta Foundation, organizes Pride, and that year, some people took offense to Delta’s choice of rapper Iggy Azalea as headliner for its concert event. (In the past, Azalea had made comments about the LGBTQ community that many found offensive.)

Some people protested Pittsburgh Pride and formed their own group, Roots Pride, to emphasize the need for more queer and trans people of color in Pride events. But Pittsburgh Black Pride felt those grassroots groups were ignoring the work Black Pride had done in the minority LGBTQ community for more than 20 years.

Now, Black Pride organizers are hoping to put those disagreements behind them. This year, the group intends to focus on a theme of “rebirth.”

While Felicia Harvey is still heading Black Pride, now in its 23rd year of service, Hilton says the group has formed a board for the first time and is working toward acquiring nonprofit status. Black Pride has created a media team, finance and administrative groups, and a youth committee. Members have been in contact with other Pride organizations across the country, and some members are attending leadership conferences to help generate ideas.

Hilton says Black Pride is evolving from a group of passionate volunteers to a more legitimate organization that will “stay on mission.” Hilton says Black Pride will host events throughout the year to help people find jobs; raise awareness for LGBTQ health concerns; and put on social gatherings for queer black men, LGBTQ allies and the LGBTQ community as a whole.

“Change was inevitable,” says Hilton. “We are more than just Pride weekend. When it comes to LGBTQ community, we battle all these things every day.”

Hilton says the group will continue its partnership with local health-care companies Highmark, Allegheny Health and UPMC this year, and are looking for more sponsors. Hilton adds that Black Pride is in a “positive place” with the Delta Foundation.

The reorganization of Black Pride also includes a new logo, featuring a circle of rainbow-colored clenched fists around the word “pride.” Hilton says T-shirts with this logo are for sale on Black Pride’s website, and she is hoping the shirts remind people of the new and improved Black Pride.

Pittsburgh Black Pride is also altering the schedule for its July celebration. Previously, events ran over the course of a week, but now all events will happen during a long weekend. An opening ceremony kicks off the events on July 26, and a community barbecue closes out Black Pride on July 29, at Schenley Park in Oakland.

More information about Pittsburgh Black Pride can be found at www.pghbp.com.