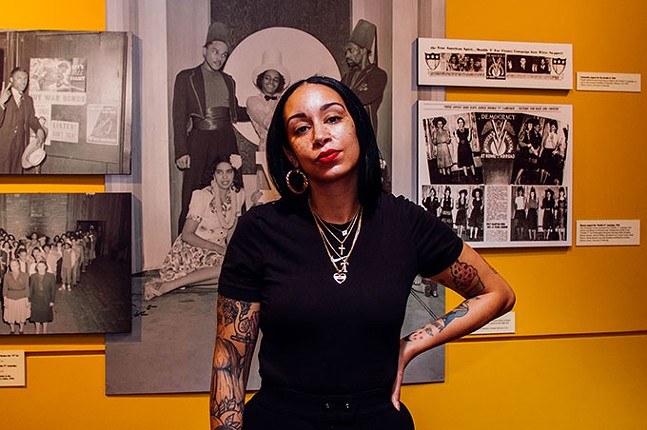 When Bloomfield artist Tara Fay Coleman was notified that she won an award from a local publication last year, a mix of emotions followed. She knew it was a big deal; it substantiated her hard work, and she felt validated. Which made it all the harder for her to turn down the award.

Coleman, who is Black, says that you often will see Black people and their accomplishments celebrated in media organizations’ yearly award ceremonies, but not in their day-to-day coverage.

“I thanked them and told them, 'I would love to accept this, but unfortunately I don’t see myself or my work reflected in any of your content,'” says Coleman. “Once a year, you want to throw a few Black people a bone,” she adds. “I feel like it does more for them than it does for us.”

An arts curator who works part-time in a local Black-owned fashion boutique in addition to her office job at a local tech company, Coleman said she’s tried to get local media organizations over the years to publish more stories on Black artists and fashion designers she was representing, with little success.

After continuously getting turned down for coverage, Coleman says she started to become “outspoken about how these publications look, in terms of what they’re featuring, [and] what their staff looks like, compared to what they’re actually covering.”

What she does see from local media organizations when covering the city’s Black communities instead are largely stories on crime. She’s not alone.

“The Pittsburgh problem: race, media, and everyday life in the Steel City,” a 2019 news report published by Letrell Crittenden, program director and assistant professor of communication at Philadelphia’s Thomas Jefferson University, confirmed many of Coleman’s suspicions in his executive summary: “Pittsburgh news media over-represents African Americans as criminal," Crittenden wrote in the report.

It noted two studies in 2011 commissioned by The Heinz Endowments that found that men of color in Pittsburgh were shown as criminals or athletes more than 80% of the time in print; in broadcast news stories, 90% of the time.

There are some Black media outlets in Pittsburgh, including print publications The New Pittsburgh Courier and Soul Pitt, and radio station WAMO, along with national online publications coming out of Pittsburgh like Damon Young’s Very Smart Brothas and Jenesis Magazine, edited by J. Thomas Agnew. But the media landscape at large in Pittsburgh — which, for full disclosure, includes Pittsburgh City Paper — is still predominantly white.

“I think a lot of the responsibility lies on white-led media,” Coleman says. “You’re choosing this content, and your content is reflective of the publication you aim to be.”

It was when Coleman first moved to Pittsburgh in high school that she says she experienced racism for the first time. After growing up in a predominantly Black neighborhood in Buffalo, N.Y., she says it was a culture shock to go to Shaler, a mostly white school, and realize how segregated Pittsburgh was in the early aughts.

For her senior project, she facilitated “Diversity Day,” an all-day educational event that included a visiting group from the University of Pittsburgh helping students with anti-racism exercises. She says she worked with her school principal to mandate that anyone who had been reported for any racially-motivated fight in the school attend Diversity Day or face in-school suspension.

“People were calling it ‘Hug a N—r’ day,” Coleman says, adding that while her principal and vice-principal were very supportive, some teachers were consoling kids who were upset they had to attend. “I pulled [the event] off, and it was great,” she says. “But backlash was crazy.”

Now a mother to two daughters of her own, both who attend public school, Coleman acknowledges she has even more of a reason to advocate for change. Especially because she thinks it may have gotten worse in some ways since she graduated high school in 2006.

“Pittsburgh: A ‘Most Livable’ City, but Not for Black Women,” a September 2019 CityLab article by Pittsburgh journalist Brentin Mock, detailed last year’s widely-shared report on “Pittsburgh’s Inequality Across Gender and Race.”

“Black people in just about every other comparable city in the U.S. are doing far better in terms of health, income, employment, and educational outcomes than Black people living in Pittsburgh,” wrote Mock of the report.

According to PublicSource, the report showed that “Pittsburgh’s rate of infant mortality for Black babies is more than six times higher than it is for white babies. The report also found a significant wage gap among adults. Black and other non-white women earn between 54 and 59 cents for every dollar a white man in Pittsburgh makes.”

“I want to see more accountability in how we frame Pittsburgh as ‘the most livable city’ when that’s not everyone’s reality,” Coleman says.

“If the media was less biased,” Coleman says, “it could put more pressure on local politicians and hold more people accountable.” 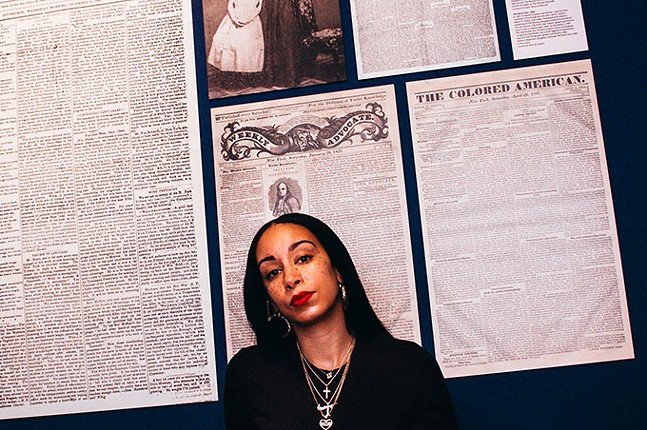 Coleman hopes to bring attention to these issues during a Pittsburgh Black Media Panel at the August Wilson African American Cultural Center on Wed., Feb. 12, where a panel of eight local Black media personalities will speak on their shared experiences on working in the Pittsburgh mediascape.

Her goal of the event — hosted by both City Paper and local nonprofit news organization PublicSource, with additional support from the Pittsburgh Black Media Federation and California University of Pennsylvania — is for it to be a learning experience to help all local media organizations become more intentional in their reporting and hiring practices and to reevaluate the culture of their publications: who they’re trying to reach and what they’re trying to accomplish.

“My experience isn’t really unique, and there’s a lot of people who have similar experiences and similar feelings of being misrepresented, and those people don’t have the ability to put something like this together,” Coleman says. “So those are the people I’m advocating for.”

Coleman says it was important that the panelists were not just all Black, but that they had a balance “in terms of Black femme representation and a good mix of legacy media people and alternative media.”

The panel will be broken into two parts, moderated by Coleman and PublicSource community correspondent Jourdan Hicks. CP writer Jordan Snowden is gathering social media feedback using #PGHBlackMediaPanel on Twitter and Instagram to present during the event, and a testimonial booth will be set up during the panel to allow the public to record a message for local media organizations.

“I want Black people to read things about us in our communities that can make us proud,” Coleman says. “I want someone’s grandma in Larimer to read positive things instead of hearing about crime in her community or her being outpriced and gentrification moving further east.”