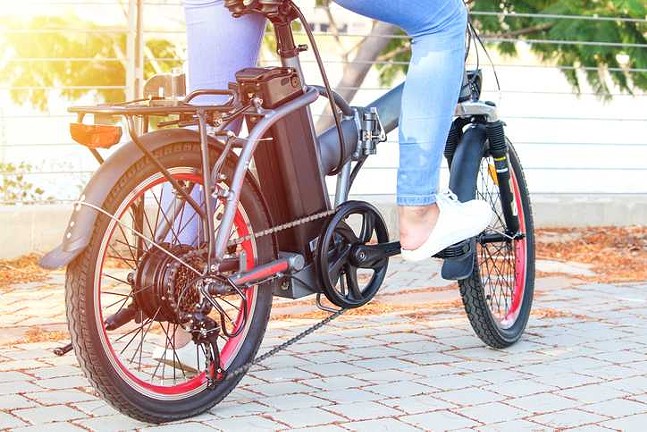 Example of an electric-assist bike
Riding up Pittsburgh's hills is a huge deterrent to cycling in the city, but Pittsburgh's bike-share system is hoping to make that easier.

According to WESA, Healthy Ride, aka Pittsburgh Bike Share, will add five electric-assist bicycles to its fleet of hundreds of bikes sometime this summer.

Electric-assist bikes, or e-bikes, act the same as regular pedal-powered bikes, except riders gets a boost from a small electric engine to help them power up hills or ride faster in traffic, when bike lanes aren't available. E-bikes can travel up to 20 mph, without too much exertion from the rider, but still require some pedaling.

E-bikes have been booming in popularity. According to market researchers at The NBD Group, e-bike sales have increased 450 percent since 2013. And other bike-share outfits are getting in on the action too. In February, Citi Bike in New York City announced adding 4,000 e-bikes to its fleet, up from 200.

According to ride-hail company Lyft, who manages e-bikes for Citi Bike, the electric-assist bikes are three times as popular as regular bike-share bikes.

Electric-assist bikes are also a good option for people looking to ditch their car. According to Christopher Cherry, a transportation researcher at the University of Tennessee-Knoxville, e-bikes are 10 to 20 times more energy-efficient than a car. Pittsburgh's Department of Mobility and Infrastructure director Karina Ricks lauded the use of e-bikes on Bike to Work Day earlier this year.


First commute on my new e-bike - I’m in love!! ⁦@sbrix⁩ For Lena pic.twitter.com/zd6HCy6Fsl

White from Healthy Ride said e-bikes were just another piece in the puzzle to making Pittsburgh a more connected city for non-drivers. He said he hopes e-bikes will increase people's connections to public transit and other non-car mobility options.