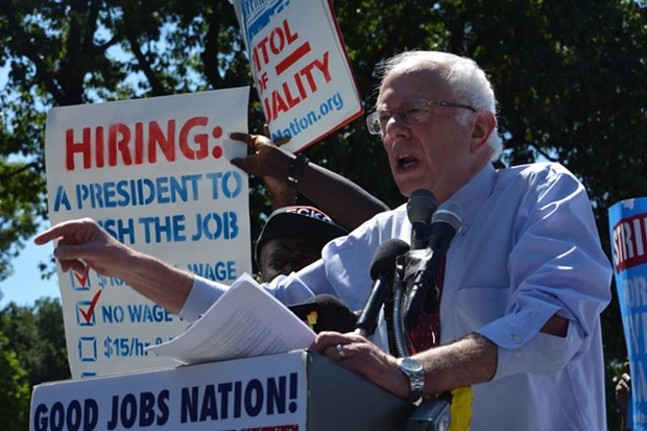 Photo: sanders.senate.gov
Sen. Bernie Sanders at a rally for $15 minimum wage
On Monday, presidential candidate Bernie Sanders visited Pittsburgh and picked up his first endorsement from a national labor union.

After a speech at the United Electrical workers union headquarters, the union endorsed the independent Vermont U.S. senator. UE General President Peter Knowlton said in a statement that Sanders' longtime advocacy for UE workers in his home state and his recent support of the striking workers at a Wabtec facility in Erie “made it clear which side he is on.” Sanders also recently used his email list to rally for UE workers who were picketing outside of Wabtec headquarters in Wilmerding.

“Bernie understands the need for workers to have a democratic, independent union movement that is unafraid to challenge Corporate America's stranglehold on our economy,” said Knowlton in a statement.

The UE resolution also notes Sanders' support for Medicare for All, single-payer health-care proposal. UE has also been a vocal supporter of the Green New Deal, sweeping proposal to move the U.S. off of reliance on fossil fuels by providing jobs building wind and solar energy plants, as well as upgrading the country's infrastructure and electrical grid. Sanders has also backed the Green New Deal.


“What the UE is about, what our campaign about, is saying that in the wealthiest country in the history of the world we can have a nation where all of our people live with security and dignity.” @BernieSanders at #ue76th Convention pic.twitter.com/iP2bkiOgxR

Sanders was also endorsed by UE in 2016, which is one of the more left-leaning labor unions in the country. At the convention, Sanders said he was “humbled to receive the endorsement of my union brothers and sisters from UE.” In his speech, Sanders criticized Wabtec for seeking mandatory overtime and other concessions from workers, according to WESA.

“UE’s successful strike in Erie has sent a message to corporate CEOs across the country that it is absolutely unacceptable for profitable corporations to provide obscene compensation packages to executives while ripping off workers and their families,” said Sanders in his speech. “Our fight is about the need for an economy that works for all Americans and not just the 1 percent, and we are going to win that fight together.”

Sanders' UE announcement wasn’t the first time he has rallied with workers in Pittsburgh. In April, he spoke in front of thousands at Schenley Plaza in Oakland, including lending vocal support for UPMC hospital workers' efforts to form a union.