She makes cakes, breads, gluten-free loaves and a “soul-food cupcake” with a fried-chicken topping

The last place I expected to get good food was in a conference room at the University of Pittsburgh, where I was part of a panel on the use of the word “they” as a gender-neutral singular pronoun.

But a fellow panelist, Dena Stanley, a trans woman and LGBT activist, brought along a box of delicious cupcakes. It turned out that Stanley, a pastry chef at the university, also runs a home-based bakery business called MadDezSweetz. 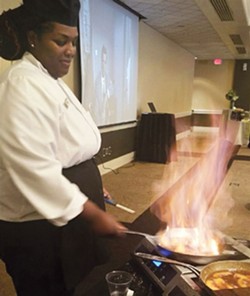 The well-received cupcakes offered interpretations on classic flavors. But one had fried chicken on top! Stanley explained that that was her “soul-food cupcake.” It’s a cornbread cupcake, with a sweet-potato topping, mac-and-cheese inside and fried chicken on the top. It seems like a strange cupcake, but the combinations are fantastic — and if arranged on a plate, say, it’s just as “classic” a flavor set-up as strawberries and cream or Black Forest chocolate with coconut icing.

“I get ideas, and then I just try to work it out and enhance it,” Stanley says.

Stanley grew up in Pittsburgh and became interested in baking through her grandmother. “She made these pound cakes that were so good, it drew me in,” she says. Stanley moved to Georgia after graduating from the Pittsburgh Culinary Institute. She worked for a French chef at a local hotel and for a large bakery chain. (She was also transitioning at the time, which led to discrimination and a lawsuit against the bakery, which was later settled out of court.)

Stanley’s dream was to run her own business, and she decided that Pittsburgh was where she wanted to do it. Stanley doesn’t just make cupcakes; she also makes cakes, pastries and specializes in bread.

And while she can bake the old-fashioned way, she also produces breads that are vegan, gluten-free and suitable for those with food sensitivities. “A lot of gluten-free breads, I would wonder, ‘Who’s going to eat that?’” Stanley says. “It’s very difficult to make it well. There are so many different components, and you have to really have everything right down to the fraction to make it really delicious.”

In time, Stanley hopes to have a retail store, but for now her baked goods are available by contacting her directly (412-618-6564 or maddezsweetz@gmail.com). You can also find her work by searching Facebook for “Maddezsweetz.”