“New voices and fresh ideas are incredibly important to the progression and vitality of our art form.” 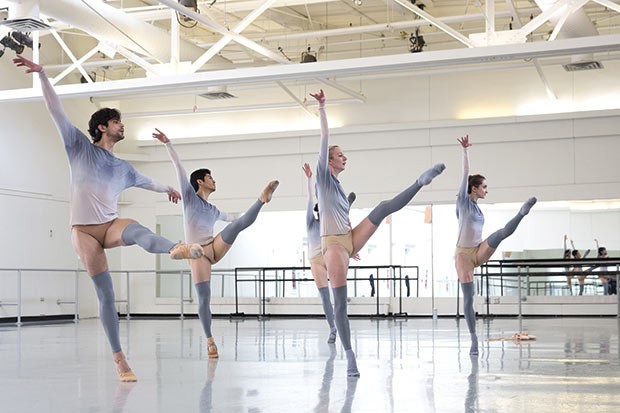 While there have been many notable examples of dancers launching their choreographic careers while still members of ballet companies — Justin Peck and Christopher Wheeldon, at New York City Ballet; Crystal Pite, at Ballett Frankfurt; and Matthew Neenan, at Pennsylvania Ballet to name a few — putting the works of essentially novice choreographers on stage as part of a mainstage production can be a risky endeavor for a professional ballet company.

A milestone for the company, the New Works program is the culmination of several past trial balloons floated by artistic director Terrence Orr, designed to inspire dancer-choreographed works from within the company’s ranks. Most recently, Nakano choreographed the neoclassical ballet “A Fellow Feeling,” for PBT’s March 2016 program at the Byham Theater, and Nakano, Erickson, Moore and Verona also created works for PBT productions at Seton Hill University and Hartwood Acres.

“New voices and fresh ideas are incredibly important to the progression and vitality of our art form,” says Orr. “I see the talent within our own ranks and think it deserves a platform. It’s important to the creative energy of our company — both from the perspective of the choreographers and the dancers being choreographed on — to create these kinds of opportunities.

“For our audiences, it’s a chance to experience ballet through fresh eyes, to see new ideas, and to connect, in this different way, with our dancers. In the process, we want to add to the voices in our field, supporting and encouraging emerging talents with important things to say.”

That encouragement has even extended to PBT’s costume shop, where four emerging costume designers were commissioned to create the looks for four of the choreographers’ ballets.

Divided into two separate mixed-repertory programs — Program I is scheduled for March 16, 18 and 24, and Program II for March 17, 23 and 25 — area audiences will have seven opportunities to see the works of these young artists over New Works’ two-week run.

Program I will feature four premieres, including Cochrane’s latest “Interlaced Motifs.” Set to music by Claude Debussy, Cochrane says her 23-minute multimedia ballet in six movements was inspired by impressionist paintings of Monet, Van Gogh and Whistler. This gave the Spokane, Wash.-native the idea of turning the stage into an impressionist painting, she says.

“Each different piece of [Debussy’s] music will have a painting to go with it. The choreography, inspired by each painting, has a spiraling movement quality that I envisioned as paint strokes,” Cochrane says.

The ballet will also feature costumes that have been dyed to mimic an impressionist painting. “I’m hoping to create the illusion that the dancers are a part of each painting,” says Cochrane.

The most well-received of PBT’s young choreographers has been Nakano, whose new ballet “Infusion” will test his and the ballet’s dancers’ ability to switch stylistic gears within his 19-minute ballet. The Osaka, Japan-native says the ballet’s four sections will utilize four different types of music and, correspondingly, four differing movement languages.

Hailing from Eustis, Fla., Schmidt’s “Lightworks” will be her first commissioned work for PBT. The 20-minute contemporary dance work set to an eclectic mix of music by various composers, Schmidt says, was “motivated to depict ways that relationships can go terribly wrong, but with a touch of humor.” Schmidt describes the movement for the ballet as “weird, sometimes groovy, and sometimes intentionally unattractive.”

Rounding out Program I will be Ipswich, England-native Moore’s third ballet for PBT, “Weighted Affair.” The 24-minute neoclassical ballet danced to music by Mozart, Beethoven and others is set during a dinner party and tells two stories, says Moore.

“One of which is five friends attending the party, while the other is the simultaneous story of all five’s differing thoughts and emotions during the party,” he says.

Program II will feature three new ballets, including retiring company star Erickson’s “i.” In describing her contemporary dance work, the Seattle native says, “The initial kernel for the piece came from the evocative, spare poems of Nayyirah Waheed. They expose a rawness and vulnerability that we can all ultimately relate to, if we let ourselves go there.”

For her first choreographic effort for PBT, McCann’s 20-minute contemporary ballet “the silver line” examines life choices. “My ballet is about how the choices you make create who you are, and how no matter how much you try to find the good, or how much you keep thinking about the bad … there’s always a middle ground people tend to overlook,” says the Los Angeles native. Danced to music by Maya Beiser, Ryuichi Sakamoto and Anna Meredith, the ballet will have its female dancers covered in chalk powder and sporting transparent, oval-shaped tutus.

Closing out Program II’s offerings will be Lebanon, Conn.-native Cooper Verona’s “Thick White Sheets.” Having been commissioned by PBT, its school and Point Park University, Verona may be the most experienced of the young choreographers presenting works. His ballet for eight dancers is set to music by Colin Stetson and others, and “sheds light on the role of circumstance in people’s lives.”