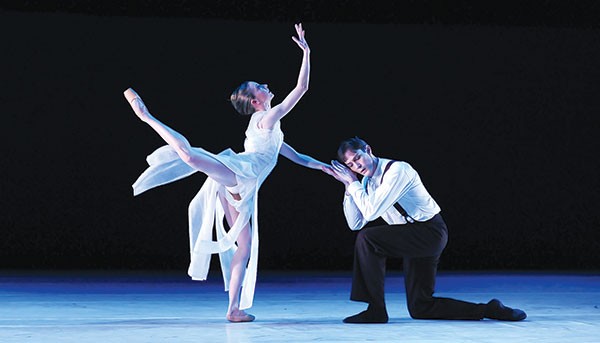 A world premiere, a company premiere and an old favorite combined to make Pittsburgh Ballet Theatre's 3 X 3 program at the August Wilson Center this past Sunday a triumph.

The program, which runs through March 16, opened with the company premiere of Julia Adam's "Ketubah" (2004). Set to Jewish folk music recorded by The Best Little Klezmer Band in Texas, "Ketubah" was a quaint, metaphoric look at Jewish wedding traditions, from a cleverly crafted game of musical chairs representing the matchmaking process, to the wedding-night consummation and celebration.

Inspired by the artwork of Marc Chagall depicting Jewish wedding rituals, the ballet, in seven nicely danced vignettes about the pre-wedding rituals of the bride (Caitlin Peabody) and groom (Cooper Verona), had a Fiddler on the Roof vibe and ease about it. Infused with folk-dance steps, the ballet shone in several standout sections. These included "The Parent's Agreement," where Elysa Hotchkiss, as "mother," danced a tender pas de deux with Verona that ended with her cradling his head. An equally soft and delicate pas de deux between Peabody and Verona found the betrothed pair mimicking Chagall's "Floating Lovers" paintings, with Verona spinning in circles as Peabody was clasped to him like a backpack. And the ballet's concluding celebration dance was intoxicating.

The ease of Adams' ballet gave way to the world premiere of Viktor Plotnikov's "In Your Eyes," which seemed to flaunt its technical difficulty a la a Paganini violin concerto. Danced to music by Dvorak, played live by members of the Pittsburgh Ballet Theatre Orchestra, Plotnikov's contemporary ballet choreography for six couples wonderfully challenged PBT's dancers with elegant, interlacing and weight-sharing partnering that proved a marvel of choreographic skill and inventiveness. Masterful transitions between the couples' dances, along with quirky dancer head-bobbles and gestures, plus a comedic middle section in which female dancers were "pantsed" of their tutus, all added character to this unique gem of a ballet.

The program closed with Dwight Rhoden's 2007 jazz-cabaret ballet for PBT, "Smoke 'n Roses." Set to songs sung by Etta Cox, the ballet was smart, smooth and stylistically beautiful. Highlights included the consistent and sharp performances by PBT's dancers, especially in the sleek, melancholy vignette danced to the song "Everything Must Change."