“Jerry was about the art and he wanted people to dance to their fullest potential… he was a great artist, choreographer and a perfectionist.” 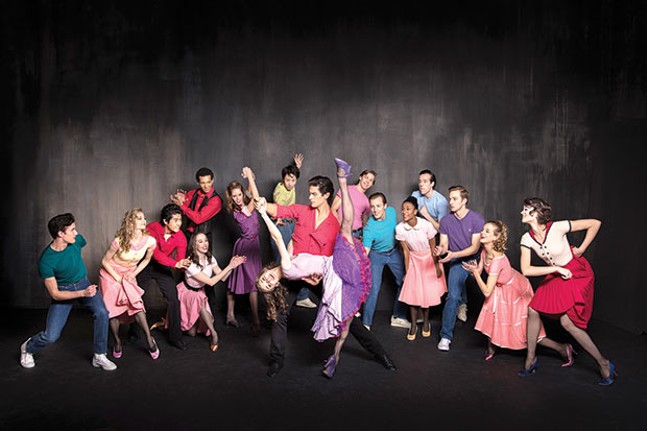 As part of the global celebration of the 100th birthday of late choreographer/director Jerome Robbins (1918–1998), Pittsburgh Ballet Theatre, along with the PBT Orchestra, will close out its 2017-18 season with three of the theater, movie and television icon’s dance works.

Closest to PBT artistic director Terrence Orr’s heart, Robbins’ masterwork “Fancy Free” (1947) will be featured. It’s a ballet Orr not only danced in but also staged for other dance companies.

“[Robbins] got me to teach it to New York City Ballet … but he didn’t want the 1965 version I had danced but the original 1947 version,” says Orr. “He gave me these small reels of film shot from the wings of a performance in South America and I went through quite a learning process to really understand the ballet.”

The 29-minute WWII-era ballet about the exploits of three sailors on leave in New York was inspired in part by American artist Paul Cadmus’s 1934 painting “The Fleet’s In,” as well as the friendship Robbins’ had with two of his fellow dancers at Ballet Theatre (now American Ballet Theatre). It launched the young choreographer’s career and that of its composer, Leonard Bernstein, who was unknown at the time.

Later the inspiration for the musical On the Town, “Fancy Free” is a microcosm of all that would come to characterize Robbins’ choreographic greatness. Clever, technically demanding and dense with animated movement storytelling, the ballet is genius.

“Jerry [Robbins] was about the art and he wanted people to dance to their fullest potential… he was a great artist, choreographer and a perfectionist,” says Orr.

The program will also feature a 36-minute suite from Robbins’ signature work West Side Story for which he won a 1957 Tony Award, as well as two Academy Awards for the 1961 film adaptation. Set to another of Bernstein’s iconic scores, the suite is a distillation of five dances from the Broadway musical included in the 1989 musical Jerome Robbins' Broadway, plus another solo Robbins created to “Something′s Coming”.

PBT’s cast of 41 dancers will sing as well as dance in the familiar modern adaptation of Shakespeare’s Romeo & Juliet.

“It’s a well-rounded shortened version of West Side Story,” says the ballet’s repetiteur Julio Monge. “Robbins is all about intentions in his choreography. There is a lot of sass and punch and American musical theater energy in it that he was the master of.”

Rounding out the program will be Robbins’ “In the Night” (1970). Danced to four nocturnes by Frédéric Chopin, the 21-minute ballet tells of “three contrasting sets of lovers, from innocent to impetuous, who meet beneath a midnight sky.”