Orr says he chose Canadian choreographer James Kudelka’s “The Man in Black” partly because it is unique, but mostly because he is a fan of Kudelka. “I have known him for over 30 years and he is a very creative choreographer whose work takes off on different tangents,” says Orr. 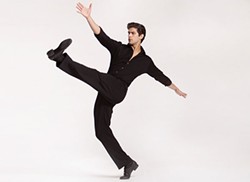 “The Man in Black,” set to cover songs recorded by a gravel-voiced Johnny Cash at the end of his career, including Gordon Lightfoot’s “If You Could Read My Mind,” The Beatles’ “In My Life” and Nine Inch Nails’ “Hurt,” is perhaps the most foreign in movement language of any ballet PBT has ever done. At the ballet’s premiere, in 2010 at Columbus’ BalletMet, I found it a quiet, distinctive work. The dancers, in Western attire, shuffle along in movement structured like a country-and-western line dance “only taken to much more intricate and poetic ends by Kudelka,” I wrote in my review for Dance Magazine.

PBT principal dancer Yoshiaki Nakano’s newly expanded version of “A Fellow Feeling” (2015) will be the first main-stage ballet created by a company dancer that the PBT has performed during Orr’s 19-year tenure. (It’s part of Orr’s initiative to give his dancers choreographic opportunities.) Set to music by Mozart, a portion of the abstract, neoclassical ballet debuted at last summer’s Ballet Under the Stars program at Hartwood Acres.

Completing the program is a reprise of an Orr favorite, Antony Tudor’s 1936 masterpiece “Jardin Aux Lilas” (“Lilac Garden”). The heartbreaking mini-story ballet, last performed by PBT in 2013, depicts a young woman engaged to marry a man she does not love.