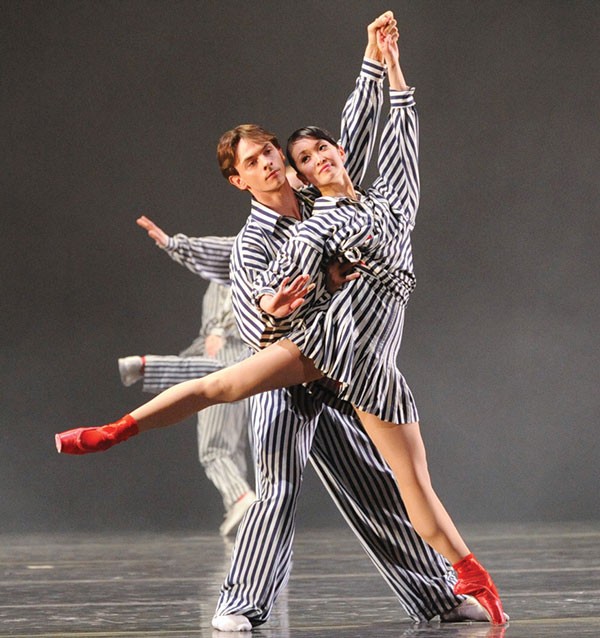 Pittsburgh Ballet Theatre kicks off its 44th season with An Evening of Twyla Tharp, a salute to the irrepressible Emmy- and Tony Award-winning stage and screen choreographer. The Oct. 25-27 program features reprises of two of Tharp's most popular works.

First performed by PBT in 2006, the 35-minute "Nine Sinatra Songs" (1982) has a ballroom setting and features seven couples costumed in gowns and tuxedos designed by Oscar de la Renta. It's filled with songs like "Strangers in the Night," "One for My Baby" and "My Way."

The work's répétiteur, Shelly Washington, says that the duet-filled dance work is built from vignettes about infatuation, the allure of a stranger, forever love and a couple's bickering. The work's appeal comes from its blending of the sophistication of ballroom dancing, Tharp's sly humor and loose modern dance approach ... and, of course, Sinatra's music.

Completing the program is Tharp's "In the Upper Room," last performed by PBT in 2010. Borrowing its title from the gospel song by Mahalia Jackson, the work evokes a heavenly setting where stage fog and lighting by Jennifer Tipton make it seem as if the 13 dancers appear and disappear out of and into thin air. Set to a driving original score by Philip Glass, this 40-minute barrage of technical and pedestrian movement mingles ballet and modern dance and takes both dancers and audience to the edge of exhaustion.

Washington, an original cast member in the work, says that in the mid-1980s, Tharp added several ballet dancers to her modern-dance company. That move might have inspired her division of dancers in "In the Upper Room" into tennis-shoe-wearing modern dancers known as "stompers" and pointe-shoe-wearing ballet dancers, or the "bomb squad."

"A lot of people insisted on a wall between modern dance and ballet. I'm beginning to think that walls are very unhealthy things," Tharp once said. "In the Upper Room" might mark the start of her demolition project: During the piece, for instance, one dancer transitions from "stomper" to "bomb squad" member. Meanwhile, over the course of the work, the entire cast strips away their team costumes to reveal a unified red, perhaps symbolizing the blood that courses through all our veins.