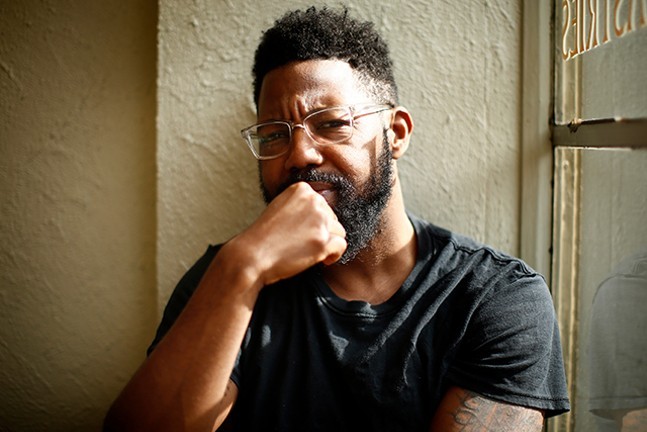 CP Photo by Jared Wickerham
Damon Young
Damon Young, the Pittsburgh-based author of What Doesn’t Kill You Makes You Blacker, announced he will be leaving his blog, Very Smart Brothas, more than a decade after its start.

"I felt like I'd gone as far with that form and that format as I can go," Young tells Pittsburgh City Paper.

In a letter titled "I'll Be Around," posted to the site on Fri, April 30, Young mused about his time starting VSB in 2008 and the ways he has changed and grown as a person since its inception. In the post, Young writes about the three-year anniversary party of VSB.

“Watching the video of that party feels like I’m watching a different person," Young writes. "I was physically different. Leaner, less hairy, less tattooed … but mostly I see someone struggling to fit in his own skin. It’s like, you know how it feels to put a glove on backwards, where your thumb gets stuck where your pinky’s supposed to be? And maybe people can’t tell your glove is fucked up, but you can? That’s how I felt. That’s who I was.”

Young goes on to tell readers about his many successes since then, including his book deal and selling VSB to Univision in 2017, as well as a a new podcast venture and a screen adaption of his book by “a famous Hollywood person.” The post, all in all, is a love letter to the space Young has created for Black writers and his collaborators, namely Panama Jackson, who co-founded VSB with Young and is continuing to work on the site even though Young is moving on to new projects.

VSB has been a place for very smart Black voices for all of its years, including Young’s own writing. Known for publishing everything from satirical, tongue-in-cheek pieces to cultural commentary to heartfelt personal essays, VSB has hardcore fans who have already taken to social media to express how much they'll miss Young’s voice on the platform.

Young likened writing for VSB to playing basketball at Rucker Park, a popular park in Harlem.

"You're playing in front of audience that appreciates basketball, you know, that also is going to give it to you if you mess up," he says. "A hard audience, but it's an audience that loves the sport, loves the game, and just wants to see people give their best effort."

Through VSB and many other outlets, Young has been a vital voice highlighting the Black experience in Pittsburgh and throughout the country. In February 2019, he spoke to Pittsburgh City Paper about the trauma of being Black in Pittsburgh prior to the March release of What Doesn’t Kill You Makes You Blacker, a memoir pulling together many of Young's personal essays.


“The city wants to believe it is the bastion of progress, but that progress doesn’t extend to Black people," he said of Pittsburgh in 2019.


"I feel, I guess, gratified, validated, touched, verklempt," he says of the lasting legacy that VSB has left for Black writers in Pittsburgh and beyond.