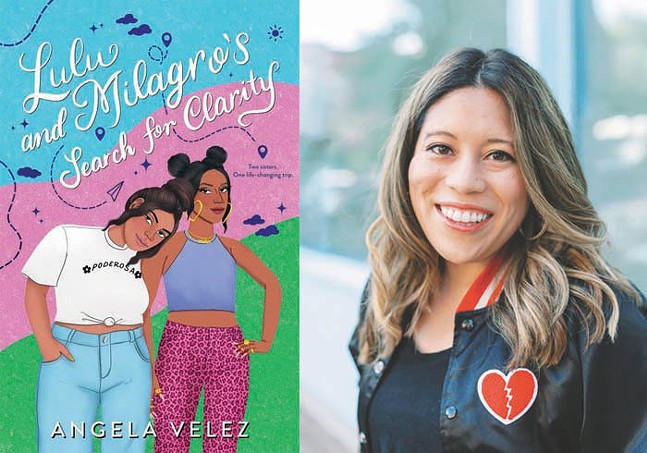 Photo: Harper-Collins/LeeAnn Stromeyer
Lulu and Milagro’s Search for Clarity author Angela Velez
Choosing a college can present a stressful challenge for any young person. When you’re the first generation in your family to continue your education after high school, that process, while exciting, can be even more difficult to navigate. A Pittsburgh-based author explores this idea in a new book that draws on her own life as a child of immigrants.

Released on Feb. 8, the young adult novel Lulu and Milagro’s Search for Clarity follows two sisters who, according to a press release from publisher Harper-Collins, “couldn’t be more different, but become begrudging partners on their school’s cross-country college trip.” Described as a combination of the coming-of-age comedy film Booksmart and the television series Never Have I Ever, the story takes Lulu and Milagro on a journey from Baltimore all the way to San Francisco, as they try to get to the root of their older sister’s feud with their mom, and “maybe even discover the true meaning of sisterhood.”

The book marks the literary debut of Angela Velez, a local author and University of Pittsburgh writing instructor who based the story around her own experiences growing up Peruvian American in Baltimore, Md. As a result, the book is also described as a “very specific exploration of the familial responsibilities and expectations" on first-generation, Peruvian American kids, and "what it means to be a Latina woman carving your own path in this world.”

“My parents didn’t fully understand the college process,” says Velez, who went to Pitt for graduate school and has lived in Pittsburgh for six years. She adds that her parents just told her to go to the best school and figured that majoring in English would eventually lead to a “more lucrative career” in law or marketing.

Velez says she never even explored the possibility of creative writing until the last semester of her undergraduate senior year, and that the journey to writing Lulu and Milagro’s Search for Clarity was one clouded with doubt.

“I think there's a lot of imposter syndrome that happens when you don't see authors of color, when you don't read, really, that many books by people with similar backgrounds as you,” says Velez. “And that was another big inspiration in wanting to write this story and have the story out there.”

While her book focuses on Latina women, Velez says that her background working as a college admissions officer made her realize the universality of being a first-generation college student in the United States.

“When I worked admissions, most of my area was the Southwest, Texas, Arizona, New Mexico. So I was seeing a lot of Latinx immigrant kids, and working at Pitt, it's certainly not as diverse in that way,” says Velez. However, she says Pitt is still a big destination for first-generation college students who come from various parts of western Pennsylvania, the Appalachian region, and the Ohio Valley.

“I find it's a really common experience, regardless of your background, if your parents maybe didn't pursue a four-year college degree and, you know, are supportive of you, but don't really know what it entails,” says Velez.

While the book takes place over a cross-country trip, Velez wanted to represent her adopted city by having the sisters visit a fictional Pittsburgh college (Mononghehela University) and patronize local real-life businesses, including the now-defunct performance space Glitter Box Theater.

Velez says she is already working on her second YA book (Lulu and Milagro’s Search for Clarity is part of a two-book deal) and teases her follow-up as a “sort of love letter to Pittsburgh.”

“Pittsburgh is a really amazing city to be a writer in,” says Velez.