CP Photo: Jared Wickerham
Suraj Nepal, Board Chair of the Bhutanese Community Association of Pittsburgh, poses for a portrait on Sun., May 9.
As the region’s Asian population has increased, so too has its options for Asian cuisine. Throughout the city and surrounding areas, offerings for Chinese, Taiwanese, Vietnamese, Indian, Thai, Korean, and more abound.

For some, restaurants and perhaps an occasional cultural festival may be the primary way of interacting with Asian and Pacific Islander cultures. But these communities and cultures consist of more than what can be consumed, and local heritage organizations provide touchstones of support, education, and community for Asian American and Pacific Islander residents and visitors in Pittsburgh.

“I would love it if we had a way of sharing out with the community that we're more than just restaurants,” says president of the OCA (Organization of Chinese Americans) Pittsburgh chapter Marian Lien. “We're more than just that once-a-year, when you're bored of winter time, and you want to see something vibrant and beautiful and colorful coming down the street and you decide to go to the parade.”

What became AAPI Heritage Month began in 1976 when former Capitol Hill staffer Jeanie Jew wanted to designate a week to recognize Asian and Pacific Americans after witnessing a lack of recognition for them during the country’s bicentennial celebrations. Jew also wanted to celebrate her great-grandfather, who worked as a laborer helping to build the transcontinental railroad. Asian organizations — including the Organization for Chinese Americans, of which Jew was a member — launched advocacy campaigns in support.

In 1978, former President Jimmy Carter signed the first Asian/Pacific American Heritage Week into existence to commemorate the completion of the transcontinental railroad on May 10, 1869, which was built in part with Chinese labor, and the arrival of the first Japanese immigrant in the U.S. on May 7, 1843.

More than 40 years later, the OCA, which rebranded as the OCA-Asian Pacific American Advocates in 2013, continues to fight for Asian Americans and Pacific Islanders, and its Pittsburgh chapter does so through a combination of community outreach and aid; festival celebrations, including the Lunar New Year parade and banquet, and the Dragon Boat Festival; and, cultural and educational programs for Asian youth, such as Chinese yo-yo lessons and lion and dragon dance lessons.

Especially for programs meant for local Asian youth, the OCA prioritizes not only the passing on of cultural traditions but also the ability for youth to get to know each other and foster a sense of community, as well as develop their own Asian American identities that are distinct from their parents or grandparents.

“I have a photograph of them, like decked out in their resplendent silk costumes, right? But then in their hands is this Big Mac, you know? Then they have bubble tea in the other hand,” Lien says. “That is, for us, why we do the work we do to make sure there's, well, yes, we want them to carry on the language too, but [it’s] for their self-esteem, for their self-worth, all of that.”

As the largest among AAPI populations in Pittsburgh as of 2018, with about 37% of the population with self-reported Asian ancestry, Chinese people also have one of the longest histories of community members and organizations in the city, stretching back to the Hip Sing and On Leong tongs in the late 19th- and early 20th-century Chinatown. Not all Asian and Pacific Islander groups have had similar experiences with settling into the region and establishing large multigenerational communities, and community and cultural organizations still provide support regardless of when people arrived and how long they intend to stay.

Among them is the Japan-America Society of Pennsylvania, which is based in Pittsburgh. JASP develops cross-cultural and international relations through business, cultural, and educational programs for Japanese residents, as well as those interested in Japanese culture. While the organization occasionally encounters people who fetishize Japanese culture, they try to turn these instances into learning opportunities, and they work with local teachers to understand and fulfill educational needs and interests.

JASP’s focus on business and international relations, along with the emphasis on teaching Japanese culture, rather than fostering a new Japanese American identity and culture in the U.S., reflects the motivations of many Japanese people living in the region.

“I think we really don't have much presence of Japanese and Japanese culture in Pittsburgh,” JASP educational outreach coordinator Katsuko Shellhammer says, and although she highlights the families who came to the Pittsburgh region after being released from WWII internment camps — to varying levels of acceptance — she mentions that many of them later moved out of the region.

Shellhammer and JASP executive director Amy Boots also note that many Japanese people do not come to Pittsburgh to stay long term, but rather to do work rotations or complete school. This is reflected in JASP’s programming, as well as in the Japanese language schools in the region. One of which, the Pittsburgh Japanese School in Fox Chapel, teaches classes in Japanese and has its curriculum set by the Ministry of Education, Culture, Sports, Science, and Technology of Japan to ensure that the Japanese children currently in the region will be able to keep up with their peers in Japan.

Other AAPI communities also have language schools with varying educational goals and intended audiences, such as the Pittsburgh Central Korean School — also known as the Korean School of Pittsburgh — in Shadyside, described on its website as catering to “second-generation locally-born Koreans.” The Pittsburgh Chinese School in Squirrel Hill, one of many Chinese schools in the area, primarily serves Chinese-heritage students with an eye towards preparing them to meet what its website refers to as “the challenge of globalization.” While some communities do not have specific cultural organizations, many use houses of worship as community touchstones, such as local Korean churches and the Sri Venkateswara Temple in Penn Hills, the latter of which, according to its website, was constructed partially with funds from first-generation Indian immigrants who wanted to maintain ties with their culture. 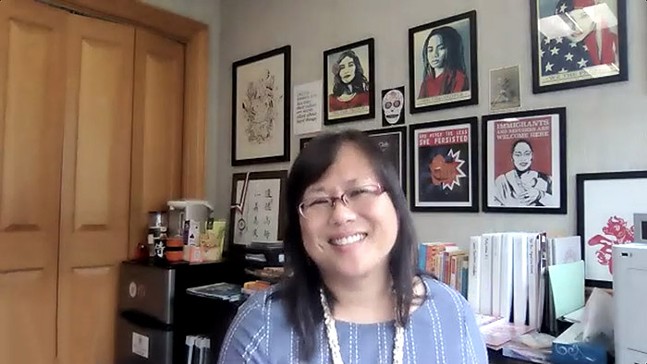 Marian Lien, president of the Pittsburgh branch of the OCA, speaking during an AAPI Heritage Month Panel discussion at CCAC on Wed., April 29
Some community members also choose to get involved with cultural groups outside of their birth cultures or heritage cultures, especially those for whom there is not a large community or established community organization. While “Asian American” originated as a political term to organize coalitions of smaller Asian communities, some criticize the term — and the broader “AAPI” umbrella term — because it can obfuscate the needs and experiences of South and Southeast Asian people, along with Pacific Islander groups, in favor of centering East Asian communities.

These communities have histories that create different needs and challenges, such as the growing Bhutanese community of Pittsburgh, which is comprised of Bhutanese refugees who came to the U.S. by way of refugee camps in Nepal. The Bhutanese Community Association of Pittsburgh provides support and cultural education for Bhutanese residents, and BCAP board chair Suraj Nepal emphasizes that “our doors are not only for Bhutanese, our doors are for anyone who needs support.”

“We have tried to look for opportunities to grow, to better identify our strengths, our weaknesses, and our own identity being a newly arrived immigration population,” Nepal says. “Being counted in the larger population, it does mean a lot. It means that if we have the support, we are being recognized, and there is somewhat of representation for us as well.”

The organization also sends out information about events and programs through robo calls and texts, and it has representatives for the major pockets of Bhutanese residents in areas such as Castle Shannon, Brentwood, Whitehall, Baldwin, Carrick, Mount Oliver, and Greentree to ensure that community needs are met.

BCAP also shares and celebrates Bhutanese culture through community events, one of which is usually scheduled to coincide with two Hindu festivals, Dashain and Tihar, to maximize the number of community members who can attend.

“A lot of our teens and young adults [were] born in refugee camps in Nepal. They grew up as any other Nepali citizen. And then, mistakenly, even though we are a refugee, when we are in Nepal, people are mistaken that they are Nepali,” says Nepal. “So that has been one of my emphases on clarifying those to at least say who we are … when we identify ourselves with the nation, we would be Bhutanese.” Like many of the other community organizations, BCAP also focuses not only on supporting its own cultural community but also on engaging with the broader community.

“We also identify opportunities to go out in the community to represent ourselves and introduce ourselves,” Nepal says. “We are always looking for those opportunities … so people have an opportunity to know about us.”

Japan America Society of Pennsylvania (based in Pittsburgh)
Collective of individuals, corporations, and organizations promoting cross-cultural relations and cultural and business education through programming such as Pittsburgh Taiko and school visits
japansocietypa.org

Bhutanese Community Association of Pittsburgh
Aid and programming for Bhutanese residents and others who need it, including an after-school program, civic engagement support, citizenship and immigration assistance, counseling, and recreational activities
bcapgh.org

Bengali Association of Pittsburgh
Connects the Bengali community to their cultural roots of the Indian and Bangladeshi regions and promotes awareness of Bengali culture through traditional musical and dance programs, stage performances, and other cultural events
bengaliassociationofpittsburgh.weebly.com

Taiwanese Association of America, Pittsburgh branch
Supports the Taiwanese community through recreational programs such as a choir and softball club, as well as cultural events such as those for Lunar New Year, Mother's Day, and Mid-Autumn Festival
taapittsburgh.org

If you’re part of an active AAPI Pittsburgh organization that we missed, please email kimrooney@pghcitypaper.com.

CORRECTION: This story has been updated to correct Japan-America Society of Pennsylvania executive director's name, which is spelled Amy Boots, not Amy Boot.