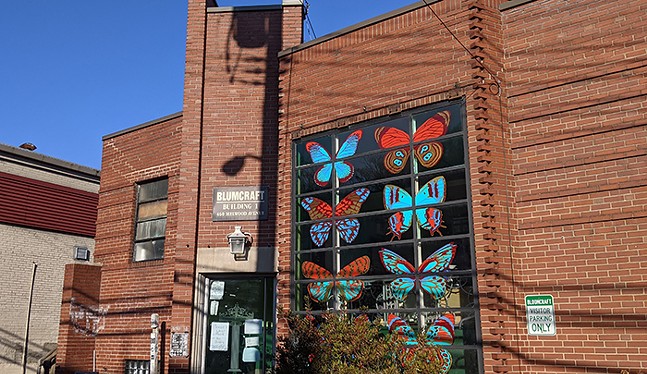 The organizations announced the news this week on their respective social media accounts. For the last few years, both venues offered low-cost, accessible places for local artists, musicians, performers, and activists to meet and host events ranging from live punk shows to political fundraisers to play festivals.

A statement written by the Babyland Collective and posted to Facebook on Sunday reads: "It is with a heavy heart and much collective frustration that we are forced to tell you that Babyland must close its doors at 460 Melwood this July. The owner of the building has chosen to not renew our lease after our initial 5-year term, so we gotta go."


To our collaborators, friends, and greater community, It is with a heavy heart and much collective frustration that we...


Chris St. Pierre, who co-manages Glitter Box with Teresa Martuccio and Nick Stocks, says they, like other venues, had been struggling with paying rent over the course of the pandemic. Glitter Box volunteer Caily Grube says they had been paying a reduced rent of $700 for the last year and that it was expected to return to over $1,000 in May. She says they worried they would not be able to cover the rent increase because they had yet to return to hosting ticketed events.

Before the pandemic, Glitter Box supported itself by renting the space out to non-ticketed events for $15 an hour, or by taking a portion of ticket sales that St. Pierre says was 20% or a maximum of $150 per event.

Without its usual schedule of happenings, Glitter Box tried to stay afloat by hosting two online variety show fundraisers that Grube says raised a total of $5,000.

While rent was a factor, St. Pierre says the "final nail in the coffin" was what they see as the ousting of Babyland, an organization with close ties to Glitter Box.

"We didn't really want to be in the building anymore if they weren't going to be there," says St. Pierre, who is also a member of Babyland and calls the two organizations "kindred."

He adds that they have officially moved out and all the theater's belongings are in storage.

"It was really heartwrenching to pack up Glitter Box from our space in the Bloomcraft Building and think of everything that location meant to so many artists and community makers," says Grube.

A number of organizations have taken residence in the Bloomcraft Building since the former manufacturing facility, originally named Blumcraft, was renovated and began accepting tenants. Glitter Box began operating out of Bloomcraft in 2017. Babyland, a collective of artists and makers named after the highly visible, long closed and destroyed children's furniture store on Penn Avenue, moved in around the same time.

Other groups, including the Black activist media collective 1HOOD and Prevention Point Pittsburgh, a nonprofit that provides resources to those dealing with drug addiction, also reside in Bloomcraft.

As for the future, Grube says Glitter Box still plans on hosting its planned summer programming, including its Ten Minute Play Fest, which will take place on July 17 at a yet undetermined outdoor location. St. Pierre says that before moving into Bloomcraft, Glitter Box had been hosting theater events at different venues around the city, which they plan on doing for the time being.

"Now is a good time for us to be nomadic as we don't feel comfortable being indoors yet," says Grube.

Glitter Box will also apply for relief grants like the Shuttered Venue Operators Grant to help them get back on their feet. They are also accepting donations through their website.

"Depending on what we find, the collective may be able to move as a whole, or parts of what currently make up the Babyland community might become independent groups with independent spaces," reads the post. "Truth be told, we don’t know exactly what it will look like. Once again, with resolve and urgency, we must dream anew."

This is followed by a request for help from anyone who may have property suggestions, with Babyland saying they are "open to a traditional rental agreement, mid-to-long-term, or even the purchase of an affordable building." Anyone interested in replying can email babylandcollective@gmail.com.

St. Pierre and Grube both say they are also looking for a new space where Glitter Box can once again settle and are pursuing a few leads.

"We would like to find a new home very much," says St. Pierre.