On Nov. 21, Mailchimp opened its Small Mall at Ponce City Market in Atlanta, Ga., where the company is based. Described on the company’s website as a “1980s mall-themed pop-up shop,” it was launched to showcase goods from the company’s small business customers as a way to, as Mailchimp puts it, “empower the underdog.” 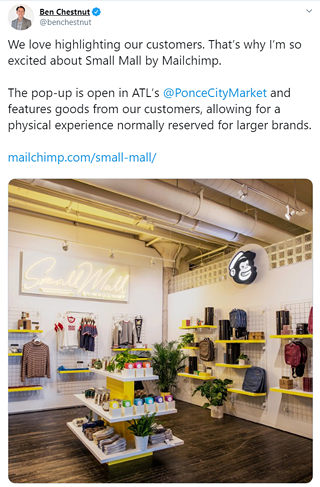 Screenshot of Small Mall announcement and image tweeted by Mailchimp CEO and co-founder, Ben Chestnut.
“Mailchimp was once a small business, too, and the Small Mall is a great opportunity for us to help the brands that we love grow,” says MailChimp director of brand marketing, Michael Mitchell, on the company website.

Besides the name, the concept bears a striking resemblance to the mission of the Small Mall Droege has been running in Pittsburgh since 2015. It started out as a series of pop-ups before settling in a brick-and-mortar location in Lawrenceville in July 2018, where it serves as a marketplace for local artists and crafters to sell their goods.

When asked about the similarities, Mailchimp director of corporate communications, Christina Scavone, sent this statement:

“We created Small Mall by Mailchimp, a temporary pop-up inspired by an '80s mall, as a way to showcase some of our small business customers. We weren’t aware of the Small Mall in Pennsylvania when we came up with this concept, but think what they’re doing is great.”

Photo: Porter Loves Creative
Store display inside the Pittsburgh Small Mall.
Droege, who runs Small Mall along with other ventures through her artist-run/woman-owned business, Casey Droege Cultural Productions (CDCP), says she has “hit a wall” with Mailchimp, adding that the company has not been responsive to her. She says she also has little legal recourse to challenge the name because the Mailchimp Small Mall is being run outside of the Pittsburgh area.

“I’d just like some recognition for the work we’ve done at CDCP,” says Droge, who claims she also uses Mailchimp’s services. “It’s disappointing that we’ve been a customer of Mailchimp for so long and they won’t even respond.”

may you live in interesting times, at 937 Liberty