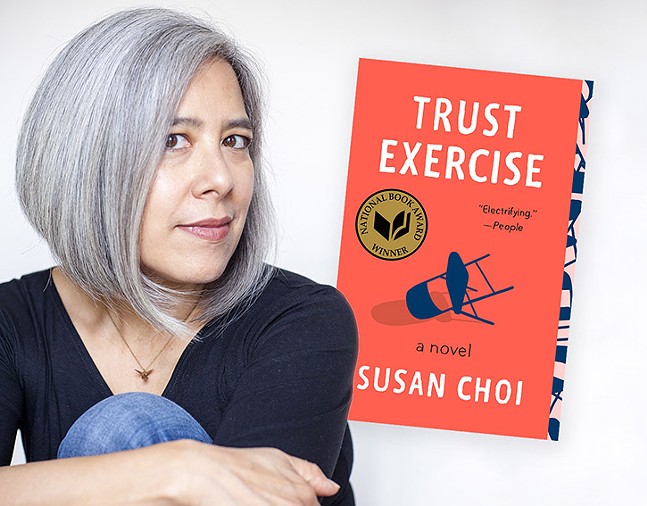 Photo: Heather Weston
Susan Choi
In November 2019, Susan Choi’s Trust Exercise (Holt) earned a National Book Award for best novel. A bestseller, it became one of the most discussed books of the year.

For Choi, the fanfare and acclaim still doesn’t quite seem real. “It definitely hasn’t sunk in at all,” Choi says. “I don’t know if it ever will. It’s exciting, but it’s a funny thing, with publishing, it’s a weird experience for anyone who does it.

“I’m sure publishing an article is the same: you make this thing, and then it goes out there and interacts with other people, and you’re not present for that. So, whatever happens in that process is always a little hard to believe in.”

Trust Exercise begins with the story of two teenagers, Sarah and David, who attend a performing arts high school in a southern city during the early ‘80s. Midway through the narrative, the story flips; another character, Karen, who was written as a reaction to the 2016 presidential election, emerges years later and tells a different version of events. Finally, at novel’s end, a new character, Claire, and another story appear. It is left to the reader to decide which narrator is the most reliable.

It is not lost on Choi, who teaches writing at Yale, that indecision about who is being truthful and who is being less so mirroring the current zeitgeist. “There’s this question of who do you trust,” Choi says. “Storytelling has become so high stakes and it’s not just about novels or fiction anymore. Our politics is completely given over to storytelling, and I guess it always was. It’s possible that politics has always been a realm of storytelling, and it’s just that we didn’t, or maybe I didn’t, discern it and imagine that there was someone who was telling the truth. But it’s about narrative and which narratives can you sell the most people on.”

For Choi, whose previous novels include the Pulitzer Prize-nominated American Woman, Trust Exercise was a revelation in many ways. The novel began as a distraction from another book Choi was working on, an exercise in writing “pages for fun,” she says. But as she became more immersed in the new story, it commanded her attention.


The element of surprise is important to Choi, who doesn’t outline or think too far ahead while writing. If she comes to a point where a scene or element or plot twist occurs that she hadn’t anticipated, that usually means readers will experience a similar sensation.

Thus, Choi adheres to no rules save one: “It just doesn’t work to try to premediate your themes,” she says. “It doesn’t work in fiction. It doesn’t work to say I want to write about these big, thematic abstract issues. It’s never worked for me. I’ve always been preoccupied with characters, the situation the characters are in, something concrete and specific and human.”

The success of Trust Exercise has caused Choi to reflect on why the story resonated with so many readers. It’s not a book she thought would find a wide readership; she imagined the other manuscript she was working, yet to be published, would be more appealing to publishers.

“It’s still surprising to me,” she says of the novel’s success. “I’ve wondered if maybe there is something about my own not really thinking about and worrying about that question of, 'Will it resonate?' is part of what worked.

“At least speaking for myself, and I imagine other writers agree, being really self-conscious of how your book is going to be read is not that helpful. The more you think about what readers will think of this, the less well it’s going to go. It’s possible that because I almost wrote Trust Exercise never really imagining anyone would read it, that might be part of why it works.”Susan Choi at Pittsburgh Arts & Lectures. Mon., Sept. 14 (Virtual event, watch anytime online for one week). $15. pittsburghlectures.org/lectures/susan-choi