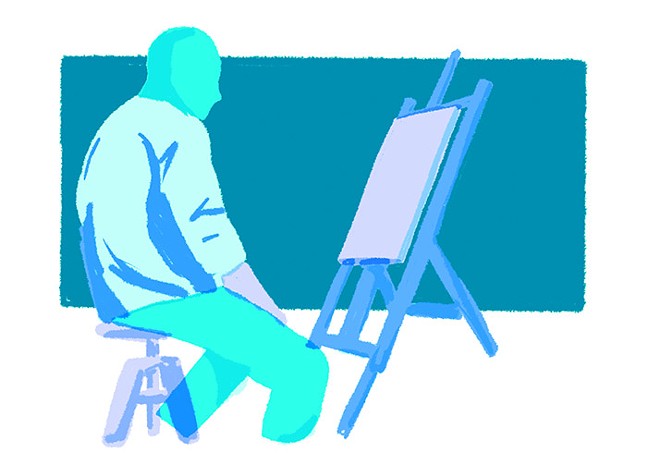 CP Illustration: Lucy Chen
Editor's note: This story contains references to suicide. In her acclaimed 2018 stand-up special Nanette, Australian comedian Hannah Gadsby recounts how a man came up to her after a show to comment on her revealing that she took antidepressants.

“He said, ‘You shouldn’t take medication because you’re an artist. It’s important that you feel,’” she says. He then went on to say that if painter Vincent van Gogh had taken medication, the world wouldn’t have his famous work “The Sunflowers.”

Gadsby, who studied art history, is quick to explain that not only did van Gogh self-medicate with alcohol, but took prescribed medication, a derivative of the foxglove plant that intensified how he saw the yellow hues in “The Sunflowers.” She mentions that he also painted portraits of psychiatrists who were, in fact, treating and medicating him.

“So perhaps we have 'The Sunflowers' precisely because van Gogh medicated,” she concludes to a laughing and applauding crowd.

This bit speaks to a stigma that has long plagued the arts community, where the stereotype of the “tortured artist” who must suffer for their art can affect how creative types are perceived, and lead to consequences for those struggling with mental illness. This is compounded in the U.S. by a system that, due to economic conditions and employment status, leaves many working artists without health care, therapy, and other resources needed to access treatment or crisis help. 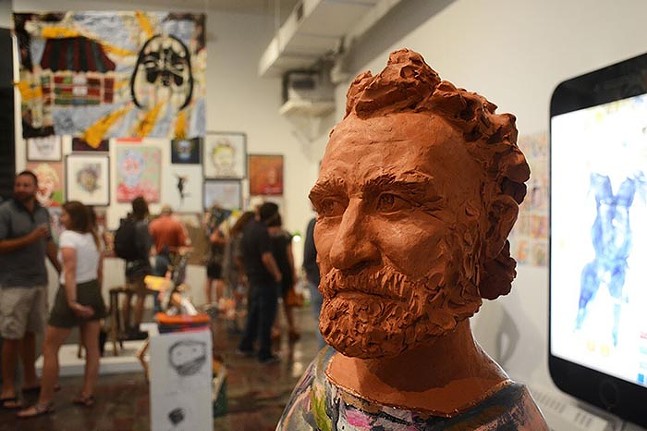 CP Photo: Stephen Caruso
A portion of the 250 pieces of artworks created of late Pittsburgh artist John Riegert for 2016 exhibition at SPACE Gallery
Pittsburgh is not exempt from this issue, which has become apparent in the number of local artists who have died by suicide or mental health-related reasons in recent years. This has been magnified by the pandemic breaking down a sense of community or financial security for many of these individuals.

For Brett Yasko, experience with the issue goes back even before the pandemic, during his friendship with John Riegert, a Pittsburgh artist who died by suicide in November 2018. Before his death, Yasko created a 2016 exhibition that made Riegert, who struggled with bipolar disorder and depression, and had previously attempted suicide, the subject of over 250 portraits by other artists.

In a tragic turn, one of the participating artists died by suicide in August.

The Pittsburgh arts community has mourned the untimely loss of others, like graffiti artist Daniel Montano, who reportedly died of a heroin overdose in 2017, and Alexandra Oliver, an arts educator and activist who died by suicide that same year.

Though it’s impossible to calculate the percentage of artists lost to mental health-related deaths, the issue has become dire enough that Pittsburgh filmmaker and musician Julie Sokolow decided to try and do something about it. Sokolow, who documented Yasko’s Riegert exhibition with her film, The John Show, has been an advocate for increased health care access to working artists. From 2012 to 2014, she produced Healthy Artists, a series of short profiles showing how uninsured or underinsured Pittsburgh artists survived without health care.

After seeing the devastating impact of COVID-19, she decided to pursue a degree at the University of Pittsburgh School of Social Work, where she is currently training to become a mental health therapist.

“I definitely felt more called to it because of the pandemic and the rising rates of depression and anxiety and substance abuse,” she says. “It's a crisis.”

She agrees that artists, compared to those working in other fields, are potentially more vulnerable due to a number of factors. For one, she says audiences may equate an artist’s visibility with success, without understanding the nuances and difficulties of the industry.

“I think the general public in a lot of cases will look at an artist’s show or music concert or film screening and assume that that person is highly successful because they put on a well attended show, or they were in the newspaper, and they'll assume that that person is supported and making good money, and it's just not the case,” she says, adding that band members may have to split $20 between each other after playing a gig.

She says artists often face a lot of stressors from having to cobble together a livelihood.

“Artists tend to have precarious situations as far as piecing together several jobs for income and needing to take an adjunct teaching gig here, some freelance opportunities there, that can lead to feeling pretty unsupported,” she says. “A lot of other folks might get to work a full-time job that has health benefits. And I think a lot of artists are deprived of that opportunity to feel supported in that way.”

Yasko and Sokolow also believe that, due to their profession, artists tend to be more isolated, as they often lack the office environment and other communal aspects that come with more mainstream, 9-to-5 type jobs. Yasko says that, as an instructor at the School of Design at Carnegie Mellon University, he saw the toll isolation took on young arts students forced to participate in classes over Zoom, and how the statewide shutdown, which saw the closing of nonessential businesses like galleries and other arts venues, put artists in a tough position.

“All the places that were a way for them to show what they were working on, all of that just went away so fast, like almost overnight,” he says. “In perfect times, the idea that you've got to come up with stuff that you're going to then put into a gallery, and then you're going to hope for a reaction from someone, to me, that's stressful enough. But then for that to just all go away, literally within a week, for a long period of time? It just goes without saying that that was a huge, huge thing.”

Studies trying to correlate mental health and artistic talent have only solidified harmful stereotypes. In 2015, major news outlets reported that a study from deCODE, a genetics company based in Reykjavik, Iceland, argued that those with a higher genetic risk of bipolar disorder and schizophrenia were more likely to pursue creative professions. Detractors were quick to point out, however, that the research behind the study was too narrow and flawed to draw any real conclusions.

In a 2019 article for Psychology Today, author Ewan Morrison examined how conflating creativity with mental illness could lead to artists depending on producing art as a treatment, or refusing to medicate themselves for fear that it will affect their ability to create. 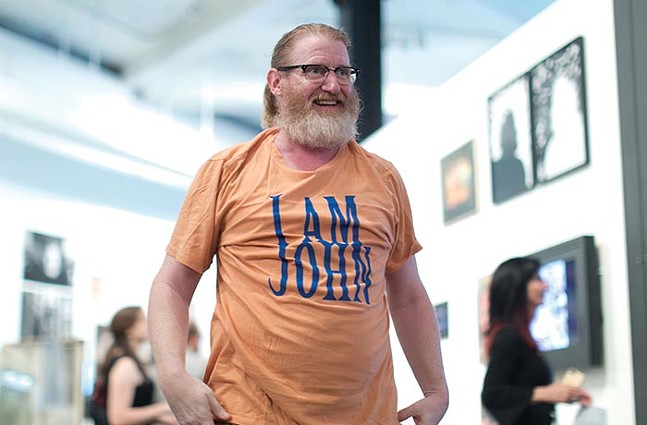 Photo: Joey Kennedy/Courtesy of Brett Yasko
Late Pittsburgh artist John Riegert
Even when artists do pursue treatment, Sokolow says the process of obtaining and sustaining it can be difficult. Yasko speaks to this, saying that while Riegert was able to obtain disability support and medication, and went to therapy multiple times a week, he also felt that assistance could be stripped from him at any point.

“His disability was always tenuous,” says Yasko. “He had to sort of reapply for it, and it was a long process, and he sort of had to fight for it in order to have money to eat and everything like that. … It's funny, because he was always taken care of, but I think that was a burden on him, of worrying that there would be a day where it wouldn’t be taken care of. He talked about that a lot.”

Sokolow believes that addressing this would mean switching to a universal health care model, but until then, she points to some services in Pittsburgh that could help. This includes the Duquesne University Psychology Clinic, which she says is available to uninsured and underinsured patients at a sliding scale, UPMC’s resolve Crisis Services hotline and walk-in center, and Center for Victims.

Yasko believes part of the resolution lies in eliminating the stigma of mental illness, not only for artists, but for people in general. He also thinks artists living with mental illness should be recognized for contributing, whether through their art or through work they do in their community.

“A lot of people maybe take that for granted about just how much energy it takes, if you are struggling to make it through the day, and then, on top of that, you're doing amazing things,” he says. “So I just thought they should be applauded and that should be appreciated.”
If you or a loved one are in need of immediate support, help is available 24/7 at the National Suicide Prevention hotline: 800-273-8255.

Unraveling: A comic artist's journey through alcoholism and recovery in the pandemic