Miller ICA invited several local artists and designers to represent Pittsburgh in the Empowering the Women’s Vote poster campaign, launched as a way to celebrate the centennial anniversary of the 19th amendment that expanded protected voting rights to women. (Though this only applied to white women until the Voting Rights Act of 1965.) On Thu., Sept. 24, Miller ICA will debut the final works during a Pittsburgh Poster Edition Launch and Virtual Exhibition Tour. 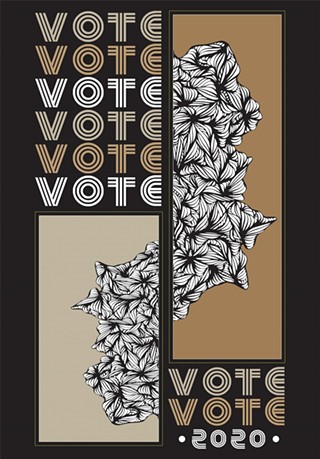 atiya jones
Get Out the Vote: Empowering the Women’s Vote poster by atiya jones

Besides marking important moments in the history of voting rights, Chodos believes the poster campaign comes during an especially fraught, and critical election year.

“This is a highly charged moment in history given the context of the pandemic and the surging Black Lives Matter movement within a country that is intensely divided along political lines,” says Chodos. “This project aims to catalyze voter participation in the upcoming election, as well as serve as a backdrop for discourse around our current political moment and the complex history of voting rights.”

Members of AIGA, a longtime, international organization for design professionals, originally conceived the poster campaign in 2018 as a “historic opportunity to unify and celebrate women of design while focusing their talents toward an important civic goal,” according to a press release. AIGA partnered with the League of Women Voters and other nonprofits to dictate the focus of this year's campaign.

“For more than a century, women have played a fundamental role in shaping an inclusive and active electorate. Women have powered—and continue to power—the vote,” says Virginia Kase, CEO of the League of Women Voters of the United States. “Even as this year continues to bring unprecedented challenges to our communities and our democracy, we know that our nation is at its best when everyone has a chance to participate.”

Besides Miller ICA, posters from the Empowering the Women’s Vote campaign will be on view at a variety of educational and cultural institutions, including Michigan State University’s Union Art Gallery, The Printing Museum in Houston, Tex., and the RISD Museum in Providence, RI.

In-person visits to the Miller ICA exhibition will only be open to CMU students and faculty, but the public is invited to attend the free virtual event taking place on Thu., Sept. 24 at 5 p.m. (you can RSVP on Facebook) or schedule a virtual tour by emailing miller-ica@andrew.cmu.edu.