Exhibit includes more than 100 works by 80-some artists 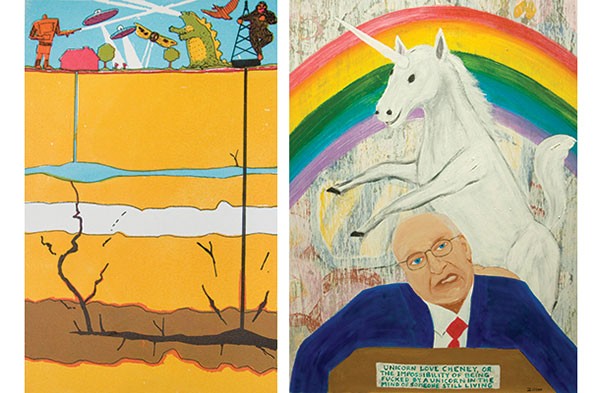 The exhibit Pittsburgh Artists Against Fracking was organized in support of Protect Our Parks, a coalition fighting to prevent hydrofracturing for gas in Allegheny County's public parks. Protect Our Parks distributes information, speaks out, meets with officials and circulates petitions. It's not surprising that many local artists support the group, and a portion of all sales from this Garfield Artworks show will be contributed to Protect Our Parks. (Last week, Allegheny County Council voted to permit fracking beneath Deer Lakes Park.)

Art exhibits addressing significant issues are a tradition, and the fracking of local parks is certainly a significant issue. Exhibit organizer Bob Ziller wanted to be inclusive, so he didn't require artworks to address fracking directly, though he encouraged participants to exhibit works relating to nature. With more than 80 artists — almost all from Pittsburgh currently or previously — and more than 100 artworks, the exhibit makes a dramatic statement through quantity alone.

Some works explicitly address environmental concerns. In Sandy Kaminski Kessler's "Danger Danger," the robot famous for warning "danger, danger" on the television show Lost in Space appears to issue an environmental warning, as it's drawn on a topographical map. Kyle Milne's "Untitled Maps" features a mound of what appear to be gobs of tar on a mining map, creating an unnerving depiction of the waste left over from resource extraction. Thommy Conroy's "Diagram F" shows a cross-section in which sci-fi creatures battle on the surface while drilling contaminates the water supply.

Most compelling in the context of the exhibit are those works that address fracking more or less directly. David Pohl's "Let them drink benzene, toluene, xylene, and ehtylbenzene" is graphically strong, and the Marie Antoinette-inspired statement clearly condemns recklessness regarding the public's health. In "Fracking the Body," Maritza Mosquera likens the slow healing of the body after invasive surgery to the healing the earth requires after being cut into for fracking.