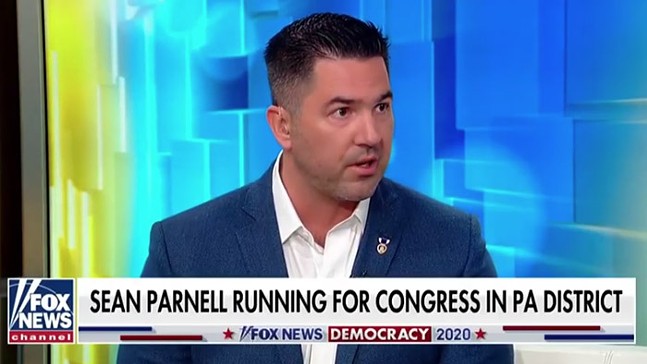 A screencap from Sean Parnell's appearance on FOX News, included as part of a campaign video on seanforcongress.co
Republican congressional candidate Sean Parnell is running against U.S. Rep. Conor Lamb (D-Mt. Lebanon), and he has made a large part of his campaign about natural-gas drilling, aka fracking.

Parnell tweets about fracking frequently, including a steady stream of criticism of Democratic presidential candidate Joe Biden, Lamb, and many others for not supporting fracking enough. Many times, Parnell’s claims are expected for a Republican in southwestern Pennsylvania. He talks about the supposed economic impacts of natural gas industry and he rarely brings up the environmental impacts.

But recently, he spoke to the right-wing website the Daily Caller and shared a complete falsehood about the number of jobs in Western Pennsylvania’s oil and gas industry.

On March 17, Parnell said that “over 100,000 oil and gas jobs in Western PA would vanish” under a plan proposed by Biden that would ban new permits for oil and gas drilling on federal land and offshore. (Only about 2% of Pennsylvania is comprised of federal land.)

Even if factoring in jobs that are supported by the state’s fracking industry, the state still only has between 20,000 to 50,000 of those, according to the Pennsylvania Department of Labor and Industry.

A request for comment to the Parnell campaign went unanswered.


.@ConorLambPA GOP opponent -- @SeanParnellUSA -- says PA's Blue Dog Dems are terrified of Lamb's move to throw in with Biden's "no new fracking" plans. Parnell tells me that such an idea could destroy more than 100K oil & gas jobs @DailyCaller https://t.co/oX1ogLeJVE

Industry boosters, like the American Petroleum Association, have claimed the fracking industry has supported more than 322,000 jobs. (However, the full study can’t be accessed on the API website, and instead is just a one page fact-sheet that also claims there are more than 100,000 oil and gas jobs in the state, despite conflicting statistics.)

In fact, the environmental advocacy group Food & Water Watch has taken issue with the API findings, which the group says is often cited by pro-fracking politicians. Last week, Food & Water Watch conducted it's own analysis of the API numbers and compared it to data from the Bureau of Labor Statistics. Food & Water Watch says that API doubled the job figures that are associated with the oil and gas industries.

"Food & Water Watch created a model that more accurately reflects the actual number of jobs in the industry in five categories (oil and gas extraction; support activities for oil and gas operations; drilling oil and gas wells; oil and gas pipeline construction; and pipeline transportation)," read the report. "These five sectors accounted for 621,504 jobs in 2017, and 685,534 in 2018. According to API’s faulty reports, in 2017 there were at least 1,243,800 workers in these sectors."

Regardless, the claim about 100,000 oil and gas jobs seems to be spreading, even though it hasn't been confirmed by any federal or state government. A letter to the editor published yesterday in the Pittsburgh Post-Gazette also claims the natural gas industry in western Pennsylvania's contains "over 100,000 jobs." Parnell retweeted a link with this letter to the editor yesterday.

In December, Pittsburgh City Paper documented how Parnell had a penchant for retweeting troll-bot accounts that regularly spread misinformation.

Even so, the natural gas industry in the Pittsburgh area has been struggling. And that was before actions by foreign countries dramatically lowered gas prices and the economic impacts of the coronavirus closures.

Analysts have noted that there is currently an oversupply of natural gas, meaning that more natural gas is being produced than demand requires, which leads to price drops. The prices have been dropping for the last four years.

This has led the local natural gas industry to shed hundreds of jobs over the last few months.

Some politicians, like President Donald Trump, have claimed that the goal of the natural gas industry is to bring 100,000 fracking and fracking-related jobs to the region. But Parnell’s claim that jobs “would vanish” when it is unclear if they will ever materialize is dubious at best.

And the fracking industry does have some experience when it comes to claiming jobs will arrive that never do. An October 2012 Range Resources commercial claimed that Pittsburgh is the place “where manufacturing will become American again” and ends with the tagline, “Drilling is just the beginning.” Since the airing of that commercial, the Pittsburgh region has lost about 6,900 manufacturing jobs and Range Resources has sold off several assets it owns in the Pittsburgh region.