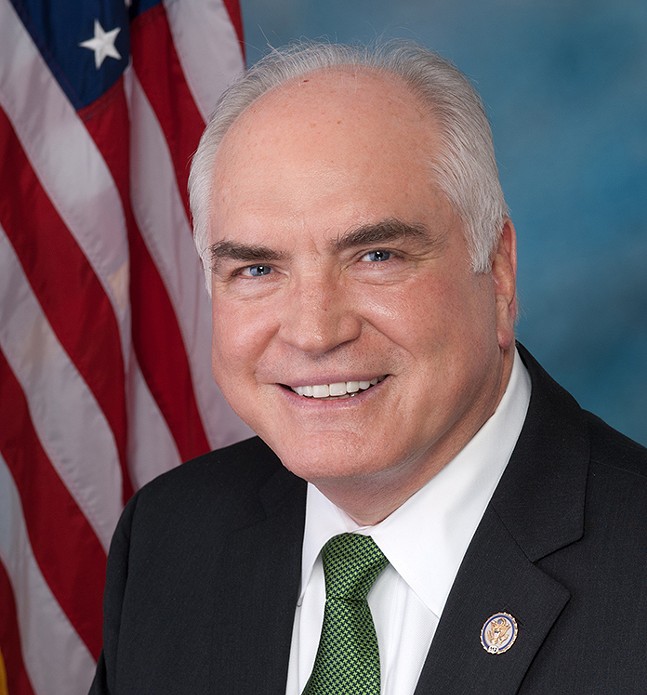 Saying they want to unite the party in an attempt to win back the House in the 2022 midterm elections, GOP lawmakers in a closed door meeting removed Cheney (R-Wyo.) in a voice vote. Rep. Virginia Foxx (R-N.C.) introduced a resolution to strip Cheney of her post as conference chair, the No. 3 leadership job.

In prepared remarks, Foxx said that the party had lost its confidence in Cheney, the third-term daughter of a former vice president. Cheney serves as Wyoming’s lone member in the House.

“Our conference’s main goal now is fighting for sound, conservative policies that will resonate and regain the majority in 2022,” Foxx said. “Unfortunately, we have been distracted from that goal by your continued statements sowing confusion with the public on our message and agenda.”

“Therefore, it appears to me and to most others here that you should no longer represent us as conference chair,” Foxx added.

Taking to Twitter, U.S. Rep. Mike Kelly (R-16th District) observed that, “As the Representative from Wyoming, Liz Cheney can vote however she wants and answer to her constituents. The job of Conference Chair is to represent our entire conference, which she has consistently failed to do. I voted to remove her from leadership just as I did on February 3.”

During a press conference after her removal, Cheney said that Republicans could not uphold the Constitution while also embracing “the Big Lie,” Trump’s claim that the election was stolen from him.

That lie led to the insurrection at the U.S. Capitol on Jan. 6, led by a mob of pro-Trump supporters who tried to stop lawmakers from voting to certify the Electoral College votes.

“We must go forward based on truth,” Cheney said. “I will do everything I can to ensure that the former president never again gets anywhere near the Oval Office.”

Rep. Elise Stefanik (R-N.Y.) is currently in the running to replace Cheney and has the backing of House Minority Leader Kevin McCarthy (R-Calif.) and House Minority Whip Steve Scalise (R-La.) among other House Republicans.

“The only way to stop Speaker Pelosi’s destructive agenda is if Republicans are united,” Rep. Ashley Hinson (R-Iowa), a broadcast journalist elected in November in Iowa’s 1st Congressional District, wrote on Twitter.

She endorsed Stefanik as “the right person to unify our conference behind one message & help us deliver that message to Americans. We should vote to elect her as our Conference Chair immediately.”

“The Republican denial of the truth presented by Congresswoman Cheney is reflected in their denial of the need to seek the truth in a January 6th commission and to repair the damage of January 6th with a security supplemental immediately,” she said. “For the sake of our democracy, reasonable Republicans across the country must take back their party.”

More than a dozen House Republicans tried to oust Cheney from her position in February, but she managed enough votes to keep her spot and retained the backing of McCarthy and Scalise.

She gave a scathing House floor speech Tuesday night in which she warned her party was moving in the direction of authoritarianism and ignoring the rule of law.

“Remaining silent and ignoring the lie emboldens the liar,” she said. “I will not participate in that. I will not sit back and watch in silence, while others lead our party down a path that abandons the rule of law and joins the former president’s crusade to undermine our democracy.”

Some Republican lawmakers took to Twitter to defend their decision to remove Cheney and even celebrate her ousting.

Rep. Matt Rosendale of Montana simply posted a photo on Twitter that read “Mission Accomplished,” with a retweet of a news alert about Cheney’s removal.

Rep. Lauren Boebert of Colorado tweeted that “Liz Cheney’s using her talking points to audition for a job as a CNN commentator.”

“The notion that a small minority of the Republican Party is going to eviscerate the influence of President Trump was never plausible, and it was never good,” Rep. Dan Bishop of North Carolina said on Twitter.

“Our voters are demanding that we fight back against the radical Left agenda, we have to get back to that.”

Stefanik, who is currently running unopposed for conference chair, released a statement urging her Republican colleagues to support her efforts to help them win back the House, which they lost in 2018, and push back against President Joe Biden’s policies.

“Our members should be provided key messaging points to fight back against the Far-Left media narrative on the issues most important to our constituents,” she said. “A unified leadership team is the key foundation as we work to regain the Majority.”

“Republicans need to be united in opposing the socialist agenda President Biden and the Democrats are trying to force on America,” tweeted Rep. Lisa McClain of Michigan. “Today, I voted to move the conference forward on a united front.”

“House Republicans made the right choice,” tweeted Rep. Buddy Carter of Georgia. “We need a Chair who is focused on the future not the past. The foundations of our nation are under attack & we must fight back. We need a Chair who will unify our message against the greatest gov intrusion into our lives we’ve ever seen.”

“I voted a second time to remove Liz Cheney as the chair of the GOP,” tweeted Rep. Marjorie Taylor Greene of Georgia. “And I stand alongside 74 million+ Trump supporters in opposing Cheney’s Trump derangement syndrome.”

Some Democrats came to Cheney’s defense.

Rep. Jamie Raskin (D-Md.) wrote on Twitter that it was dangerous for the Republican Party to continue spreading lies about voter fraud. The Justice Department under Trump found no evidence of voter fraud in the 2020 election.

“Political parties that promote lies and propaganda are setting their countries up for authoritarianism and fascism,” he said. “The cancellation of Liz Cheney by Trump and the GOP is a flashing red danger sign for our democracy.”

Rep. Gerry Connolly (D-Va.) also wrote on Twitter that while he doesn’t often agree with Cheney, he said she was doing the right thing by telling the truth.

“Trump lost and Biden won,” he said. “Her colleagues know this too. That’s why the cowards expelled her from leadership through a voice vote. Shameful.”

“I have little to nothing in common with @RepLizCheney, but applaud her for having the courage to stand up to #DonaldTrump’s Cult of Cowards,” tweeted Rep. Frederica Wilson of Florida.

“The Wisconsin GOP Congressional delegation all goes down the rabid, I mean rabbit, hole,” tweeted Rep. Mark Pocan of Wisconsin. “Sad to see the GOP continuing their cult-like behavior. Leadership means standing up for the truth, even if it hurts."Ariana Figueroa covers Washington D.C. for States Newsroom, which supports the Pennsylvania Capital-Star, where this story first appeared.