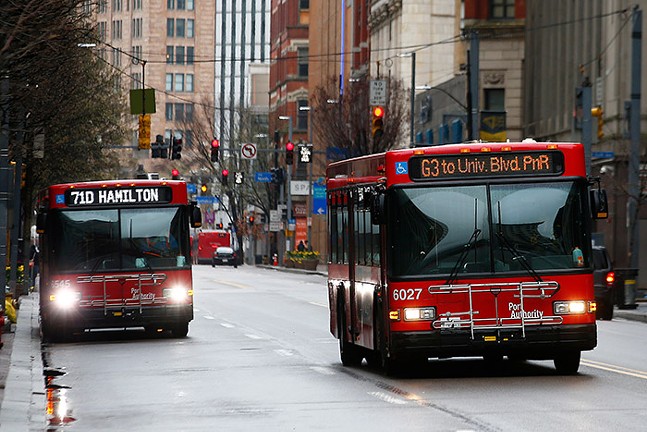 The bill, known as the CARES Act, allocated $25 billion for public transit throughout the United States. According to Casey’s office, Pittsburgh-area public transit agencies will receive $162.1 million in aid. The funds will be administered through the Federal Transit Administration (FTA).

Casey said in a press release the funds will go to support transit operations, pay employees who can’t work during the pandemic, and keep buses and trains operating for those who rely on transit.

“Our public transit systems are a backbone of our communities and I will continue to work to ensure they receive the resources they need during this time of national crisis,” said Casey.

Port Authority of Allegheny County spokesperson Adam Brandolph heralded the federal relief funding. Port Authority is the largest public-transit agency in the Pittsburgh metro area, and according to a press release will receive $141.75 million.

“We are tremendously grateful to our local, state, and federal officials whose response to this epidemic has been nothing short of heroic,” said Brandolph in a statement sent to City Paper.

Brandolph said this federal funding is especially crucial since costs for Port Authority have also risen during the pandemic. The authority has already cut about 25% of service since the pandemic began, but cleaning efforts and disinfecting have increased exponentially to stem the spread of the virus. Port Authority is spending an additional $200,000 a week to keep transit vehicles clean and providing personnel with protective equipment.  Brandolph added that Port Authority hopes to have an estimate soon to see if the federal funding will cover the agency’s losses.

“Costs are higher than usual, particularly those associated with our efforts to clean and disinfect vehicles on a daily basis,” said Brandolph. “We hope to have an estimate on the financial impact of the COVID-19 pandemic through the end of our fiscal year by the end of today.”

A full breakdown of how much each Pennsylvania metro area will receive is listed below: