Yesterday, the Baldwin home of Sean Troesch was raided by special agents from the United States Postal Service, who confiscated eight large garbage bags of suspected undelivered mail, according to KDKA.

The office of USPS Inspector General didn’t mention Troesch by name in its statement, but did confirm the carrier had worked for the past several months out of the Mt. Oliver Post Office. Troesch is also listed as an occupant of the raided Baldwin home on Meadowcrest Road.

“Special Agents recovered several different classes of mail, including business mail, flats, and small amount of first class mail. We expect to perform a piece count of the mail tomorrow, and make arrangements to have the mail delivered to customers as soon as feasible,” the statement said.

According to screenshots of a Facebook page apparently belonging to Troesch, the mail carrier has been trafficking in conspiracy theories related to QAnon for at least the last several months. QAnon is a baseless pro-Trump conspiracy theory that falsely believes elites and Democrats are running an underground child prostitution ring and eating babies. Belief in this conspiracy theory has been growing over the years, and many QAnon supporters have been seen at Trump rallies.

The Facebook screenshots below are from a profile belonging to someone identifying themself as Sean J. Troesch. That profile has since been taken down, but the source who sent the screenshots to Pittsburgh City Paper said the profile was up as of 7 a.m. this morning. Additionally, Allegheny County voter registration records show a Sean J. Troesch registered to the Baldwin address of the home that was raided.

One screenshot from Troesch shows a cartoon meme implying the mainstream media is ignoring a huge child trafficking and pedophilia ring in favor of covering Black Lives Matter protests. The assumption that there is a large-scale trafficking and pedophilia ring in America is false and has been debunked by several news outlets, including the Huffington Post and the Daily Beast. 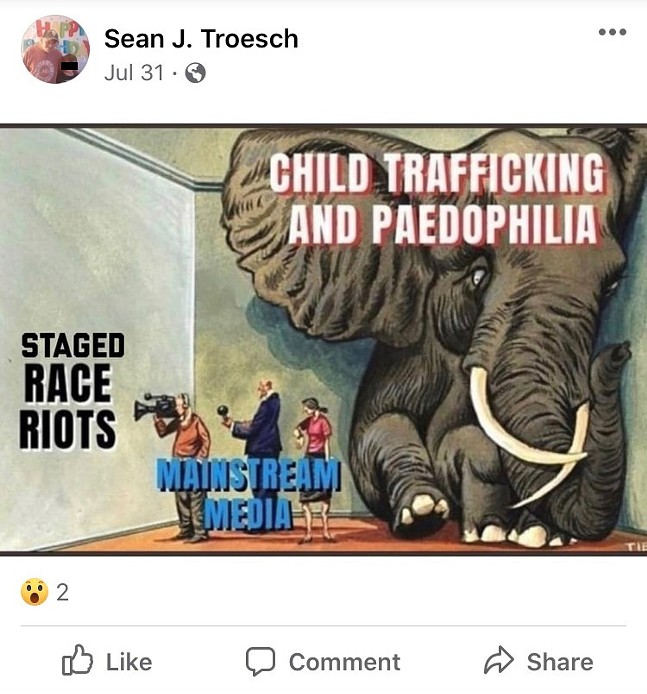 Other screenshots from Troesch show him sharing posts from Liz Crokin, a conspiracy theorist and self-declared follower of QAnon. Crokin has shared baseless and insane conspiracy theories, including that model Chrissy Teigen was connected to Pizzagate. In fact, Troesch shared a post from Cronkin in June claiming just that. In July, Troesch shared a post from Crokin about the now-debunked conspiracy theory that online shopping site Wayfair was somehow involved in a child trafficking ring. Troesh’s account has also shared posts about Jeffrey Epstein, claiming that Hillary and Bill Clinton were somehow involved in his death. 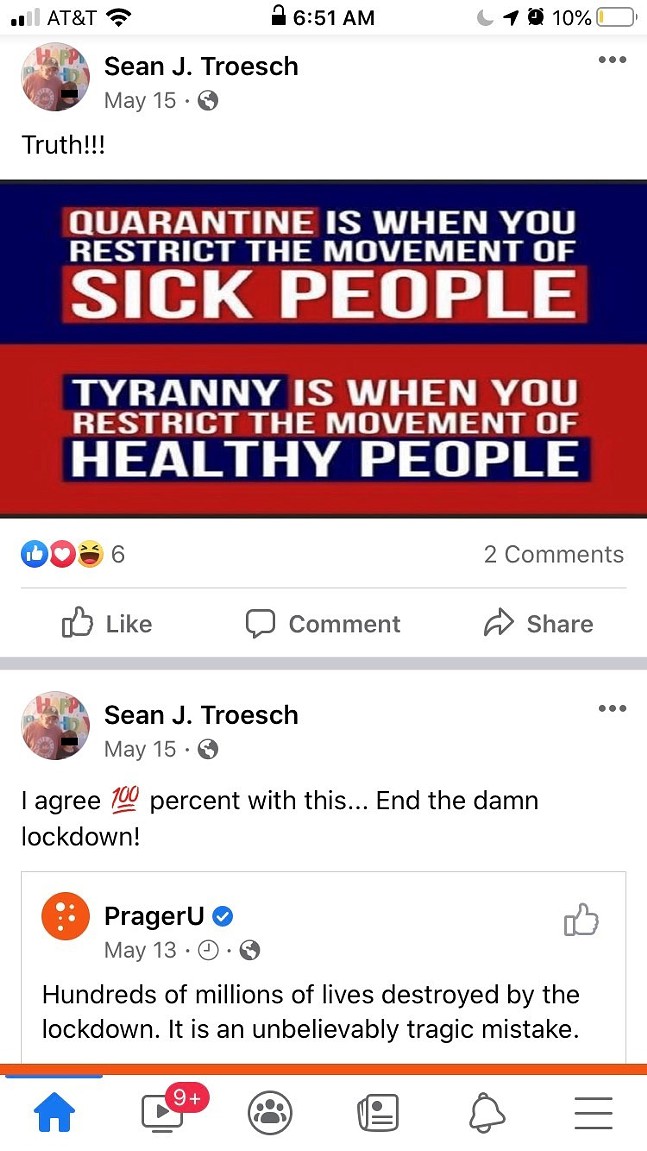 In addition to QAnon support, the Troesch account also shared anti-quarantine posts on May 15. There were 31 new coronavirus cases in Allegheny County that day, which was the first day that the county moved into yellow phase of Gov. Tom Wolf’s reopening plan.

The USPS Inspector General office is turning its findings on the Troesch raid over to the U.S. Attorney’s office for a criminal investigation.