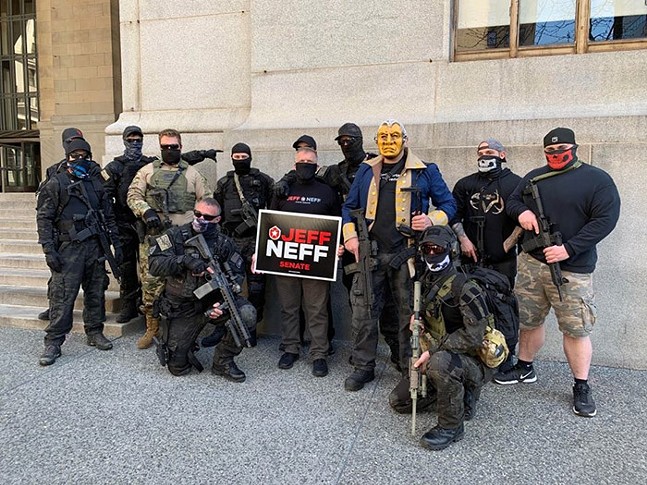 A photo, shared with Pittsburgh City Paper by an anonymous source, of Jeff Neff at the "Take Back Control" rally in Downtown Pittsburgh on Mon., April 20.
On April 20, about 120 protesters took to Grant Street in Downtown Pittsburgh to protest the stay-at-home orders and business closures that have come in the wake of the coronavirus pandemic.

But for at least two local political candidates, it offered an opportunity to campaign, and that isn’t resting well with some people in the Pittsburgh area.

State House candidate Danny DeVito (R-Carnegie) and state Senate candidate Jeff Neff (R-Sewickley) campaigned during the protest. (DeVito is not related to the famous actor, who has been advocating for people to stay home and follow social distancing guidelines during the pandemic.)

DeVito, who walked around the protest with a campaign sign, told TribLive that he was there because he disagreed with Gov. Tom Wolf’s orders to close down businesses. “I think the governor is totally incompetent,” said DeVito, who is running in state House District 45, which includes Emsworth, Coraopolis, Carnegie, Robinson, and Kennedy Township.

But some Pittsburghers on social media took exception to the campaign's presence at the protest and criticized the candidates for failing to follow social distancing guidelines outlined by the Centers for Disease Control and Prevention. Additionally, City Paper reported about a militia group at the protest wearing patches showing a Valknot, a symbol that has ties to white nationalism, and was followed by criticism of the campaigns for cozying up to the militia group. CP photographer Jared Wickerham witnessed DeVito shaking hands with one of the militia members, and a photograph shows Neff posing with the militia members with his campaign sign.

In a statement to CP, DeVito said he was proud to rally with small business owners and said he would never stop fighting for Pennsylvania’s “silent majority.”

“Pennsylvanians from every background, age, and ethnicity stood strong as one family of American patriots against Governor Wolf and the multinational corporations that are using this as an opportunity to drown Pittsburgh businesses,” said DeVito.

In a Public Policy Polling poll taken from April 20-21, the vast majority of Pennsylvanians (81%) said that we are currently practicing the correct levels of social distancing or we should be increasing social distancing measures. Only 17% of those polled said Pennsylvania should relax social distancing rules during the pandemic. Additionally, reports have indicated that many anti-quarantine protests across the country were organized and marketed by large and wealthy groups that have ties to the Republican Party.

DeVito went on to say "Ryan Deto [CP News editor] is a third rate (at best) activist reporter who never tried to interview me at the rally.” (CP’s initial reporting was focused on the militia group, not political candidates.) DeVito also claimed a story about Cavo night club owners at the protest (written by CP senior writer Amanda Waltz) was a "hit piece." He went on to say "[Deto is] a bay area beta male, he hides behind the keyboard to attack sports commentators, club owners, and other Pennsylvanians to say things that he would never say in person.”

“The City Paper, which is most often used to protect car seats from pizza grease, can eat shit," said DeVito in the statement.

When CP reached out again to DeVito requesting a phone interview to talk about why he was at the protest, his campaign chair Brittany Bricen said DeVito was in conference calls the rest of the day with small business owners. Bricen added that CP had the chance to interview DeVito at the rally and that CP lacks “journalistic integrity.”

Neff didn’t respond to a request for comment, but did tell the Beaver County Times that he has met dozens of people on the campaign trail and he doesn't “conduct background checks when taking photos with people at events.” Neff is running for state Senate District 37, which covers most of southern and western Allegheny County.

“I must have taken more than two dozen pictures with people at that rally and some of these guys looked like they were there to legitimately protect participants,” said Neff. “All I can say is this is something that every political candidate must deal with in 2020 because every picture is over-analyzed, and, inevitably, political opponents try to capitalize on them.”


Here's a photo of Republican state Senate candidate Jeff Neff posing with the armed militia group that called CP "the enemy of America" when I asked about Volknot symbol on their arms & its links to white nationalism. Neff is Sewickley's council president and running in SD-37. pic.twitter.com/kFSkIPC8aS

Other GOP elected officials are walking a much finer line. State Sen. Camera Bartolotta (R-Monongahela), who is chair of the Senate Republican Campaign Committee and supporting Neff’s primary election opponent Devlin Robinson, said Neff’s decision to take a photograph with the militia members undermines the argument made by the GOP that the state can be responsibly reopened from the closures.

“The idea that he would be willing to just jump into a group of people merely because he saw that they were getting noticed by the media and not even think about what these individuals represent,” said Bartolotta. “It’s just bad decision making, really bad decision making.”

Neff also currently serves as council president for Sewickley Borough. Fellow Sewickley councilor Christine Allen said that dozens of community members have contacted them about concerns over the photo with militia members.

“I’m deeply concerned and stand in strong opposition to Jeff Neff’s disregard for public health, defiance of the Stay At Home Order, and association with white nationalism,” said Allen in a statement sent to CP.

Allen is calling for a special council meeting to address Neff’s presence at the protest. At least three Sewickley councilors have to call such a meeting for it to occur, and so far, others have not joined that call.

UPDATE: 11 a.m., Sat. April 25:
State Senate candidate Jeff Neff issued an apology on his campaign Facebook page. Neff reiterates that he has taken many photographs with people throughout his political career, and wrote that he is "still shocked at how much attention this one picture has gotten over the last few days."

"I've seen how polarizing this picture has become and apologize if it has offended anyone," wrote Neff. "I have also witnessed how far a picture can be taken out of context. While I'm disappointed that my political opponents are scrambling to try and capitalize on it, I also expect such when I stepped into the political arena. Just know that I will learn from this experience and try my best to avoid a similar situation in the future."