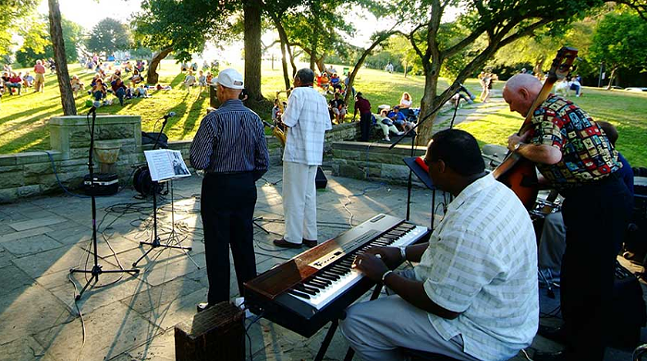 Photo: Courtesy of the city of Pittsburgh
Jazz band in Riverview Park
A sense of normalcy is returning to Pittsburgh, as outdoor concerts are coming back this summer. The city has announced a list of in-person events to partake in over the course of the summer including weekly free concert series featuring classical stylings and jazz performances, as well as various recreational activities.

Pittsburgh City Paper has all the information about the in-person activities that are returning to the Pittsburgh city parks this season.

Pack your favorite brunch dishes, and head over to Mellon Park for the most soothing picnic. Sunday mornings at Mellon Park in Shadyside will now be accompanied with local orchestras performing classical melodies by Bach, Beethoven, and more. The first concert launches on July 11 with a performance by Aeolian Winds of Pittsburgh.

The city invites the most soulful and talented musicians to perform for the return of the annual Reservoir of Jazz. As the sun sets over Highland Park, feel the groove during the performances of live jazz music. Performers are to be announced soon.

Is there a better way to admire a clear, night sky than listening to live music? Stars at Riverview Jazz is a continuous evening series at Riverview Park in Observatory Hill that presents the best jazz musicians the city has to offer. The first concert kicks off on July 10 with a performance by the renowned trombonist Reggie Watkins alongside his quartet.

Aside from the ongoing summer concerts, recreation centers across the city will also reopen on June 28. There are program and capacity limits and other health precautions, according to a press release.

Most recreation centers will begin operation of their summer camp programs and will also reopen gym and fitness rooms for general public use including Ormsby, Brookline, Magee, and Warrington Rec Centers.

The press release also says Citiparks will continue their grab-n-go food distribution for youth through the Summer Food Service Program at over 40 locations. The full list of locations can be found here.