CP Photo: Jared Wickerham
Members of the Abortion Defense Committee rally in Schenley Plaza to commemorate 49 years of Roe V. Wade on Jan. 22, 2022.
On Jan. 22, abortion advocates in Pittsburgh and across the country marked the 49th anniversary of the Supreme Court decision in Roe v. Wade that guaranteed the right to an abortion. Local abortion providers and advocates wonder: will it be the last?

The Supreme Court heard arguments on Dec. 1 of last year in Dobbs v. Jackson Women’s Health Organization, on the Mississippi state law banning almost all abortions after 15 weeks of pregnancy. If the court allows the Mississippi ban to stand, experts believe it will significantly weaken or even overturn Roe.

“It is really important that we stay focused on understanding that these bans like what we’re seeing in Mississippi could potentially happen in a state like Pennsylvania,” Etheredge says.

Without Roe, states will be free to pass abortion bans as they see fit. In October 2021, the Guttmacher Institute, a national reproductive health policy organization, published a list of 26 states “certain or likely to ban abortion without Roe.” Although neighbors Ohio and West Virginia made the “certain” or “likely list,” Pennsylvania did not.

Etheredge’s words proved prescient last week when the Pennsylvania State Senate Health and Human Services Committee approved a bill seeking to amend the state constitution to specifically declare that people in Pennsylvania do not have the constitutional right to have an abortion. If the proposed constitutional amendment passes consecutive legislative sessions, Pa. voters will see a referendum on the future of abortion rights in the state.

Pa. Gov. Tom Wolf, a Democrat, has vowed to veto any legislation restricting reproductive rights in the state, and the proposed anti-abortion amendment is just the latest in the GOP’s ongoing strategy to bypass that commitment.

And many worry that with his term coming to an end, a Republican governor — and thus, a potential anti-abortion governor — could be in Pennsylvania’s future.

Although abortion rights are imperiled by legislative and political attacks, abortion providers and advocates in Pittsburgh want to make it clear that you can still get an abortion here and financial assistance is available. Concerned Pittsburghers, advocates say, can help by donating to abortion funds, supporting local abortion providers and their workers, knowing the facts, and being ready to mobilize politically to stop the proposed constitutional amendment. 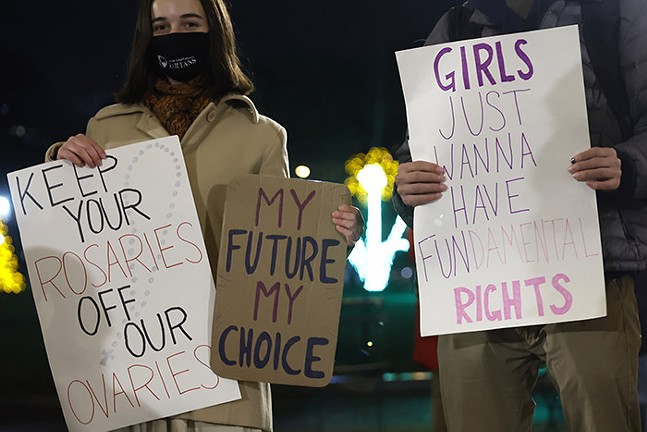 Crystal Grabowski, an abortion care worker at one of the above providers, says these four providers serve all of Western Pennsylvania and then some. “We get people from State College,” Grabowski told City Paper. “We get patients from eastern Ohio and northern W. Va. They’re coming from pretty far away and that’s a pretty small number of providers for a very large area.”

One of the many challenges of abortion access, Grabowski says, is that it’s very time sensitive. Roe protects abortion rights only before a fetus becomes able to live outside the womb, but also, the further along one’s pregnancy is, the more expensive the procedure.

Grabowski says that abortion prices in Pittsburgh vary based on the provider and the patient’s situation, but range from $435 to $500 for an early procedure and can go past a thousand dollars depending on how far along they are. Both Planned Parenthood and Allegheny Reproductive Health Center offer need-based financial assistance to patients.

So what should Pittsburghers who care about abortion access do to help protect it?

Grabowski, who is on the board of directors of Western Pennsylvania Fund for Choice, Allegheny Reproductive Health’s abortion fund, recommends that Pittsburghers concerned about abortion access donate to an abortion fund. “The abortion funds are already starting to campaign pretty hard for fundraising because we’re gonna need a lot of money, because people are driving further, they can’t work cause of the pandemic, they have to stay home with their kid because of schools, there’s just so many things going on that need is so incredibly high,” she says.

“If Roe v. Wade falls, we could see a ban in Ohio, which means that a lot more Ohio patients will need to come [to Pittsburgh],” she says. More people seeking appointments means longer wait times and higher costs for everyone, according to Grabowski, who adds, “Financial assistance is going to be needed more than ever.”

Just as patients will need more support, says Grabowski, so will abortion providers. “It is rough working in this field right now,” Grabowski says. “Supporting Allegheny Reproductive Health Center, supporting Planned Parenthood as organizations and also their workers is going to be really necessary.”

Grabowski also wants to make sure people know the facts. “Misinformation is so rampant with this topic,” she says. “We need to get the facts out there: you can obtain abortions in Pittsburgh, financial assistance is available, stay away from crisis pregnancy centers. There are people who will support you,” Grabowski says.

Crisis pregnancy centers, which can be found in Pittsburgh, are what abortion-rights advocates call “fake clinics,” and are typically run by churches, religious groups, and other anti-abortion organizations. Their mission, according to abortion-rights advocates is to advance an anti-abortion, often religiously motivated, agenda rather than provide sound, medical advice. 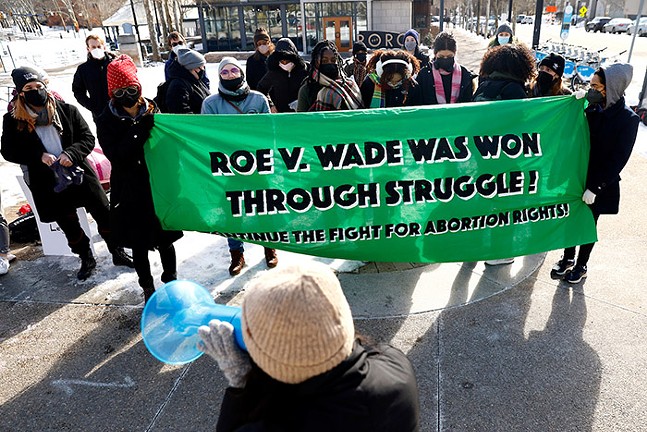 Luna Rooney rallies a group during the Abortion Defense Committee protest in Oakland on Jan. 22, 2022.
Luna Rooney of the newly formed Abortion Defense Committee, a Pittsburgh organization made up of students, abortion advocates, and workers, which recently held a rally in Schenley Plaza to commemorate 49 years of Roe V. Wade. Rooney tells CP it’s important for local supporters of reproductive rights to brace themselves for the long haul. “Our slogan is, ‘may the struggle continue,’ because we know that this is a long term fight and we are prepared to fight,” Rooney says. “The right to abortion is the right to health care.”

In terms of state-level politics, Rooney and Grabowski recommend keeping an eye on both this fall’s gubernatorial election and the proposed constitutional amendment.

Gov. Wolf, currently in his last year in office, has been a strong supporter of abortion rights in the commonwealth. “Since taking office, there have been six different anti-abortion bills introduced by members of Pennsylvania’s General Assembly,” Gov. Wolf said in a Jan. 25 statement. ”I have vetoed three of those bills placed on my desk for signature and vowed to veto the rest.”

Although some Pa. Republicans have pivoted to using constitutional amendments to advance their agenda in lieu of gubernatorial support, abortion advocates will miss the democratic governor’s commitment to vetoing anti-abortion legislation.

“Wolf's veto pen has stopped multiple attacks on abortion access in Pennsylvania,” Signe Espinoza, the interim executive director of Planned Parenthood Pennsylvania Advocates told online news site City & State Pennsylvania. “Without that commitment to block all the anti-abortion attacks we've seen, barriers to accessing care would be much harder than they already are for most people in the state.”

In addition to working to elect a governor committed to protecting reproductive rights in Pennsylvania, Grabowski and Rooney say Pittsburghers need to be ready to mobilize to reject the proposed constitutional amendment. “This is definitely something we should all be talking about in case it gets far — we might need to be very vocal and take actions by 2023,” says Grabowski. “The best thing right now is to be informed and be ready.”
This story has been updated at 12 p.m. on Feb. 2 to clarify that the proposed constitutional amendment will only have to pass the legislative branches to trigger a referendum.

This story has been updated at 5:15 p.m. on Feb. 3 to reflect the fact that AHRC performs abortions within the first 23.6 weeks of pregnancy.