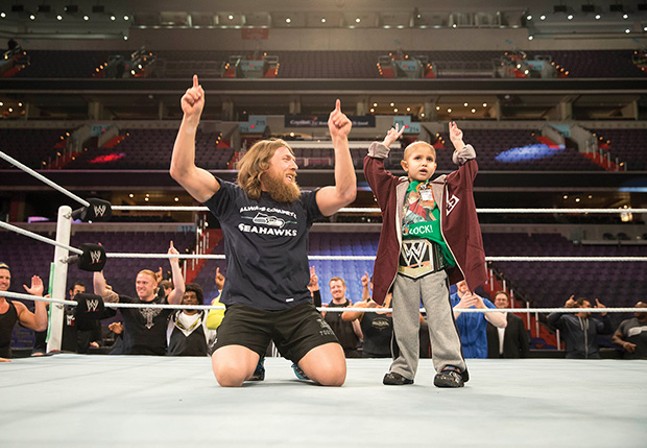 It was in Pittsburgh that WWE superstar Daniel Bryan formed a friendship with the late Connor Michalek. For the Extreme Rules show at PPG Paints Arena on Sunday, Bryan returns to wrestle in Pittsburgh for the first time in years.

Daniel Bryan is a superhero to many. And any opportunity for him to perform in front of the WWE Universe is sure to generate headlines because everyone thought his career was over.

Bryan wasn’t actually a superhero. He was seriously injured and unable to perform because of damage from years of hard bumps in the ring.

But now, Bryan is back, and his return to Pittsburgh as a wrestler for WWE Extreme Rules at PPG Paints Arena is the headline for Sunday night. He is coming back to wrestle in the city where he first met a boy who embodied heroism.

In December 2012, Connor Michalek — then only 6 — was grappling with cancer of the brain and spine. Bryan “Daniel Bryan” Danielson instantly connected with Connor “the Crusher” Michalek.

It was beautiful to see a megastar such as Bryan being a fan of somebody else, smiling every time he caught up with Michalek. They became fast friends, meeting again in October 2013, and staying in touch until Michalek’s death in April 2014.

Their friendship transcended the human body’s limitations. Bryan is arguably the most famous advocate for the pediatric cancers charity that honors Michalek: Connor’s Cure. Upon inducting Michalek into the WWE Hall of Fame in 2015, Bryan noted the “fiction” of a professional wrestler’s matches to contrast the “real” fight Michalek put up against cancer.

WWE has formed a real partnership with Children’s Hospital of Pittsburgh. Chief brand officer Stephanie McMahon sits on its board and co-founded Connor’s Cure. McMahon has feuded with Bryan as part of WWE stories, but she, he and all of the company’s talent break character when visiting sick kids at the hospital before shows in Pittsburgh.

But it’s the character Daniel Bryan — an undersized underdog who is always overcoming obstacles — that fans are most excited to see perform Sunday night.

He has not wrestled a match in Pittsburgh in more than three years. Concussion symptoms sidelined him from February 2015 until this past April, when he wrestled in front of 70,000-plus at WrestleMania in New Orleans. Bryan received a hero’s welcome that evening for a return to the ring that was a triumph of scripted entertainment and human spirit.

It’s fitting that Bryan has reformed the Team Hell No tag team with Kane to wrestle Sunday night, because this duo was WWE’s most popular unit when Bryan met Michalek. Bryan and Kane haven’t held a tag-team championship since 2012. Their opponent at Extreme Rules, the Bludgeon Brothers, hold WWE’s Smackdown tag title.

Extreme Rules is smaller in scale than WWE’s big pay-per-view events (WrestleMania, SummerSlam, Royal Rumble, etc.), but this show’s size is likely to be eclipsed by an unforgettable moment.

Connor “the Crusher” Michalek’s story is still being written because of Connor’s Cure. And his favorite wrestler, Daniel Bryan, is coming back to wrestle in Pittsburgh.