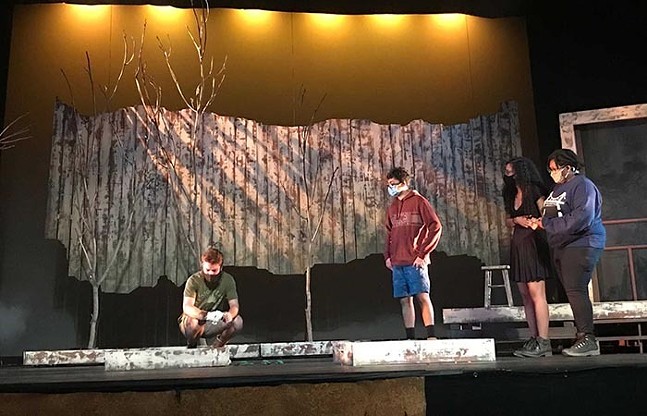 Written by Marisela Treviño Orta, Somewhere follows two siblings who track down the last monarch butterflies in the world after almost all the insects in the world are gone. The show marks the first live performance at Pitt's Charity Randall Theatre since COVID-19 first hit.

Somewhere director Ricardo Vila-Roger says he's a big fan of the Latina playwright, and chose this play specifically because of its relevancy to a world now dealing with a pandemic and a climate crisis.

“There’s a lot of Greek mythology, and there’s a lot of Mexican-American mythology embedded and woven throughout the play,” he says. “But it’s also like coming to adapt to a new world, which we’re going through right now. There’s a mysterious illness that weaves through it that everyone’s unsure about. So it also hits close to home.”

A big part of the play centers around the butterflies, all presented as puppets controlled by three puppeteers who are incorporated into the show.

“We decided to lean into that mythology that is woven throughout the play. So they are essentially the Three Fates in more Greek-inspired costumes, and they are basically leading the action to its final conclusion,” says Vila-Roger said.

Additionally, the show follows Mexican folklore with the meaning of the butterflies' migration. In Mexican mythology, butterflies bring the dead with them when they migrate, which leads to the Day of the Dead. Although unplanned, the show happens to be performed just over a week before Day of the Dead.

One of the big messages in the show is about climate change, and the cast and crew have taken it to heart, as most of the set, props, and costumes are made up of recycled and thrifted items.

“We’re really trying to make the whole process sustainable,” Vila-Roger said. “So it’s not like we’re showing this cautionary tale about the environment but we’re being wasteful. So I’m really excited about that.”

Vila-Roger is eager to tackle the subject of climate change, as he usually focuses on shows about ethnicity and finding community. The topic will be new ground for him to cover, and he is excited to take it on with this play.