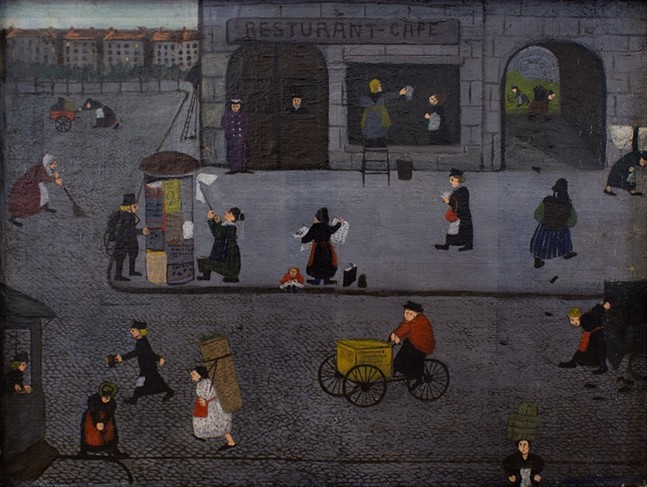 The UAG recently opened Mary Ethel McAuley: Behind the German Lines and Three Artists (Three Women). Presented by Pitt’s History of Art and Architecture department in collaboration with the Associated Artists of Pittsburgh (AAP), both shows are now on view through March 28 in the Frick Fine Arts Building.

“The beauty of both of these exhibitions is that they speak to rich past, present, and future of women artists working in this region,” says AAP executive director, Madeline Gent, in a press release.

Behind the German Lines focuses on the work of McAuley, a Pittsburgh native and one of the first AAP members. Born in 1882, McAuley worked as a reporter, author, illustrator, painter, and teacher. Though she appeared frequently in exhibitions and in print, including her 1917 book, Germany in War Time, which recounts the two years she spent as a wartime correspondent in Germany during the First World War, her work is largely forgotten today.

“We hope that this exhibition is not the last word on the artist, but rather the start of renewed interest in and questioning of McAuley’s works and her career,” says UAG director Sylvia Rhor. “Many of the issues and challenges she faced and the subjects she explored are still relevant today.”

The show includes 10 paintings, on loan from collectors Rebecca and Tasso Spanos, depicting life in Germany during the First World War, and capturing “the nuances of quotidian life” in the country at that time. This includes scenes of women building train lines and shoveling coal, and mothers and children alone on the streets while male relatives were on the front line.

The collection is believed to be the artist's only surviving paintings.

University Art Gallery
The Butter Line, Mary Ethel McAuley
Parallels between the paintings and Germany in War Time are clear, as an online version of the book contains many photos of women workers, soldiers, and children in Berlin. (The book even contains a detailed list of the food McAuley ate in Germany when many items were unavailable or rationed.)

“Finding those common threads between their work is exciting, but even more so are the differences," says Gent. "And these four artists are just a tiny portion of the great range of art by women who call this area home.”

The dual exhibitions are part of a UAG initiative to highlight the work of women artists. Started by the Feminist Art Coalition, this initiative serves to mark the centennial of the 19th Amendment giving women the right to vote and shed light on the inequities women artists continue to face in the arts and cultural arena.

The initiative doesn’t stop at the two exhibitions. In March 2020, the UAG will inaugurate its Say Her Name Feminist Reading Room + Maker Space, to be located in its rotunda. The UAG will also debut an exhibition of the Selma Burke Art Center in the fall.

Checking in during quarantine: Chris Dos of Anti-Flag