The student cast performs with the instincts and precision of actors far beyond their years. 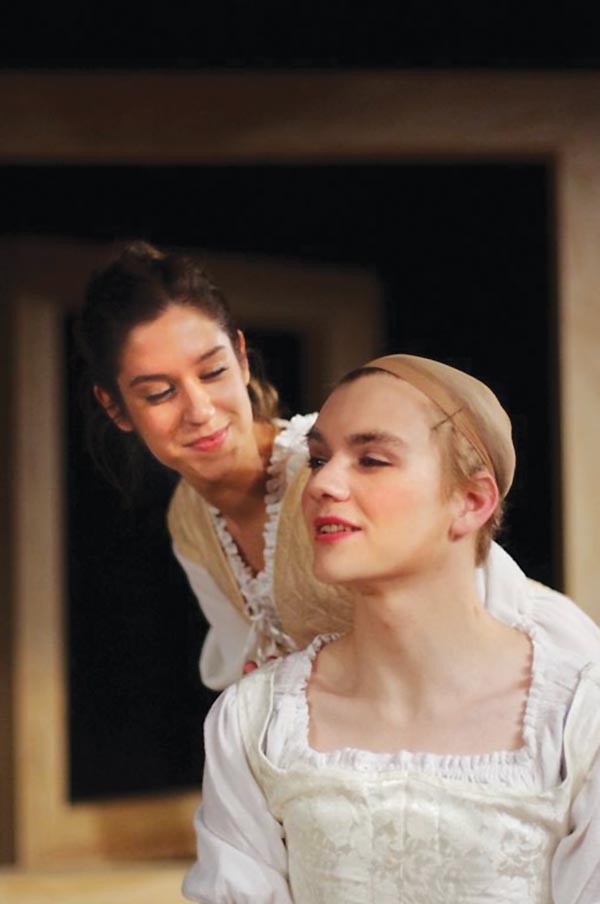 When we meet Edward Kynaston, he's kind of a bitch. He's a self-obsessed actor, which is bad enough, but he's also a flirt, a prankster and a spitfire. Kynaston has one talent: He can play women onstage. That alone seals his fame. But when demand for his skills declines, Kynaston falls hard.

If The Compleat Female Stage Beauty weren't an historical drama about cross-dressing Restoration actors, it might be a sports movie. Kynaston rises to fame, he's ruined by hubris, he sulks in obscurity, and then returns for a final chance at the gold. But Jeffrey Hatcher's 1999 play is also about fame and femininity, arrogance and sabotage. Kynaston's London is a cesspool of moneyed fops and vengeful dandies, and when they get irate, the gloves come off. Literally.

The University of Pittsburgh Repertory Theatre presents a resplendent Stage Beauty, complete with lavish costumes, credible dialects and even decent fight choreography. The student cast exceeds all expectations; they perform with the instincts and precision of actors far beyond their years. Stage Beauty is over two hours long, and in the epic style of The Libertine and Amadeus, the script requires numerous scenes and twice as many powdered wigs. Director Dave Bisaha keeps the pace steady, and even a drawn-out rehearsal scene boils with suspense.

What's especially nice about Stage Beauty is its unpretentious ambitions. Bisaha doesn't tinker with the play; he doesn't try to deconstruct its intention. This show is not about gender, nor is the London stage a metaphor for capitalism or class struggle. Bisaha focuses on Edward himself, a young man groomed to play only one part. He may be unpleasant, but he's also a puppet to powerful people, and when female actors arrive to replace him, he fights dirty. After all, he's fighting not only for his life, but for his very purpose.

Every one of these performers deserves a storied career on stage, and I wish them all well. But if there is space for only one gushing compliment, let it go to Dylan Marquis Meyers, who plays the titular Stage Beauty. Edward is tossed about a stormy emotional sea, and Meyers savors every moment. Professional theaters look out: A star is forming.