"You don't see this as a case of white people rescuing poor benighted black people." 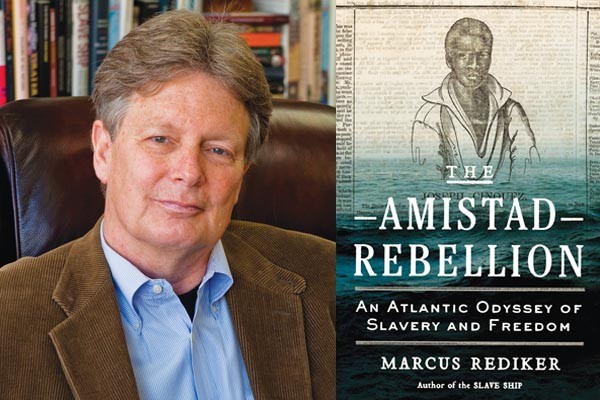 The best-known account of the 1839 rebellion aboard the Spanish slave ship Amistad — Steven Spielberg's eponymous 1997 movie — echoes most other versions: It's told mostly from the point of view of white people, and climaxes with the Supreme Court case freeing the Africans.

But University of Pittsburgh historian Marcus Rediker saw the story as much more dramatic and provocative when viewed from the perspective of the Africans themselves. His new book The Amistad Rebellion (Viking) explores how the captives' West African culture informed the shipboard rebellion, their response to subsequent imprisonment in Connecticut — and even their own legal defense.

"No one who had written about the Amistad rebellion in the past had been very interested in that part of the story, and in my view it's the key to everything," says Rediker, who specializes in Atlantic history.

He grew interested in the Amistad story while researching The Slave Ship, his acclaimed 2007 book about the unique culture of slaves, slavers and sailors that developed, largely in transit, aboard those infamous vessels. The Amistad Rebellion begins not at sea, but in what's now southern Sierra Leone, where most of the Amistad Africans came from.

Drawing on copious but sometimes long-overlooked sources, Rediker shows how the Africans' sense of a collective (as opposed to individualistic) identity, and their particular form of social organization, allowed their rebellion to succeed, and kept them unified throughout their imprisonment and numerous court trials. Working under leaders like the warrior Cinque, the Africans created this unity even though they hailed from distinct societies.

Also fascinating is Rediker's exploration of the Africans' complicated relationship with the abolitionists working to free them — activists who themselves often characterized the Africans as mere victims.

"You don't see this as a case of white people rescuing poor benighted black people," he says. "You see a common struggle."

The book also emphasizes the extraordinary popular interest in the case, through which the Africans became unlikely heroes. And while famous white Americans like John Quincy Adams certainly played their parts, putting the Amistad Africans at center stage shows how they personally helped pave the way for slavery's eventual demise.

"I try to emphasize not just the poor people who were left out of history, but their history-making power," Rediker says.