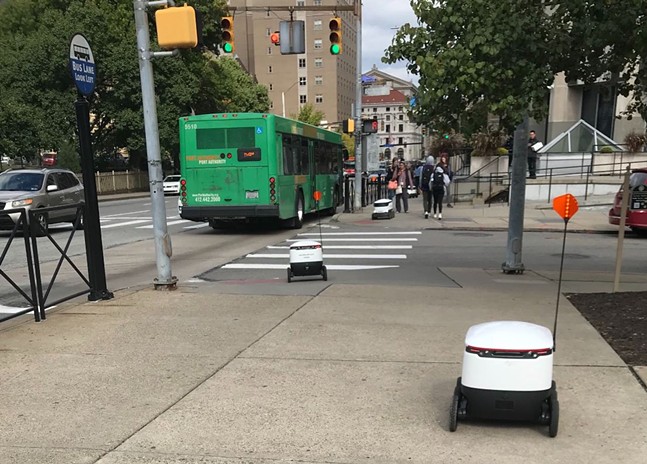 CP photo: Elise Lavallee
A line of Starship delivery robots on Fifth Avenue sidewalk in Oakland
If you have visited The University of Pittburgh’s campus in the past week, you’ve likely noticed the cute, six wheeled Starship Technologies food delivery robots rolling about Oakland. The innocent-looking robots, however, are proving more dangerous and inconvenient for people with disabilities than proponents thought.

Emily Ackerman, PhD student at the University of Pittsburgh and wheelchair user, was trapped by one of the robots at an intersection Forbes Avenue Monday afternoon. According to a now viral tweet from Ackerman, one of the robots had stopped in the middle of a curb cut — the section of an elevated curb that has been cut out to make a level passage between the street and sidewalk — blocking her access to the sidewalk.


i (in a wheelchair) was just trapped *on* forbes ave by one of these robots, only days after their independent roll out. i can tell that as long as they continue to operate, they are going to be a major accessibility and safety issue. [thread] https://t.co/JHo5PlzMFs

“It's terrifying because there is nothing I can do in the moment” Ackerman tweeted on Monday. “I am not going to have my safety compromised because a non-sentient robot isn't advanced enough to know that it's putting me in danger.”

The university quickly responded to her tweets, saying they had suspended the testing of the robots until everyone’s safety could be guaranteed, as first reported by The Pitt News.

We have paused testing to review the technology further and ensure everyone’s safety. We value your feedback and someone from Pitt will be in touch to learn more about your experience.


Starship also reached out to Ackerman via Twitter, asking for her to share more about her experience, ensuring they were urgently looking into the matter.

Henry Harris-Burland, Starship spokesperson, told The Pitt News Tuesday the robots are meant to stop behind the curb cut and Ackerman’s experience was due to a mapping issue. Harris-Burland apologized to Ackerman, and ensured measures are being taken to resolve the issue.


Dear Emily, could you DM us so we can get in contact to discuss this further, please? We are urgently looking into this matter.

But, a day later, Starship rescinded their apology after reviewing the video taken from the robot that Ackerman interacted with. According to The Pitt News, Harris-Burland said the video showed Ackerman traveling “past the robot without stopping.”

Ackerman told The Pitt News that she still  defended her use of the word “trapped,” because she was referring to the change she had to make to her path.

But intersections aren’t the only place where the robots are interfering with accessibility. Heather Tomko, a Public Health researcher at Pitt, lifestyle blogger and wheelchair user, found herself stuck on the sidewalk outside of Litchfield Towers when one of the robots stopped in the middle of the sidewalk. Tomko was unable to navigate around the robot on either side, according to The Pitt News. Tomko also pointed out on Twitter the robots might not be able to be used by wheelchair users like herself due to an inability to raise up and down to be within reach.

Further speculation from Oakland residents, Pitt students, and accessibility advocates on Twitter suggests the problems faced by wheelchair users are only a portion of the problems. Because of the robots' height and potential to stop on curb ramps — which are often equipped with tactile paving — the robots can pose a threat to the visually impaired. In addition, the reliance of auditory signaling may prevent the hearing impaired from being able to use the robots altogether.