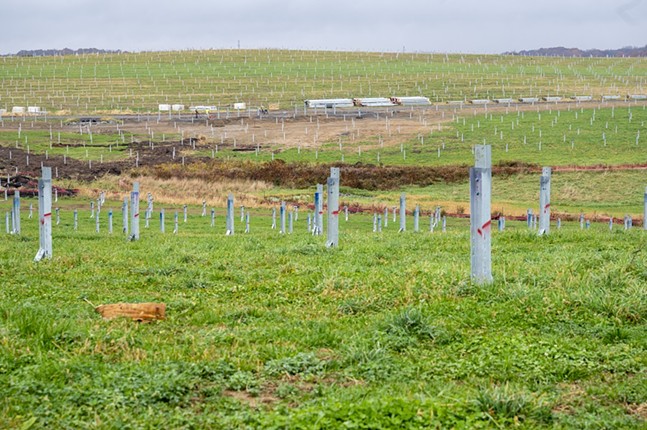 Construction is underway on one of the largest solar projects in Western Pennsylvania. The Gaucho Solar Project is a new, 20-megawatt solar farm near Pittsburgh International Airport. The project will supply electricity to the University of Pittsburgh for the next 20 years.

The Gaucho Solar project will include about 55,000 solar panels constructed on a 68-acre site spanning across Findlay and Independence Townships. The project is expected to be completed and online by mid-2023.

The Gaucho Solar project is expected to produce more than 35,700 megawatt-hours of electricity annually. This means that 18% of the University main campus’ electricity usage per year will be supplied by the project.

The project also will allow the University of Pittsburgh to lower its greenhouse gas emissions by 15,452 metric tons of carbon dioxide per year. This change would be equivalent to taking nearly 3,330 fuel-burning cars off the road. Combined with the University’s commitment to use hydropower in the future, at least 42% of Pitt’s future electricity will come from local, renewable energy sources.

“We are very excited for Vesper’s Gaucho Solar facility to be the largest contributing renewable asset to-date for the University’s goals of producing or procuring 50% of our total Pittsburgh campus electricity from renewables by 2030 and 100% by 2037,” Sharrard said.

The University’s partnership with Vesper is estimated to save it millions of dollars because of solar’s low comparative cost. The direct purchase of clean electricity will not require no upfront or maintenance costs from the University and ensure price certainly throughout the contract.

“Vesper Energy is proud to partner with the University of Pittsburgh to help achieve their goal of 100% renewable electricity powering the campus,” said Craig Carson, CEO of Vesper Energy. “Gaucho Solar is our first project to reach construction in the Keystone State. With great partners like the University of Pittsburgh, we plan to bring more clean energy projects online in Pennsylvania in the near future”

Construction on the project will continue through this winter and will also include pollinator friendly landscaping, as well as an observation area to provide educational experiences for Pitt students.