Lea Pool's documentary pulls the curtain back on the mega-branding efforts that are the many pink-ribbon campaigns for breast-cancer "awareness." 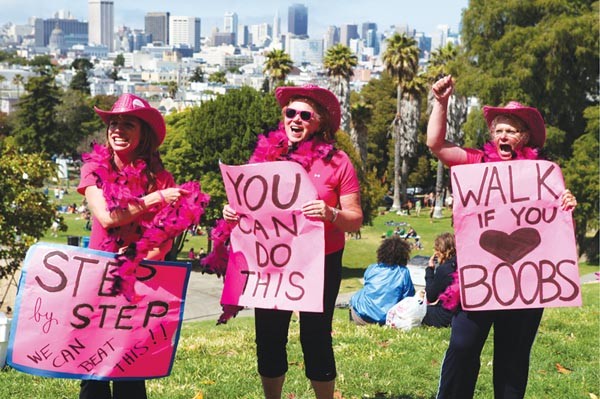 Lea Pool's documentary pulls the curtain back on the mega-branding efforts that are the many pink-ribbon campaigns for breast-cancer "awareness." (Is there anybody left unaware of cancer?) It's an eye-opening film, based in part on Samantha King's eponymous muckraking book.

Pool interviews King, as well as a number of doctors, activists, patients and corporate PR spokespeople. Her film posits that the greatest success of the pink-ribbon campaigns, with all their branded products (from soup and Kentucky Fried Chicken, to Mustangs and hand guns), has been to soften the image of the disease, to allow corporations to look caring and to suppress the tough questions about breast cancer. (Issues of environmental justice are less apt to be raised when pink-ribbon campaigns are funded by, say, cosmetic giants that profit by women slathering on products containing known toxic ingredients.) Pool also shares two illuminating stories on the origin of both the pink ribbon and "breast cancer awareness week" (now month). Hint: Both involve self-interested corporations.

Pool's film makes a cogent argument that what was once an anger-based grassroots effort to protect women's health has morphed into endless upbeat campaign, in which a deadly disease (couched in terms of "awareness") is used to maximize profits while supporters feel good about meaningless actions, such as purchasing pink-ribbon products. Nonstop awareness and fundraising notwithstanding, "at this point," King says, "the perky image of the disease is doing more harm than good."